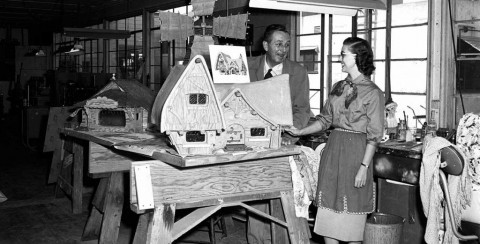 You can’t step foot in a Disney park without marveling over some feat of Disney Imagineering. From the twinkle in José’s eye during “The Tiki Tiki Tiki Room” to the smart-aleck swagger of the red-headed pirate to the way Sleeping Beauty Castle towers over the Hub, Imagineers are responsible for breathing life into Disney’s greatest attractions and most convincing details.

Today, it takes thousands of Imagineers to take new attractions, lands, transportation systems, advanced Audio-Animatronics, shows, and nighttime spectaculars from conception to implementation in Disney’s six theme parks. Back in the 1950s, however, there were just three founding members of Walt Disney Imagineering (then termed WED Enterprises): Fred Joerger, Wathel Rogers, and Harriet Burns. Together, their small team helped shape some of the most iconic attractions in Walt’s original park, including Great Moments with Mr. Lincoln, Pirates of the Caribbean, the Enchanted Tiki Room, even Sleeping Beauty Castle itself.

While all three were pioneers and Disney Legends in their own right, Burns held a unique and coveted distinction as the company’s very first (non-clerical) female Imagineer. Not only did her tenacious, creative spirit and fastidious attention to detail distinguish her among her peers, but her contributions stood the test of time as the parks expanded in scope and style. Here’s a little history about one of the most influential women in Disney Parks history.

From Mousketeer (prop designer) to Imagineer 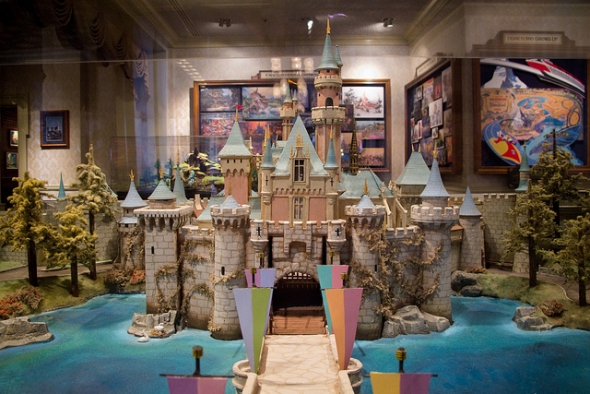 Two years after relocating her family to the sunny clime of Los Angeles, California, Harriet Burns took a job at the Disney Studios. A 27-year-old interior, prop, and set designer, Burns was brought onto The Mickey Mouse Club in 1955 to help design, shape, and paint props for Disney’s new television program. Her timing couldn’t have been more serendipitous. It was a formative year for the company in nearly every division: The Mickey Mouse Club would soon introduce its viewers to the likes of child actors Annette Funicello, Sharon Baird, and Bobby Burgess (not to mention the famously catchy “Mickey Mouse Club March” theme song); the studio would debut its eighth feature-length animated film, Lady and the Tramp; and Walt’s longtime pet project, Disneyland, would begin to revolutionize the theme park industry from the moment it opened its gates to the public.

In the midst of all the hubbub, Burns found ways to set herself apart. Equipped with a degree in art from Southern Methodist University and a keen sense of color and advanced design, she conceptualized and helped build many of the set pieces that were used in the show, including the iconic barn-shaped “Mouse Clubhouse” with its rustic sloped roof, cut-out window, and familiar red-and-white Mickey Mouse logo hanging on the door.

That talent certainly wasn’t wasted on sets and props, but Disney soon devised bigger plans for the young designer. She was invited to expand her responsibilities by taking on projects at WED Enterprises, a humble division which boasted no more than a handful of employees and was something of a glorified model shop during its inception in the mid-1950s. Small as it was, it played a pivotal role within the company. Alongside model-maker Fred Joerger and artist/sculptor Wathel Rogers, Burns operated sanders and drill presses, saws, and lathes as she crafted miniature models of Disneyland attractions for Walt to review. It was her model of Sleeping Beauty Castle—the soon-to-be centerpiece of the park—that she submitted to artists Herb Ryman and Eyvind Earle, each of whom outfitted the turrets and towers in whimsical color schemes of their choosing. (We have Ryman to thank for the pink-and-blue palette of the modern Sleeping Beauty Castle, which eventually won out over Earle’s bolder, jewel-toned prototype.)

And, as Disneyland grew its attractions and special projects in the decades following Opening Day, Burns’ work became more and more integral to the park’s development. 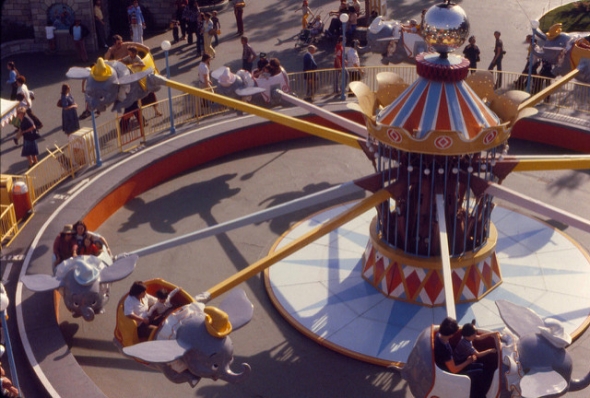 Disneyland opened with 17 initial attractions in the summer of 1955, but it wasn’t long before Walt began adding to the roster. On August 16, less than a month after the park’s debut, Dumbo the Flying Elephant took its place above the tent-like show buildings in the leftmost corner of Fantasyland.

Getting the elephants to Fantasyland had been a long and frustrating process for Disney’s Imagineers, one which required the talents of sculptors Chris Mueller and Blaine Gibson, artist Bruce Bushman, and, once again, Harriet Burns. Each ride vehicle weighed over 700 pounds—an unliftable weight for a carnival-style ride—and the ears that were supposed to flap up and down as boys and girls operated the internal levers continued to malfunction. The most grueling task was set to Burns during one of the ride’s major renovations, when she was tasked with painting a petite figure of Timothy Q. Mouse while sitting astride the top of the attraction.

It took an extra dose of courage for Burns to complete the job while managing her acrophobia, as she later revealed in her memoir (excerpted by Sam Gennawey): “I said to myself, ‘I’m going to do the best job I’ve ever done so I’ll never have to do it again!’”

Away from Dumbo’s posse of flying elephants, Disney kept Burns far more grounded. She tinkered with the intricate miniaturized models for the Storybook Land Canal Boats and collaborated with Joerger, animator Rolly Crump, and designer Claude Coats on the concept of a “Rock Candy Mountain” attraction that would have combined Walt’s love of miniatures with the world of the fantastical and eventually-scrapped spinoff film Rainbow Road to Oz. The former project became a classic after its premiere in 1956, while the latter never made it past the planning stage—and the enormous, candy-decorated model it inspired was ditched in a parking lot once everyone lost their appetite (both metaphorically and physically) for the idea.