3 Amazing Secrets You Might Not Have Known About Epcot's Past

Frozen Ever After wasn’t the first Snow Queen-themed attraction Imagineers planned for the Disney Parks. 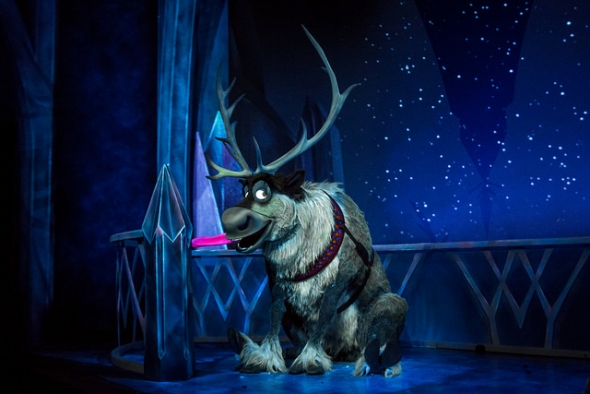 During the fall of 2014, there was what might be described as a minor uproar over the removal of one of Epcot’s long-standing attractions. Tucked into the furthermost reaches of the Norway pavilion, Maelstrom was a log flume ride that transported its riders through Viking villages and fantastical scenes of trolls, polar bears, anthropomorphic trees, and Norwegian water spirits (Nokken). While not the most beloved attraction in Epcot—that honor reserved for the likes of Spaceship Earth, Horizons, and Journey into Imagination—its eccentricity and charm attracted a devoted following even so.

Unfortunately for Maelstrom’s small band of supporters, that all changed with the blockbuster debut of Frozen in late 2013. The film, a very loose adaptation of a Hans Christian Andersen fairy tale called The Snow Queen, became an unparalleled phenomenon among Disney fans and consumers. Not only did moviegoers identify with royal sisters Elsa and Anna (a bit of a departure from the pint-sized Kai and Gerda of the original tale), but they happily flocked to every show, parade, character meet-and-greet, Disney on Ice performance, and specialty dining and merchandise opportunity Disney provided. Even Epcot, a park known for its deliberate departure from the character-centric designs of Disneyland and the Magic Kingdom, did not go untouched.

While Frozen (2013) is set in the fictional kingdom of Arendelle, animators pulled extensively from Norwegian and Scandinavian culture as they shaped the churches, ships, horses, docks, and fortresses that comprised the film’s landscape. It was only fitting, then, that when they began to look for potential locations to establish a permanent Frozen attraction in the Disney Parks, they turn to Epcot’s Norway pavilion. In the summer of 2016, Frozen Ever After made its highly-anticipated debut to an overeager public. Where there used to be menacing trolls, there were, well, mossy, jolly trolls telling stories on the banks of the river. Where there were polar bears, a friendly anthropomorphic snowman named Olaf welcomed guests into Elsa’s ice palace (and, later, a less friendly anthropomorphic snowman named Marshmallow sent the same guests plunging down an icy waterfall). It was the first attraction based, in however slight a fashion, on an Andersen fairy tale since The Little Mermaid – Ariel’s Undersea Adventure premiered at Disney California Adventure in 2011. Or was it?

Nearly forty years before the Snow Queen underwent a radical transformation into the decidedly Disneyfied Frozen, Imagineers had already started to dream up an attraction based on Andersen’s famous tale. According to Disney Legend and costume designer Alice Davis, her husband, Marc, had first dreamed up a Snow Queen-inspired attraction all the way back in 1977.

Of course, this wasn’t exactly the polished, iridescent palace that set the tone for Elsa’s show-stopping earworm, “Let It Go.” Davis’ attraction, termed the “Enchanted Snow Palace” in multiple concept art renderings, appeared more ice mountain than ice castle. From the entrance, in fact, it looked as though someone had tried to carve an enormous troll out of the Matterhorn. In one icicle-fingered hand, the troll clasped a frozen orb within which a snow sprite had been trapped. Around the back of the attraction, riders careened through the mountain, darting in and out of the mouths and grasps of various frozen trolls in order to escape the summer heat.

“This was going to be a ride that Mark had designed for the hot summer days,” Alice explained, “and they would be kept very cold so you’d walk in from the hot, terrible weather outside and you’d have this wonderful, cool weather.”

Frosty-breathed trolls and penguins aside, exactly how the Snow Queen herself—or any of Andersen’s principal characters, for that matter—figured into the attraction was not revealed.

While it’s not remarkable that one of Disney’s legendary animators dreamed up a Snow Queen attraction years before the studio mined the fairy tale for another of its feature films, it’s hard not to wonder how an existing Snow Queen attraction might have influenced today’s animators. Might it have inspired an original franchise, à la Pirates of the Caribbean or flopped like the doomed 2003 live-action treatment of The Haunted Mansion? We’ll never know.