3 Amazing Secrets You Might Not Have Known About Epcot's Past 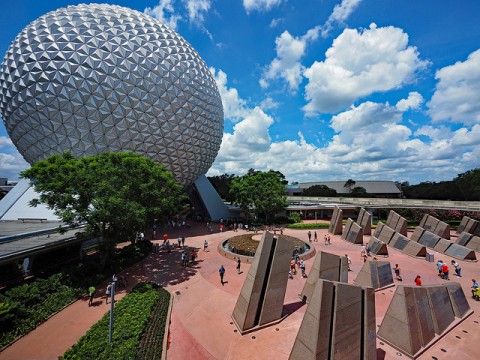 Look up any book, article, or video about Epcot, and you’ll hear it described as a “permanent world’s fair.” If the phrase suggests a state of stagnancy, however, rest assured that nothing could be further from the truth. Disney’s second Florida-based park, Epcot swiftly distinguished itself from run-of-the-mill theme parks—including the more traditional landscapes of Disneyland and the Magic Kingdom—with its forward-thinking attractions and strategically arranged melting pot of international pavilions.

The story of Epcot’s formation is a familiar one to many of today’s visitors. Decades before Disney’s team shaped their $5 million parcel of Florida real estate into something resembling the current Walt Disney World Resort, Walt Disney had already started to cook up his next big project: The Experimental Prototype Community of Tomorrow. Plans for “EPCOT,” as the project was more colloquially termed, were unveiled to the public in the late 1960s when Disneyland was barely a decade old. In a special film called Project Florida, Walt revealed his vision of a near-utopian planned community, one where cars would be rendered all but superfluous by a high-speed monorail and never-stopping PeopleMover and an estimated 20,000 residents (and tourists and businesspeople) would work, play, attend schools and churches, shop, dine, and vacation under a climate-controlled dome. In other words, it was the next evolution of the modern American city—an ambitious undertaking even for a visionary as imaginative and driven as Walt. And soon after his untimely death in December 1966, the project was steered in a very different direction.

As the company moved forward with the development of their East Coast location, plans to integrate a seamless, complex housing and employment facility fizzled out. In its place: Another theme park (divided into the education and tech-focused Future World and nine World Showcase pavilions—Morocco and Norway wouldn’t be tacked onto the roster until 1984 and 1988, respectively), albeit one with a similarly aspirational philosophy at its core.

“Here human achievements are celebrated through imagination, the wonders of enterprise, and concepts of a future that promises new and exciting benefits for all,” Walt Disney Productions CEO Card Walker read from the park’s bronze plaque during its official dedication in October 1982. “May EPCOT Center entertain, inform, and inspire, and above all may it instill a new sense of belief and pride in man's ability to shape a world that offers hope to people everywhere in the world.”

Epcot may not have transformed the landscape of urban planning and development in the way Walt imagined it would, but its dedication to technological innovation, conservation, and cultural education still makes it one of the most fascinating and multi-faceted parts of any Disney resort. Here are three things you may not know about the history of Disney’s sixth-most popular destination. 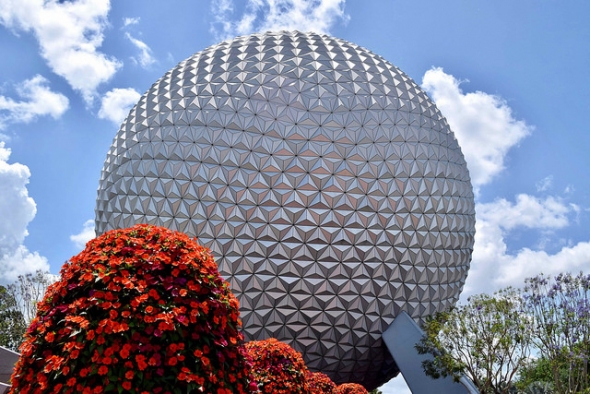 Long before “Thank the Phoenicians” became a Disney meme, long before riders could chart a hypothetical course for their own time-traveling avatars, long before Audio-Animatronics were used to illustrate the history of personal computers, Epcot’s signature attraction was placed in the hands of celebrated author, screenwriter, and personal friend to Walt, Ray Bradbury.

By the late 1970s, Bradbury was already well-renowned for his classic dystopian novel, Fahrenheit 451, as well as a plethora of sci-fi novels and short stories. Writing wasn’t the only area in which his talents and passions converged. He collaborated with Imagineers on an unrealized dream of a three-dimensional animation museum, consulted with architects on California plazas and shopping mall designs, suggested improvements for Disneyland Paris’ Orbitron, and helped flesh out the American Pavilion for the 1964-65 New York World’s Fair. In many respects, his vision for the future rivaled Walt’s in scope and ingenuity.

So, naturally, when Disney needed someone to take the reins on their newly-revised plans for Epcot, they turned to Bradbury. The result? A 14-page treatment of the attraction housed inside the gleaming silver geodesic dome designed by architect and futurist Buckminster Fuller.

From the tunnel, riders were soon ushered into a trifold story of past, present, and future. They witnessed the dinosaurs’ extinction and cavemen and women spearing and eating mammoths. They moved through the Stone Age and observed Phoenicians and Greeks debating ideas around carved clay tablets, then onto the Industrial Revolution, where steam-powered machines were king. The remaining influences on modern communication systems—Morse Code, radio transmission, television, and so on—were sandwiched into the next scene of the attraction, where Bradbury proposed the construction of an “abstract shape of criss-crossed, woven strands of wire … symbolically linking continents, countries, communities in remote and distant places.”

With their new, if brief understanding of the history of communication and technology, riders were sent into the “present,” a bustling urban scene where their natural senses were overwhelmed by a plethora of print media, a “computer wall” of blinking lights, and the fires of twenty rockets preparing their dramatic liftoff into outer space. In the final seconds of the attraction, riders floated above the Earth (well, were plunged into near-darkness along the track, anyway) for one last soliloquy from the “Universal Man” as he encouraged each individual to own their life, follow their dreams, and improve the world. The ride vehicles finally returned from the whirlwind journey to their unloading stations, thrusting their passengers headlong into the future… at least, what glimpses of the future were readily accessible within Epcot’s Future World.

Bradbury’s Spaceship Earth was perhaps a little too grandiose and philosophical in nature, but it helped form the basis of what soon became a classic Disney attraction. Instead of a cacophony of historical figures all jostling for attention, the ride’s first moments were spent in relative quiet and its long, dark ascent marked by just a few key moments of early history. Instead of dinosaurs faltering under a falling comet and cavemen digging into their dinners (though the latter is all but implied in the latest iteration of the ride), Audio-Animatronic actors pontificated within Grecian theaters, monks snoozed on their scrolls, and Johannes Gutenberg fiddled with his printing press. The narration, condensed and streamlined from “Universal Man’s” many speeches, was first recited by Lawrence Dobkin (1982 – 1988), then by Walter Cronkite (1986 – 1994), Jeremy Irons (1994 – 2007), and Dame Judi Dench (2008 – present).

Put simply: Spaceship Earth continued to evolve with the times, as it was always meant to do. “You’ve got to be moved by the history of mankind,” Bradbury told The Morning Call’s Geoff Gehman in 1999. And those who experienced Spaceship Earth were—and still are today.