Do You Remember These "Lost" Disney Parks Characters? Here Are Their Stories! 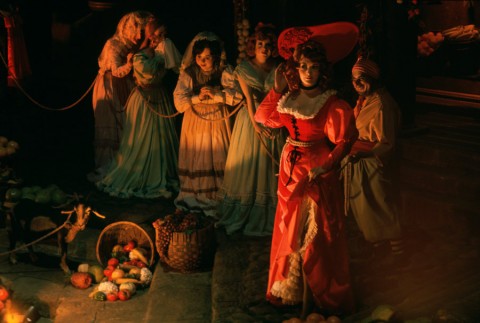 From day one, Disney Parks have been all about character. Whether from Disney's own film catalogue or from the minds of Imagineers, the characters brought to life at Disneyland and Walt Disney World become icons; central, memorable figures beloved by the generations who grow to "know" them year after year. From lovable classics like Peter Pan and the "Ghost Host" to new-age favorites like C-3PO and Albert, Disney characters have the unimaginable ability to join us on adventures and turn us into heroes.

That's why – just last year – we investigated the 10 Greatest Original Characters Created for Disney Parks. That got us to thinking – what about all of the characters that once inhabited Disneyland and Walt Disney World, but who've gone the way of the dodo at their respective resorts?

Take a look through these eight unforgettable characters who are "missing" from the parks, rides, and attractions they once inhabited. If you could bring one back, which would it be? Which one should stay lost? Share your thoughts in the comments below! For each entry, we also included a link to make a quick-jump to the epic Lost Legend features to learn the complete stories of each attraction.

With a mythos spread across entire galaxies, Star Wars has enough beloved characters to fill a stadium. That's why it's surprising – and in retrospect, brilliant – that none of them were selected to be the central character of the Lost Legend: STAR TOURS. This interstellar simulator starts as all long-distance air travel starts: in a monotonous, boring airport. Turns out that even in the epic world of Star Wars, most people have to travel by way of budget airlines. Our pilot is Captain RX-24 ("Rex") and wouldn't you know it? It's his first day on the job.

Obviously, what followed was a madcap race through space with Rex "still getting used to his programming," hurling our unsuspecting low-fare flight into a heroic encounter with the Empire's dreaded Death Star. Rex's quips and exclamations throughout become so engrained in fans, they live on even though the ride itself doesn't. 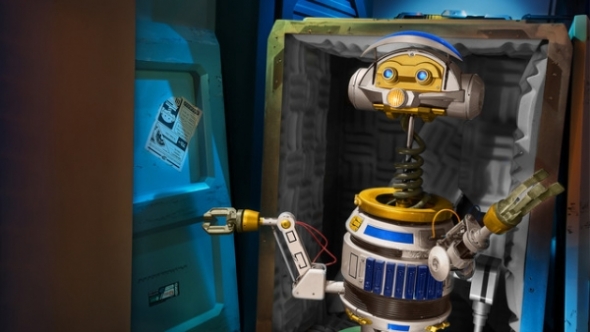 From 2011 to 2017, all four Star Tours attractions across the globe were upgraded to Star Tours: The Adventures Continue – an HD 3-D prequel with randomized sequences so the ride's rarely the same experience twice. Set before the timeline of the original Star Tours, "Rex" couldn't be the Captain. C-3PO takes his place via an in-cabin Audio Animatronics figure. Still, "Rex" can be seen in the queue's Droid Customs and baggage area as a broken Droid being shipped out for repair... stuttering his old recorded dialogue. 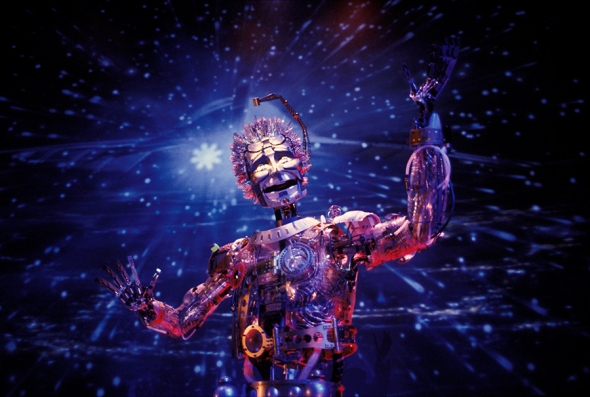 When Magic Kingdom's "New Tomorrowland" debuted in 1994, reaction among Disney fans was mixed. Imagineers had done away with the simple, geometric, "plain," Space Age Tomorrowland that had existed since the park's opening in 1971 and replaced it with something very different: a sci-fi spaceport of landed alien crafts, neon signs in extraterrestrial languages, and techno-infused, pop-art-deco architecture. In other words, Tomorrowland had abandoned the optimism and science of the real future in favor of a science fiction land that would never become outdated.

The first example of Tomorrowland shifting to fantasy was also the last gasp of an era before intellectual property invaded... This "New Tomorrowland" featured an overarching story connecting all of its rides, shows, and attractions in one narrative, truly making the land feel like a "real," habitable city of converging stories years before the Wizarding World model became the standard.

For example, right along the land's main entry was a Circle-Vision theater dating to the park's opening. But now, it would become the Tomorrowland Metropolis Science Center, currently showcasing its newest exhibition and subject of its own in-depth Lost Legend: The Timekeeper. Inside, The Timekeeper – a joyous, adventurous robot voiced by Robin Williams – would dispatch the lovable Nine-Eye back in time to record her surroundings via her nine eyes (projected on nine screens. Get it?). 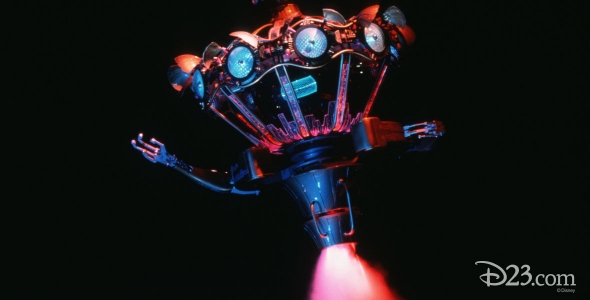 Very shortly after the opening of New Tomorrowland, Disney pivoted to the "intellectual property" based attraction model we know today, quickly sweeping across the land to undo their original stories and the land's larger continuity. The Timekeeper was one of the first to go, becoming Monsters Inc. Laugh Floor. Still, as the first ever Circle-Vision film to feature a plot (rather than just beautiful vistas of natural splendors), The Timekeeper was a smart, educational attraction anchored by an original character – something we don't expect to see in the U.S. Disney Parks for a long time. 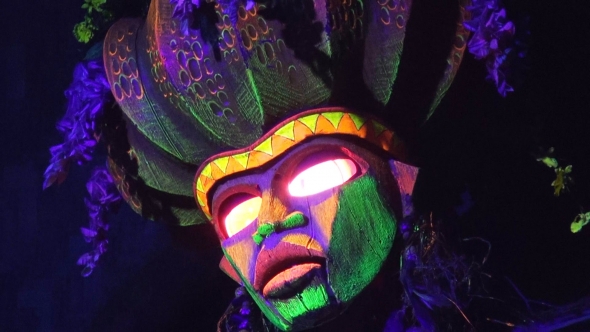 Since 1963, The Enchanted Tiki Room has been a certifiable Disney classic; one of only two attractions to be officially honored with "Walt Disney's" before its name. The tropical luau singalong is a favorite for generations upon generations who grew up in awe of the impossible place where "the birds sing words and the flowers croon."

But in the '90s, executives at Walt Disney World decided that the old-fashioned show just wasn't cutting it anymore. They saw an opportunity for synergy, and transformed Magic Kingdom's version of the attraction by inviting Iago from Aladdin and Zazu from The Lion King to take over. The new version of the attraction – seemingly brought to us by the mind behind Disney's worst '90s direct-to-video sequels – was self-referential and obnoxious, built around the premise that if the original "bird brain" cast wanted to make it in Hollywood, they needed to "get hip." To do so, any attempts to sing the classics was overruled with spoofs of songs from Aladdin and the Merrymen's "Feeling Hot Hot Hot."

Perhaps the only memorable character from the show was Uh-Oa, the goddess of disaster who would arise from the central pedestal, sing a C-grade song, then fry Iago to a crisp. We dissected the whole experience in a standalone feature, Declassified Disaster: Enchanted Tiki Room – Under New Management. You've got to read it to believe it. 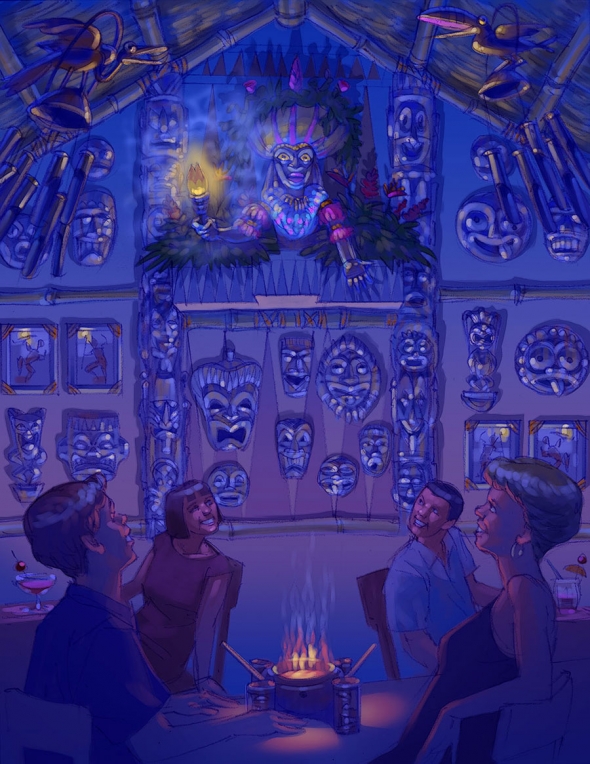 The sad part is that for a generation of Walt Disney World guests, the Under New Management show is the Enchanted Tiki Room, and Millennials who grew up with the animated birds presiding over the attraction find the Walt Disney original boring and slow. (Think of it as Stockholm Syndrome.) For them, Uh-Oa was relocated to Trader Sam's Grog Grotto, the much-loved S.E.A.-influenced bar at Disney's Polynesian Village Resort. Order the flaming drink named for her and the bartenders start a chant of her name, waking up the ancient goddess once more. 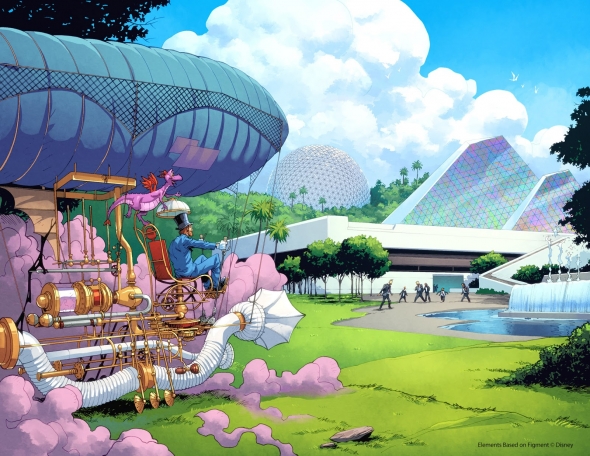 Though Theme Park Tourist's Legend Library is made of dozens and dozens of entries, our second ever in-depth feature was a look at the fan-favorite Lost Legend: Journey into Imagination. So beloved was this EPCOT Center original, it's forever engrained in the hearts and minds of a generation. A huge part of its evergreen appeal is its duo of original characters: Dreamfinder (a red-bearded, enigmatic inventor) and Figment (his creation: a purple dragon).

Together, the duo whisks guests through realms of Literature, Art, Performing Arts, and Science in an ambitious and elaborate dark ride through the process of creation. Equally as iconic was the ride's song – "One Little Spark" – created by Disney's go-to composers, the Sherman Brothers (who also wrote "The Tiki Tiki Tiki Room," "There's a Great, Big, Beautiful Tomorrow," "Supercalifragilisticexpialidocious," and many, many more Disney Parks standards.) 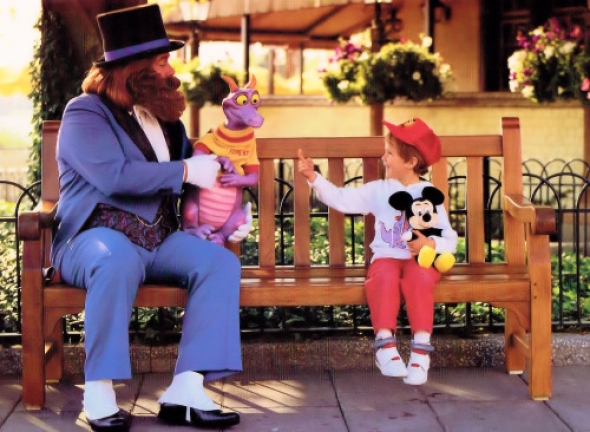 In what must be one of Disney's most regrettable decisions ever, the attraction was stripped in preparation for the New Millennium, re-opening as one of the worst rides to ever stand at Walt Disney World – subject of our Declassified Disaster: Journey into YOUR Imagination feature. Neither Dreamfinder nor Figment made an appearance on the new version of the ride, which also omitted "One Little Spark" and transformed the ride from an etheral trip through imagination into a sensory funhouse laboratory.

Journey into YOUR Imagination mercifully closed after only two years, re-opening shortly after as Journey Into Imagination with Figment, maintaining the sensory funhouse / laboratory style, but awkwardly inserting the purple dragon throughout. Even two decades gone, though, Dreamfinder and Figment are de facto icons of Epcot, even for a generation who never saw them in their own attraction as intended.