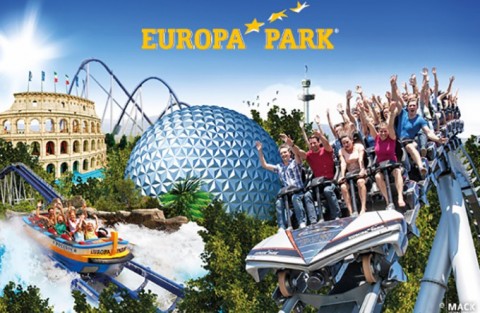 Ah, the roller coaster capital of the world. Many theme parks boast in grandiose terms about their thrill rides. They claim that they have the most intense steel and wooden roller coasters ever built. Only one theme park can tell the truth about their claim. By definition, there’s only one place that’s home to the best coaster collection on the planet. Which one is it? Here’s your guide to which park claims roller coaster supremacy over the competition. 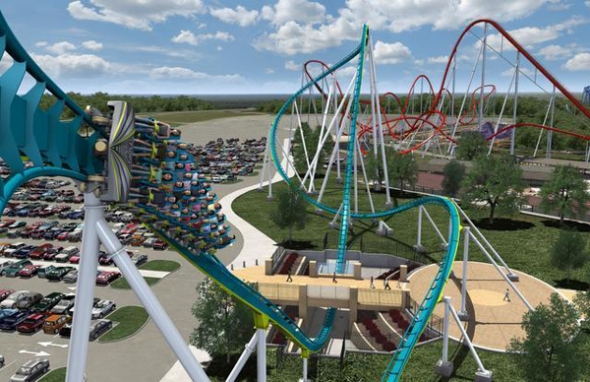 This list is entirely subjective, as it requires an impossible judgment of quality vs. quantity. Some unlisted parks have as many roller coasters as others I'll mention, and a few have at least one superior roller coaster. Parks need a considerable number of high-caliber thrill rides to earn a spot here.

Carowinds qualifies for two reasons. The first is quantity, as it will open its 14th roller coaster in 2019. It’ll have the fourth-most number of coasters in the world at that point. But the park’s true justification for this list is the Intimidator, a towering hypercoaster that stretches 232 feet into the air and then drops guests 75 miles per hour at a 74-degree angle. Named and styled after the original Intimidator, NASCAR’s Dale Earnhardt, it’s a monstrous coaster in tone and spirit.

The recent calling card at Carowinds is a different coaster, though. Fury 325 is a screaming steel coaster so blisteringly fast that it's sometimes hard to keep operational. At a top speed of 95 miles per hour, it's absolutely in the conversation for best thrill ride for adrenaline junkies out of everything on this list. 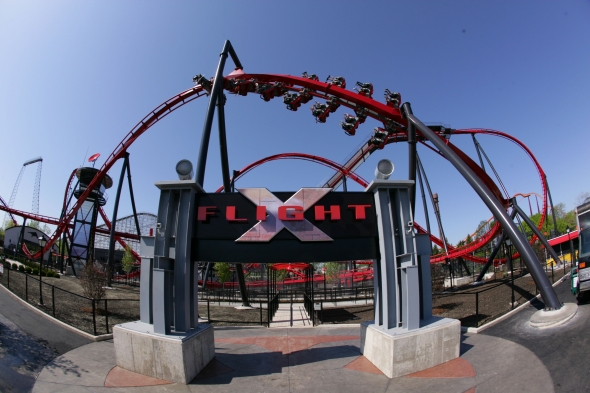 The town of Gurnee, Illinois, may not seem like a destination vacation location. Theme park tourists know that the town harbors a secret, though. This place is home to as many as 16 roller coasters, depending on your criteria. The alpha is Goliath, a wooden coaster that broke records for velocity, drop, and drop angle when it opened. It’s perennially ranked as one of the best wooden roller coasters in the world. In addition, the park has one of the few winged coasters in existence, and one of the free spin coaster clones, The Joker, too.

Only two international parks can rightfully claim that they’re in the conversation for roller coaster capital of the world. Ferrari World Abu Dhabi would like to join them, but it’s a one-trick pony with Formula Rossa, the fastest ride on the planet.

Europa Park, the largest theme park in Germany, doesn’t have anything quite so showy, but its 13 roller coasters are admirably consistent in quality. This family-owned park is Disney-like in their emphasis on theming. Even their roller coasters like ARTHUR and Eurosat – CanCan Coaster have dark ride elements. In fact, the latter ride is the closest thing to Spaceship Earth in the world, at least outside of Epcot. This park blurs the lines between adrenaline and immersion. 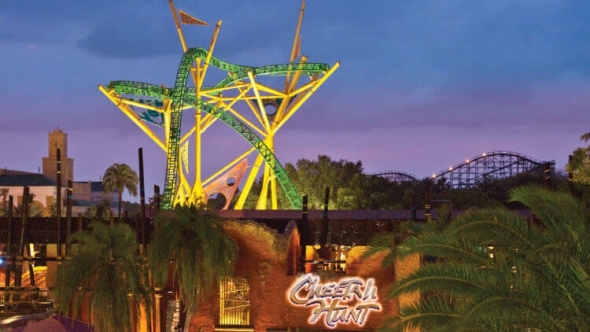 For all of the negative press that SeaWorld receives, its ownership gets one thing very right. Their management of Busch Gardens Tampa is superlative. Roller coasters are a perfect example. The park “only” operates eight of them, but the quality of its top five rivals anything on this list.

Kumba is a quarter-century old yet its top speed of 60 miles per hour combined with its seven inversions keep it relevant today. SheiKra is a dive coaster that was voted one of the top new attractions of 2014. The aptly named Cheetah Hunt mimics the animal that bears its name with massive velocity and four G’s of force. Cobra’s Curse is a dizzying spinning coaster with delightful, colorful theming. And Montu stood as the best inverted roller coaster on the planet for many years. If this park had four or five more coasters, it’d been in the conversation for best in the world. Get cracking, SeaWorld executives! 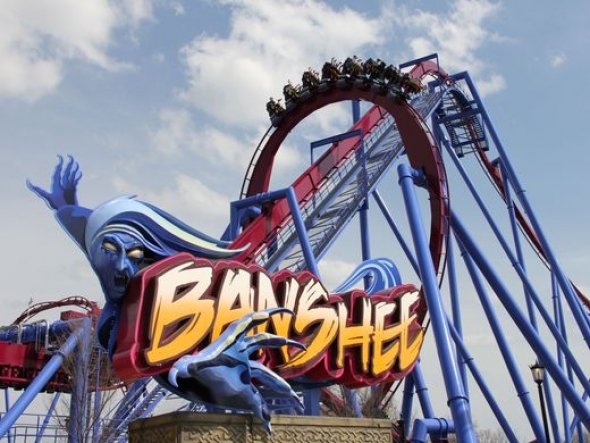 Mason, Ohio, has roughly the same population as Gurnee, which means it shouldn’t be on the shortlist for roller coaster capital of the world, either. It has serious coaster credentials, though. The Racer became world-famous after an appearance on – don’t laugh – The Brady Bunch. In recent years, two coasters have garnered headlines. Diamondback goes 80 miles per hour (MPH) but ends with a splashdown!

Banshee is even more interesting. It stands in the space formerly occupied by the legendary Beast and Son of Beast. When park officials tore down the latter attraction due to safety concerns, they knew they had to replace it with something spectacular. They came up with the longest inverted coaster in the world, one capable of 68 MPH and with seven inversions! Don’t overlook Kings Island. This sleepy little town just outside of Cincinnati has some shockingly good offerings. 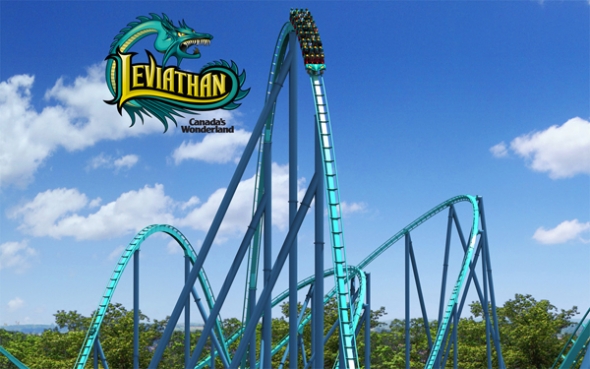 I'm never quite sure what to do with the seasonal Canada's Wonderland, the other international theme park with excellent roller coasters. Our neighbors to the north have built a whopping 17 roller coasters, making it top three in the world in quantity. The rides are incredibly innovative, too.

Perhaps the strangest attraction mentioned here is Wonder Mountain’s Garden, a kind of gamified dark ride, except that it’s also a roller coaster. You start outside on a conventional steel coaster but then…go inside and battle a dragon? Yeah, it’s weird.

Conventional coaster fans gravitate toward Leviathan, the gigacoaster that peaks at 93.3 MPH and dives 80 degrees at one point. It’s also one of the longest steel coasters in the world at 5,486 square feet. Leviathan’s been ranked as one of the top eight coasters for five straight years. It’d be a lot more famous if the park were open year-round and had more awareness in the United States. 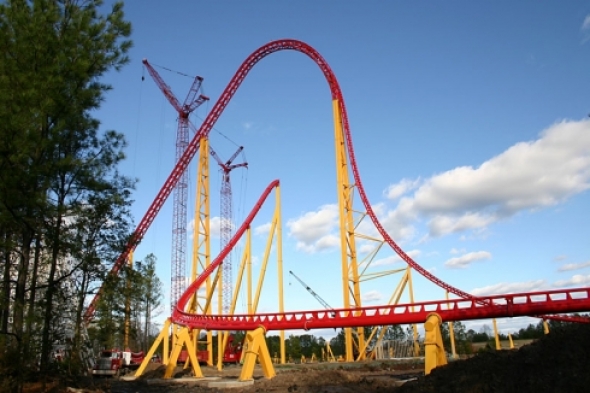 The same company owns Carowinds and Kings Dominion. I say this because I’m about to confuse you. I previously mentioned that Carowinds has a Dale Earnhardt-inspired roller coaster. Well, Kings Dominion does as well. Theirs is a more advanced version of the same concept. Intimidator is a gigacoaster that soars 305 feet into the sky (thus the name). The increased elevation leads to higher velocity, too. Intimidator 305 maxes out at 90 MPH, the kind of speed that will get your license revoked on the interstate. Oh, and Dominator is pretty good, too.

Thanks for bringing the incorrect pictures to my attention.

Also, not that you're wrong on a subjective list, but X2 is much more unique and defining as a single experience (being the only ride of its type on the continent) than any of the Cedar Point rides are by themselves. Neither of those parks is my favorite, but it seems an odd reason to give Cedar Point the nod over Magic Mountain.