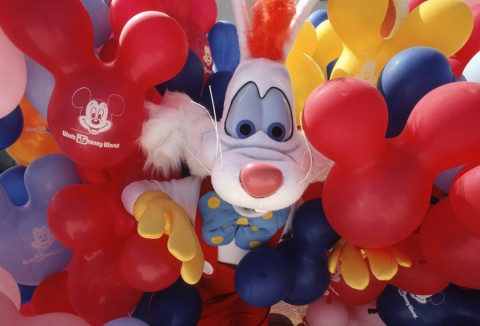 The 1980s were a grim time for Walt Disney Studios. Their animation division had collapsed into disarray, while most of their box office hits were modest ones. Unless you lived through the era, you’re unlikely to know the biggest blockbuster Disney movie released during the decade. Who Framed Roger Rabbit was the tenth largest box office hit of the 1980s but has since largely vanished from Disney parks save for one significant exception. Let’s go behind the ride to learn about Roger Rabbit’s Car Toon Spin.

The trick: overcoming Hollywood power struggles to build a ride

Image: DisneyRemember a few years ago when the Frozen craze swept over Disney theme parks? Elsa and Anna were ubiquitous for a time, particularly at Epcot, where Imagineers altered the Norway Pavilion to highlight the fictional land of Arendelle over the actual country of Norway.

Older Disney fans understand that this was far from a first at the parks. Perhaps the most interesting phase was the brief period from 1988 through 1991 when Disney went all-in on the biggest recent blockbuster of the era, Who Framed Roger Rabbit? The quirky comedy married traditional cartoon concepts with the real world, leading to oddities such as an anthropomorphic rabbit interacting with Eddie Valiant, a hard-boiled detective.

The 1970s and 1980s were the low point in the history of Disney animation. They struggled mightily to create memorable movies worthy of the Disney legacy. Who Framed Roger Rabbit signified the company’s desperation, as they purchased the rights to an unpublished novel, Who Censored Roger Rabbit? Then, Michael Eisner crafted a unique arrangement with one of his Hollywood pals, Stephen Spielberg. 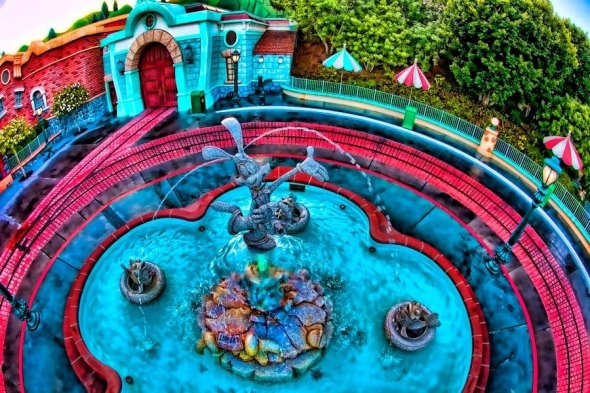 Image: DisneyThe famed director and his team at Amblin Entertainment agreed to work on the project in exchange for a large degree of creative control. This contractual concession explains why Roger Rabbit enjoys only a minimal presence at Disney parks today. After the success of the film, Eisner tried to push Roger Rabbit animated shorts with upcoming Disney movies, much to the frustration of Spielberg.

The auteur rightfully believed that he should have some say in the appearance of the character in films, one of which probably should have been a Spielberg production. Since the Amblin team had veto rights in the licensing of Roger Rabbit merchandise, the rift led to promotional issues. Spielberg stopped authorized Roger Rabbit products, preventing Disney from using them.

As the break-up occurred, Disney canceled its massive plans for the character of Roger Rabbit. They’d originally wanted to construct an entire themed land around Toon Town. Their chosen locale was their newest park, Disney’s Hollywood Studios. As you know, this park never even got a Roger Rabbit attraction. That’s how much the Eisner/Spielberg split impacted the character’s fate. 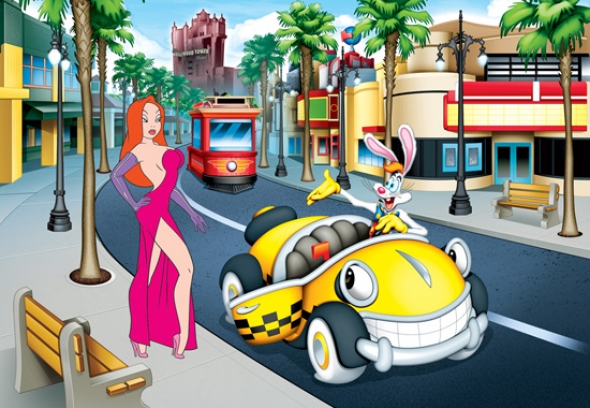 Image: DisneyFor a brief period of time, roughly three years, Roger Rabbit was omnipresent at Disney theme parks. Just as quickly, he vanished. Park officials even introduced their own knock-off character, Bonkers D. Bobcat as a way to keep the premise alive. Disney wholly owned their imitation bobcat and would have happily used it in parks as a replacement had consumers liked it even a little bit. Alas, they preferred the real deal, Roger Rabbit, to its cheap clone.

In the wake of all this Hollywood ego-stroking nonsense, Disney moved forward with one version of a Roger Rabbit attraction. The lone surviving concept from Roger Rabbit’s Hollywood, a themed land that never got built, was something called Benny the Cab. Amusingly, Benny didn’t wind up as an integral part of the ride named after him. Disney would ultimately substitute his previously unknown cousin, Lenny. Roger Rabbit’s Car Toon Spin suffered a seemingly endless series of concessions prior to its construction. Somehow, it’s wonderful anyway.