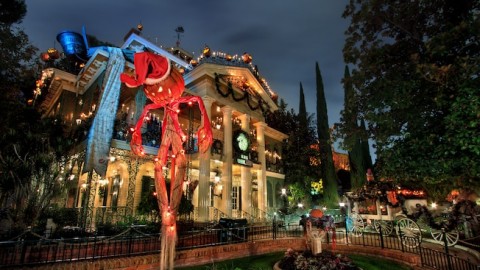 Over the years, Disney theme park operators have embraced the holidays. They’ve introduced special holiday enhancements that alter the identity of some of your favorite attractions, at least temporarily. In recent years, park strategists have really ramped up the strategy, adding these overlays in record numbers…but which ones are best? Here are the best holiday overlays at Disney theme parks.

This particular overlay is the purest version of the ride premise. Outer space is an empty void, a pitch black environment that’s freezing cold to boot. During Mickey’s Not-So-Scary Halloween Party, Imagineers turn out the lights on Space Mountain, which is already one of the darkest indoor rides in the world. In a pitch black environment, you’ll feel more attuned to every bump and bounce along the way, which isn’t always a positive.

I love this overlay, but I felt like I needed to visit a chiropractor the last time I rode it. I’ve never experienced Ghost Galaxy at Disneyland, so I couldn’t rank it. In watching the videos, it seems better, though.

This list has a clear divide. Some of the overlays are extremely detailed and worthy of a lot of analysis. Two of the entries are much lazier. Mad Tea Party also transforms during Mickey’s Not-So-Scary Halloween Party. It receives special lighting effects that give the attraction a kind of green glow, almost as if it had suffered gamma radiation exposure and was about to Hulk out.

These modest changes aren’t much in theory. However, I spent more than an hour waiting in line at a Winnie the Pooh character greeting during one of these parties. I must admit that the odd illumination caught my attention several times. Riding Mad Tea Party with this overlay is even trippier than normal. The green haze is equal parts distracting and disconcerting…unless you’re stoned.