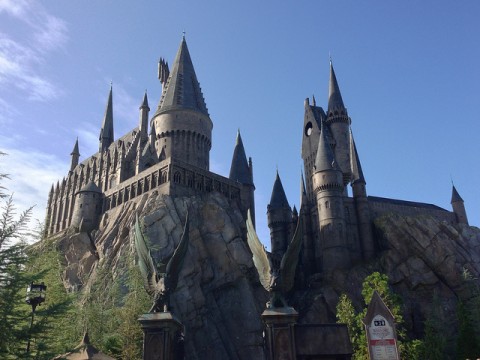 A long, long time ago—all the way back in 2006—the world as we knew it was fully caught up in Harry Potter mania. The sixth installment of the series, Harry Potter and the Half-Blood Prince, had just been released the year prior, while fans of the film adaptations were eagerly anticipating a 2007 movie release date for Harry Potter and the Order of the Phoenix. Series creator J.K. Rowling, meanwhile, was in negotiations with Disney to bring Harry Potter and his ilk to the Happiest Place on Earth.

According to theme park insider Jim Hill, Rowling signed a letter of intent with the company as they began preliminary negotiations to convert a small parcel of Fantasyland into a handful of wizarding world-themed attractions. These super-secret plans were never realized, as Rowling later struck up an immensely-successful partnership with Universal Studios, but Hill recently revealed that Disney’s ideas had been… small in scope and vision, to say the least:

“This was tiny,” Hill said. “Itty bitty. There were two attractions. Basically it was going to be Buzz Lightyear. You were going to be in an Omnimover attraction with a wand instead of a gun, and you were moving through basically a Dark Arts teaching class. The other aspect was going to be a Care of Magical Creatures Petting Zoo.”

In other words, what Disney had envisioned paled in comparison to the immersive and multi-faceted world Universal Studios created for Rowling and her characters in 2010. The Wizarding World of Harry Potter not only did justice to an incredibly popular and heartily-defended franchise, but it raised the stakes for theme parks around the world. It wasn’t enough to create beautiful landscapes and innovative attractions and high-quality tech anymore—guests wanted to step through the turnstiles and feel utterly transported to another reality.

But let’s turn back the clock for a (hypothetical) moment and imagine that Universal Studios never developed the Wizarding World. What could Disney have done to improve on the two meager attractions it originally proposed? Could they have stopped Rowling from walking away from the project entirely… and just how would they have managed to pull that off? Let’s take a look.

Attraction #1: A one-on-one battle against Voldemort 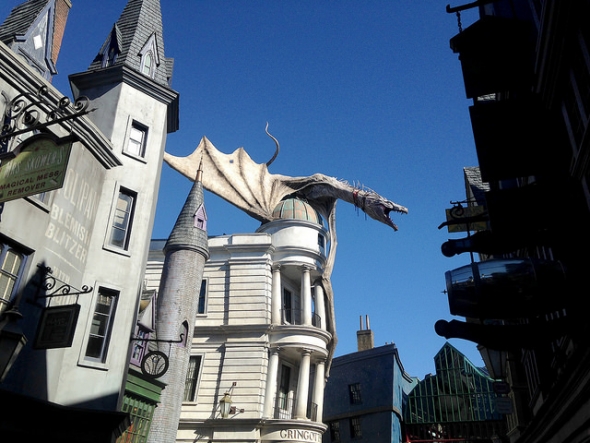 If you grew up with Harry Potter, chances are you also harbored a secret hope that one day, an invitation to Hogwarts would come fluttering down your chimney by owl post. While it might have been impractical for Disney to replace Cinderella Castle with Hogwarts and make those dreams come true, that’s not to say Disney couldn’t have found a way to bring the Wizarding World to life on a smaller scale.

Since the 1980s, if not earlier, the Disney Parks have played host to several interactive experiences geared toward their younger demographic. A seasonal show themed to The Sword in the Stone debuted alongside Disneyland’s newly-refurbished Fantasyland in 1983, where children were invited to try their hand at pulling Arthur’s sword out of the stone in front of King Arthur Carrousel. Adult participants were frequently selected and always failed the task, while the magic touch was bestowed on whatever child was “destined” to become Fantasyland’s temporary ruler (their reign—in title only—was often limited to just a few hours on days when multiple shows were scheduled).

Nearly 25 years later, the Jedi Training Academy was incorporated at Disneyland’s Tomorrowland Terrace and, later, in Disney’s Hollywood Studios, Disneyland Paris, and Hong Kong Disneyland as well. In its various iterations, the training sessions allow 16+ children to study under a Jedi master and his apprentice, the latter of whom is struggling to conquer her fear of the Dark Side. The experience isn’t particularly personalized to each individual padawan, but still gives kids the opportunity to don their own Jedi robes, wield their own lightsabers, and participate in a one-on-one battle with an iconic Star Wars villain.

It’s not difficult to imagine how Disney might have incorporated a similar Harry Potter experience in their parks. Instead of zapping Darth Vader with a lightsaber, kids could have practiced spells (think “Expelliarmus,” not “Avada Kedavra”) with their own wands before beating back dementors and Death Eaters… or perhaps even Voldemort himself. And, just as the Jedi younglings learned at the Temple, the young witches and wizards might have gotten the opportunity to not only step into Harry Potter’s shoes and test their mettle against dark magic, but come together as a group to learn the value of standing together in the face of fear. In other words, it would’ve looked a little something like an invasion of Dumbledore’s Army in Fantasyland—not entirely in keeping with either Rowling’s fantasy universe or the Disney brand, but undeniably captivating for younger guests and the young-at-heart alike.