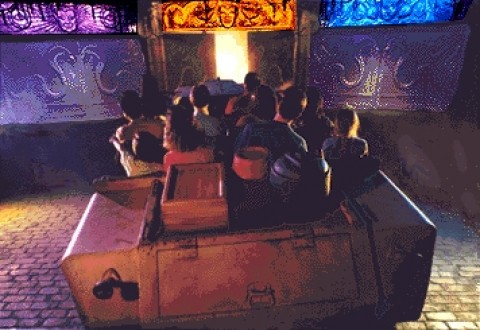 Since the earliest days of Disneyland, Walt and his designers set out to wow guests by making the unimaginable real. From singing birds to zooming through the stars; haunted ballrooms to the depths of the jungle, Disney Parks are all about dazzling guests with inexplicable effects. That's why we took an in-depth look at 10 "How'd They Do That?" Special Effects that STILL Amaze Us to celebrate how Imagineering's tricks – from simple to astounding – make all the difference.

But for fans of Imagineering, there's only one thing more interesting than a special effect that works: a special effect that doesn't. So today, we've created a special list to explore a "lucky" 13 special effects that just didn't work. Broken, malfunctioning, abandoned, or removed, these almost-amazing moments simply didn't work out the way designers had hoped... And since Disney's designers tend to have smart solutions, you may not have even noticed when these effects simply disappeared, were replaced, or were left broken in plain sight! 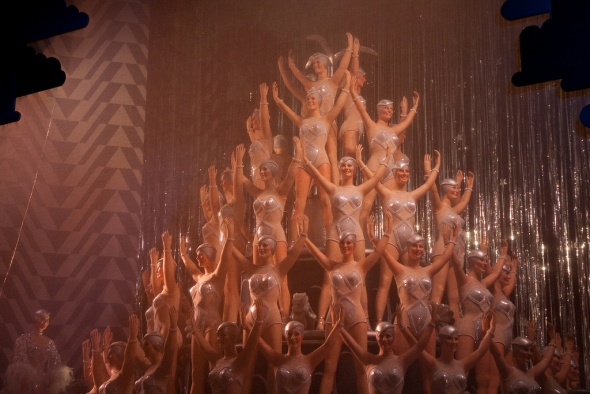 Located in the iconic Chinese Theater at the end of the Disney-MGM Studios' Hollywood Blvd., the Lost Legend: The Great Movie Ride had all the makings of a timeless masterpiece as only Disney can create. The slow-moving dark ride through the greatest moments of (licensing accessible) Hollywood hits was an epic, 22-minute journey into the movies from the Golden Age to today. However, one of the ride's biggest scenes never really worked as intended.

In the first scene, guests would pass through a medley of early movie musicals, all centered around the "By a Waterfall" scene from Busby Berkley's 1933 film Footlight Parade. Recreating the film's famous "human waterfall" was a five tier "cake" of posed synchronized swimmers, each tier rotating counter to the last as fountains lept from each level to the one below, just as in the famous scene. You can see the short-lived effect in action here. However, the heavy rotating mechanism is said to have been a pretty awful pain to keep running, and the addition of water allegedly caused quite a headache, occasionally flooding the ride path and frazzling sensors.

THE FIX: By the park's first anniversary, the rotation and the water were halted. Soon after, a hazy scrim was placed between riders and the scene (as you can see here), with kinetic lighting replacing actual movement... which won't be the last time on our list that Disney trades lights for action.

2. The Chamber of Destiny 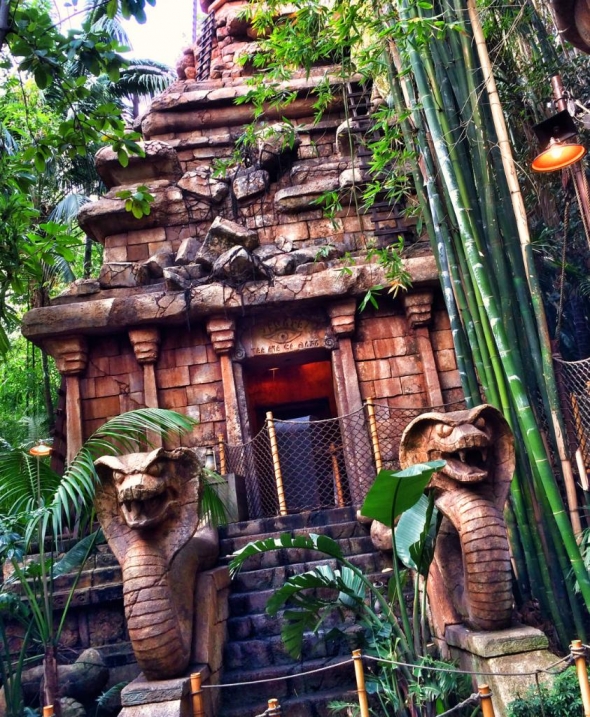 The Modern Marvel: Indiana Jones Adventure isn't just one of Disneyland's anchor attractions; it's one of the most spectacular rides Disney has ever designed. The attraction's lead-up tells the story of the ancient lost god Mara, said to grant any who came to his temple one of three supernatural gifts: timeless youth, earthly riches, or visions of the future. In fact, legend says that in the heart of the temple, the ancient Chamber of Destiny presents three locked doors, each corresponding to one of Mara's gifts, and each leading to a legendary "Hall of Promise" beyond which visitors recieve their reward... if they can avoid looking into the dark eyes of the ancient god, that is... 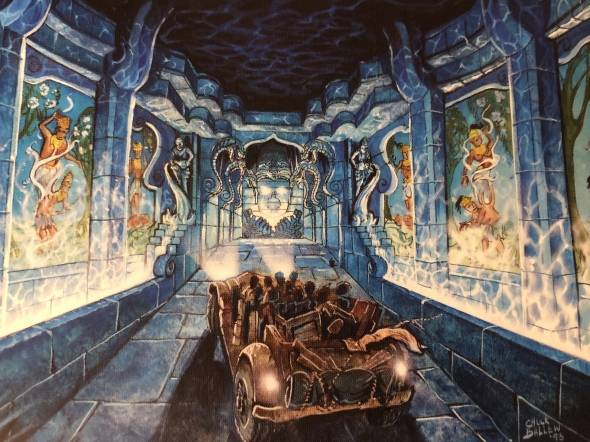 With the rising action out of the way, the ride's literary climax actually happens in its first scene, when riders turn the corner from the load area and face those three locked doors of legend...

Each time that guests boarded the rumbling Troop Transports, they appeared to pass through a different door. On your first ride, you may enter the middle door – earthly riches; your second ride may pass through the left door – visions of the future; then, the right door – eternal youth. And beyond the door, each "Hall of Promise" would be filled with props, paintings, frescos, and statues appropriate to the door selected for you.

Of course, it was all just a masterful illusion. In reality, the "Chamber of Destiny" has just one functioning doorway, with two false doors on either side of it. The large, funnel-shaped chamber would simply pivot to make it appear that the single functioning door was on the left, right, or middle. The one actual door opens to a single Hall of Promise, with split-second changes in lighting, sound, projection, and scrims swapping the Hall of Promise to match the "Gift" Mara selected. (The effect is best understood by seeing it in action on the security monitor here or a behind-the-scenes video here.)

But about a decade ago, the Chamber of Destiny stopped pivoting. Rumors insist that an earthquake (common in Southern California) fatally damaged the mechanical system that controlled the enormous moving set.

THE FIX: To compensate, Disney turned to a 21st century favorite: projection mapping. Now, the three doors are brought to life by projections that can "shuffle" the order of the doors and have clever unlocking animations matching each gift. Unfortunately, guests now always pass through the middle door (even if which gift the middle door leads to appears to change via projection). That at least allows the ride's re-rideability to continue, but firmly squashes any illusion that you're actually passing into a different room or taking a different route. Fans still hope for the return of the effect, and it's true that a working Chamber of Destiny plus the projections would make for a truly awe-inspiring intro.

3. The Knight of the Living Dead 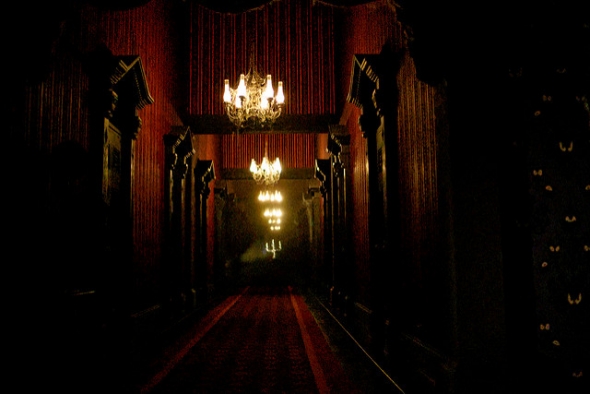 It's often said that the Haunted Mansion is home to "999 Happy Haunts." And despite the ride's atmospheric introduction and its eerie, abstract first half, eventually, even the most frightened children tend to relax by time "Grim, Grinning Ghosts" come out to socialize. The Mansion's unique fusion of frights and fun is now seen as one of its greatest strengths, but in the 1980s, designers and executives briefly toyed with the idea that the ride might be getting stale and predictable. 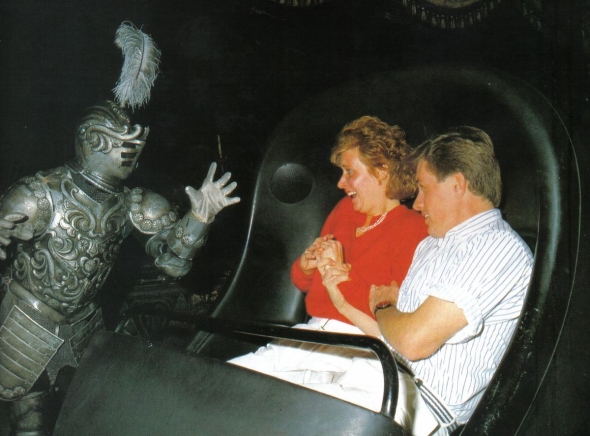 Since most classic haunted house dark rides featured shocking "jump scares" (commonly, rattling chains, "falling" bookcases, sudden loud noises, or the classic car horn startle), in 1985 Disney tested out a new effect that – it was hoped – would add some legitimate tension and unease to the manor. Standing near the "Endless Hallway" scene (where other suits of armor are positioned), the so-called "Knight of the Living Dead" was played by a real actor, who would literally sneak up to vehicles to ellicit screams.

THE FIX: Apparently, the presence of the figure did more harm than good. The "Knight" would frequently catch guests in... well... unsavory situations. Plus, as the Omnimovers would rotate toward the hallway, the Knight suddenly leaning into the vehicle to frighten riders would frequently become the target of a quick "fight or flight" punch to the head, or a flying purse. Insiders say that each actor playing the knight was eventually armed with his own ride-stop button to slow the Omnimover chain to return thrown personal items. Altogether, it turned out that guests wanted the Haunted Mansion to be predictable and family-friendly, and injecting actual fear into the ride simply didn't jive.