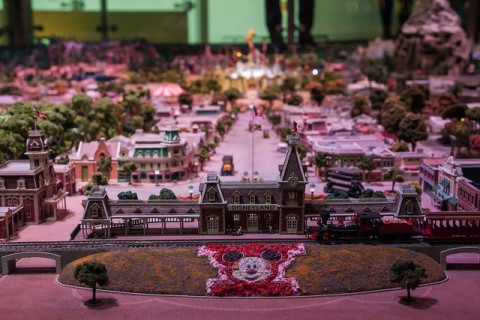 It’s a familiar story, one that starts with Walt Disney sitting on a painted green bench on the perimeter of Griffith Park Carousel in Los Angeles, California. He’s there most Sundays, watching his two daughters, Sharon and Diane, spin around the horses. There should be a place, Walt thinks, where the parents and children could have fun together.

That’s where the story appears to end. Some stuff happens in the middle—Walt dreams up a clean, safe, streamlined park full of attractions the likes of which had never been seen—and presto! Disneyland is born.

But Griffith Park alone wasn’t enough to set the gears in motion. In the decades leading up to Disneyland’s auspicious opening, Walt dug into the theme park industry with the kind of meticulous attention to detail that he had so often applied to his animated features, the kind of detail that was missing from many traditional amusement parks littered throughout the country. He assembled a team of artists, engineers, architects—even other theme park owners—and together they traversed multiple states and countries on a quest to glean everything from crowd patterns to ride prices and the habits of guests who had been pegged as petty thieves among unguarded pockets and gift shops. Whenever he could, Walt made personal visits to the parks himself, and spent hours observing the ebb and flow of the parkgoers and picking the brains of his industry peers.

Of the myriad gardens, railroads, amusement parks, and state fairs that piqued Walt’s curiosity, five places stood out as clear inspiration for the expanse of Anaheim-grown orange groves that would later be transformed into the sprawling landscape of Disneyland itself… 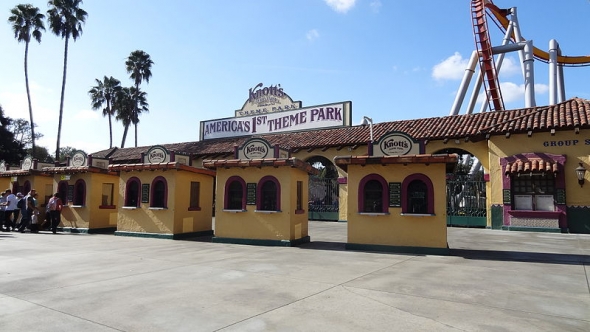 Before Walt established his park as one of Knott’s Berry Farm’s fiercest local competitors, he was drawn to it for inspiration. Entrepreneur and berry farmer Walter Knott began setting up informal attractions on his property in 1940—15 years before the advent of Disneyland—and developed his own personal “county fairgrounds” in the decade that followed.

Following Walt’s first visit to the Buena Park amusement area in the mid-1940s, he shared his initial vision for Disneyland (then referred to as “Mickey Mouse Park”) with some of his trusted employees. He pictured an old-fashioned town square for adults to relax while their kids ran around, the precursor to today’s Town Square and Main Street, U.S.A. It would feature a drugstore, fire station, opera house, movie theatre, and steam train… a perfect replica of a turn-of-the-century Midwest town, the likes of which Walt himself had experienced as a child. He even had the idea to populate the town with “characters,” which was in part inspired by a similar feature over at Knott’s Berry Farm. Unlike Knott’s, though, Walt stressed that he wanted to offer guests more than just swings, slides, and pony rides. His theme park would remind people of their American heritage and the events and peoples that shaped the country’s history.

In 1997, long after Disneyland and Knott’s Berry Farm had established themselves as premier tourist locations in Southern California, the Knott family started hunting around for a buyer to take the amusement park off their hands. One option? The Walt Disney Company, who could have converted the park to their second California-based location as Disney’s California Adventure was still under construction.

Had the sale gone through, Knott’s Berry Farm would have undergone a full-scale makeover as Disney’s America, a historical theme park designed to illuminate different eras of American history. Proposed plans for the re-theming included nine lands called Native America (1600-1810), Presidents’ Square (1750-1800), Crossroads U.S.A. (1800-1850), Enterprise (1870-1930), We The People (1870-1930), Civil War Fort (1850-1870), Family Farm (1930-1945), State Fair (1930-1945), and Victory Field (1930-1945), with attractions spanning the Audio Animatronic-heavy Hall of Presidents to a river rafting attraction called The Lewis and Clark Expedition and a scaled-down replica of the Ellis Island immigration station. Plans for the park eventually fell through, however, as the Knott family raised strong objections to the retheming of the existing park and transportation options connecting Disneyland to Knott’s proved too expensive.