What Are the Best Water Rides in North America? 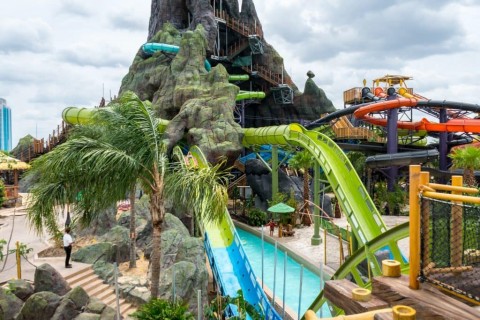 Splish splash, you were taking a bath, riding down your favorite waterslide. Yes, the joy of a water park is unlike any other type of amusement park in the world. You climb up a hill or stairs, knowing that when you reach the top, you’ll come zooming back down again. The only difference is that you’ll be riding a wave of water, heading toward a satisfying splash at the bottom. Each year, water parks are building newer, better slides, too. Here are the best eight water rides in North America!

You didn’t think I’d mention Splish Splash without discussing the water park that bears the same name, did you? This park was a hidden gem for years before a movie called Adventureland boosted the reputation of both that park and the owners’ water park, Splish Splash.

While the movie is a nostalgic celebration of the low-budget nature of the park, Bootleggers Run is the most modern of water coasters. Almost 1,000 feet long, this ride track operates on hydromagnetic technology, which powers the four-person raft uphill. It reaches a height of almost five stories before descending at a sharp 45-degree angle.

Florida is the unofficial water park capital of the southeast, rivaled only by the Wisconsin Dells across all of North America. Adventure Island Tampa doesn’t get the hype of some of its more storied counterparts, but it has one of the most thrilling rides nonetheless. Colossal Curl is a glorious tubed water coaster that carries four passengers through some oddly colored tubes. It’s a disorienting trip that delivers a lot more splashes to the face than your average raft ride. Colossal Curl is kind of mean, and I say that as a compliment.

Many of the most exhilarating water park attractions aren’t for the faint of heart. Fortune favors the bold on these rides. Dive Bomber is at the top of the list, as it requires a kind of bravery that few possess. You’ll feel your heart in your throat as you prepare your descent on Dive Bomber. It’s a nightmare disguised as entertainment. You’re standing in place when the ground disappears beneath you, hurtling you down the slide at maximum velocity. And you’re reaching the bottom whether you want that or not. This kind of ride isn’t for everyone, but it’s immensely satisfying for the daring kind.

When Volcano Bay debuted, it had its fair share of problems. Some of the negative headlines obscured the fact that the new water park had a hit on its hands. Krakatau Aqua Coaster claims a rare blend of theming and visual stimulation.

Theoretically, guests take a quick detour through an active volcano. This wienie is the centerpiece of Volcano Bay and a spectacle that even Disney Imagineers gaze upon with envy. The ride through this structure is unique by water coaster standards. Universal has designed it as part of a full construction, which means the views are much different than the open air ones you’ll see at most water parks, which are otherwise sparely decorated. The waterfall here is a memorable highlight in a truly spectacular ride.

Yes, the Bahamas are a part of North America, even if you don’t think of them that way. And one of the many beloved tourist destinations here is Atlantis Paradise Island. Here, you’ll discover a 154-acre waterpark featuring another of those daredevil drop rides. Leap of Faith is slightly different from Dive Bomber, though. Sure, the sudden zero-gravity plunge is similar.

The difference is the scenery. You’re riding down a memorable setting, a Mayan pyramid that ancient architects designed with a nine-story waterslide for some reason. Don’t overthink it. Simply embrace the rush of the drop. Also, try to have a loved one record your descent. It’s a social media showstopper.