Disney puts their own spin on the dark ride 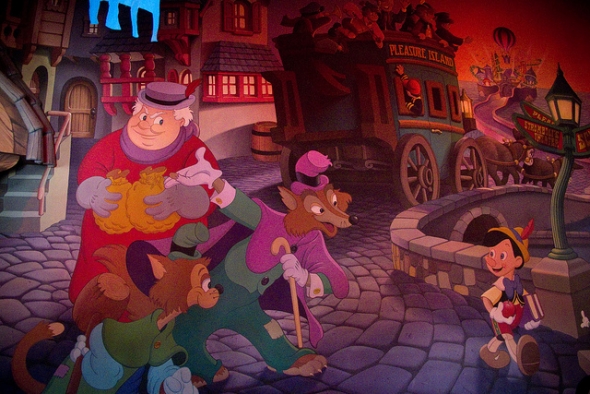 In the 16 years it took to imagine, plan, and develop Walt Disney’s first theme park, his team of engineers started to consider how they might integrate the pretzel ride system that had swept through other amusement and theme parks in the early decades of the 20th century. According to Imagineer Claude Coats, they ultimately decided to use it as a vehicle to immerse guests in the company’s animated films, from Walt’s first feature-length picture, Snow White and the Seven Dwarfs, to the short film The Wind in the Willows. Together with Ken Anderson and Bill Martin, they storyboarded each ride, keying in on important scenes from each film and figuring out a way to fit it inside the assigned building.

After researching different types of dark rides at amusement parks scattered along the East Coast, the trio came up with two key modifications that would set their dark rides apart: ultraviolet paint and character-based perspective. Instead of illuminating gags and props with incandescent spotlights, as riders experienced while riding Laffland at New York’s Sylvan Beach Amusement Park, Coats and Anderson drew guests’ attention to important parts of the scenery by coating them in ultraviolet paints and making the sets glow under black lights. Suddenly, the Evil Queen’s castle lair took on an especially eerie countenance and riders began to cower at the sight of Monstro rising from the waves to swallow Pinocchio and his cohorts whole.

More striking still was the way the Imagineers guided guests through familiar animated stories by placing them in the protagonist’s role. Riders who stepped aboard Snow White’s Scary Adventures (originally termed “Snow White’s Adventures” before terrified guests began complaining about the attraction’s unexpectedly dark nature) stepped into the shoes of Snow White herself. They were the ones fleeing from the Evil Queen-turned-Old Hag and the ones who found solace inside the seven dwarfs’ cottage. They were also the ones who took the wheel of Mr. Toad’s snazzy automobile and dashed through the streets of London, wreaking havoc until they collided with a train and were subsequently immersed in the flames of Hell itself. Although guests didn’t always understand their role in the ride, Disney’s unique way of bringing its classic stories to life was widely regarded as an improvement on the standard themed pretzel rides of the 1950s. 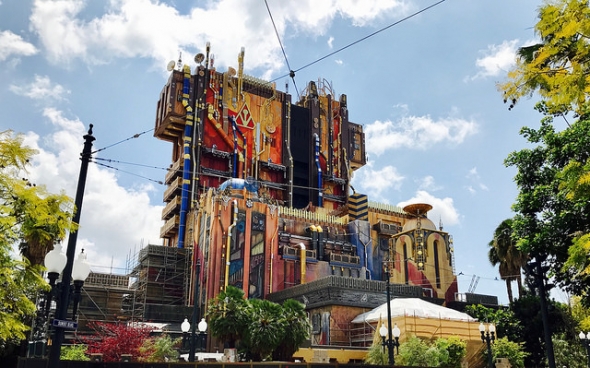 Of course, the Imagineers’ push for innovation didn’t stop with a bucket of paint and good story to tell. Disney continued to refine and restructure its dark rides in the years that followed the park’s opening, bringing new technologies to life and expanding the very definition of the modern dark ride. Today’s dark rides include massive drop towers like Disney’s Hollywood Studios’ Twilight Zone Tower of Terror and Disney California Adventure’s Guardians of the Galaxy – Mission: Breakout!, enhanced motion vehicle-outfitted rides like Disneyland’s Indiana Jones Adventure, and combo shooting gallery-dark rides like the Magic Kingdom’s Buzz Lightyear’s Astro Blasters. And the Disney Parks haven’t been the only theme parks to make improvements to classic dark rides, either. Universal Studios Orlando debuted Harry Potter and the Escape from Gringotts in the summer of 2014 and classified the attraction as a hybrid steel roller coaster and 4D dark ride. With screens that guided passengers through a harrowing journey in the deep recesses of the goblin-guarded vaults, Escape from Gringotts was ranked among the top five dark rides in the world for four straight years during Amusement Today’s annual Golden Ticket Awards.

By 2018, most modern dark rides have moved past the layered black-lit backdrops and cut-and-dried storytelling techniques behind Roger Rabbit’s Car Toon Spin and Pinocchio’s Daring Journey, and for good reason. Technology has not only made it possible to “plus” traditional attractions, but it has provided new, ever-changing ways to keep fan favorites like Indiana Jones Adventure and Star Tours – The Adventures Continue fresh for each ride-through.

On the other hand, that doesn’t explain why a conventional dark ride like Peter Pan’s Flight often commands one of the longest wait times at the Disney Parks, or why the dark-ride filled Fantasyland is often one of the most crowded areas in Disneyland despite its lack of high-speed roller coasters and thrill rides.

So, which is it? Are the simplistic dark rides of the 1950s destined to fade into the past alongside their pretzel ride predecessors? Or have they managed to tap into something that 3-D screens and 35-m.p.h. roller coasters still can’t deliver?