Many theme park guests cut their teeth on old dark rides, from the spooky chambers of Snow White’s Scary Adventures to the harrowing ride through Toad Hall (and hell itself) on Mr. Toad’s Wild Ride. Dark rides have long been considered one of the premiere staples of theme parks and are remembered best for their straightforward storytelling capabilities, black-lit backdrops, and theatrical tricks and gags that keep the rider on their toes from start to finish.

As with any classic attraction, however, most modern-day theme parks—the Disney Parks and Universal Studios included—have moved far beyond painted scenery and visual sleight-of-hand.

Today’s most popular attractions often incorporate some form of advanced technology, whether in the form of 3-D elements (Star Tours – The Adventures Continue, Toy Story Midway Mania), large screens (Soarin’ Around the World, Harry Potter and the Forbidden Journey), or interactive capabilities (Buzz Lightyear’s Space Ranger Spin, Men in Black: Alien Attack), leaving less and less room for the classic rides of yesteryear. While dark rides currently make up 32 percent of all moving attractions at Disneyland and Walt Disney World, and 17 percent of all moving attractions at Universal Studios Orlando, they draw considerably smaller crowds than the ones that flock to the parks’ roller coasters and motion simulators.

Is it possible that dark rides no longer have a place in the future of modern theme parks? Or is there still a compelling case to be made for the simplicity and charm of the old classics? 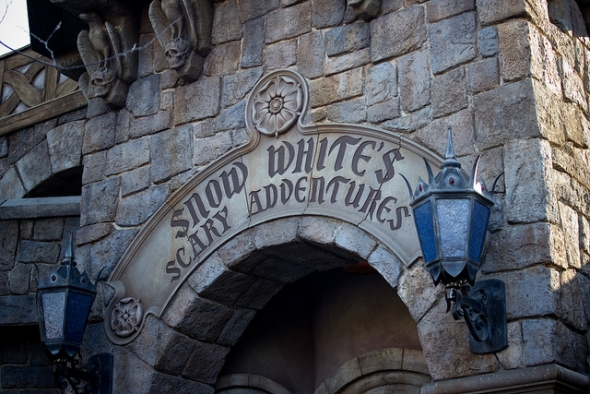 What do we mean when we talk about dark rides? The definition of a “dark rides” varies from source to source and can be incredibly broad; Trip Savvy, for example, defines it as “any amusement park or theme park ride that uses vehicles to send passengers into an indoor environment and through a series of scenes or tableaus.” Within these parameters, a dark ride can be used to describe parts of many different attractions, from Pirates of the Caribbean to Seven Dwarfs Mine Train to Space Mountain.

For our purposes, however, we’ll limit the definition of a dark ride to vehicle-based, track-guided indoor attractions that do not depend on technology (interactive elements, projections, numerous Audio-Animatronics) and cannot be classified as roller coasters. In other words, we’re talking about some of the oldest attractions at theme parks like Disneyland, Walt Disney World, and Universal Studios: Peter Pan’s Flight, Snow White’s Scary Adventures, Alice in Wonderland, Pinocchio’s Daring Journey, Roger Rabbit’s Car Toon Spin, Mr. Toad’s Wild Ride, The Many Adventures of Winnie the Pooh, Ariel’s Undersea Adventure, E.T. Adventure, and The Cat in the Hat, among several others.

The evolution of dark rides: From the Old Mill to the pretzel ride 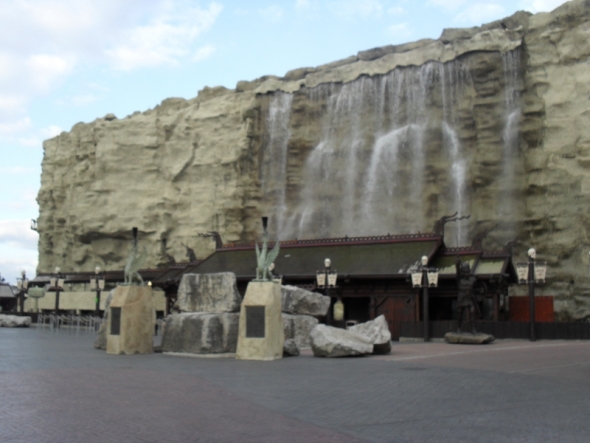 Although dark rides were some of the first attractions guests experienced during Opening Day at Disneyland on July 17, 1955, we can trace their genesis back to the late 1800s, when “mill rides” ferried its passengers on two-rider boats through manmade tunnels that were designed to delight and frighten with their various themed tableaus. The first mill ride to be installed in an amusement park may well have been the Old Mill Ride at Sea Lion Park on Coney Island, which premiered in 1895; others included Garfield’s Nightmare (1901, Kennywood Park), The Red Mill (1907, Luna Park), and Journey to the Center of the Earth (1927, Dorney Park).

The mill ride wasn’t just an early predecessor of dark rides, but of log flumes like Splash Mountain and Frozen Ever After—at the end of its meandering trip through caves and tunnels, several mill rides sent their guests tumbling down chutes for a heart-stopping finale. One of the most famous attractions of this kind was Valhalla, a six-minute indoor boat ride at Blackpool Pleasure Beach in Lancashire, England. With awe-inspiring fire effects, water cannons, and multiple drops, it still tops the list as the longest such ride among any still standing at today’s theme parks.

While attractions like Splash Mountain, Pirates of the Caribbean, and “it’s a small world” share varying similarities with mill rides of decades past, dark rides like Peter Pan’s Flight and Spaceship Earth don’t fit so neatly in that category. In 1928, inventors Leon Cassidy and Marvin Rempfer siphoned elements of the mill ride to create their own land-based version, which was eventually termed the “pretzel ride” and featured small ride vehicles that traveled along a single electric rail through indoor pavilions. The original pretzel ride was constructed as the centerpiece of the now-defunct Tumbling Dam Amusement Park in Bridgeton, New Jersey; in the decades to follow, over a thousand similar themed rides became staples at amusement parks and state fairs around the United States, from Coney Island’s infamous Spook-a-Rama to The Haunted Pretzel at Pennsylvania’s Bushkill Park.

The pretzel ride was so-named for its layout, which snaked through show buildings and created frequent, sharp turns that made the track ideal for cloaking surprises and gags—at first, just with sound effects, and later, with track-triggered visuals. As a result, many pretzel rides were outfitted as haunted houses, of which Disneyland’s ghost-ridden Haunted Mansion is a prime example. The twists and turns that so characterized the pretzel ride had myriad uses outside of the traditional haunted house, however. Riders could be directed through a straightforward storyline with key scenes separated by strategic turns in the track, and the simple one-track system provided a stable framework around which future ride designers implemented elaborate tableaus of Audio-Animatronics, layered 3-D visuals, and various interactive elements.