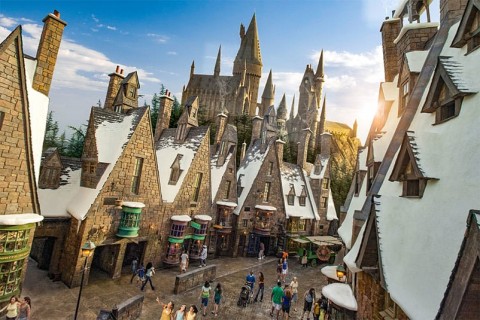 The Boy Who Lived saved all of you unknowing Muggles from He Who Must Not Be Named. Americans pay tribute to this teenager each day. We visit the themed land that recreates the wonders of Hogwarts School of Witchcraft and Wizardry, Hogsmeade, and Diagon Alley. As No-Majs, you are simply incapable of understanding everything that takes place in these themed lands. Please allow me, an Auror from the Ministry of Magic, to enlighten you on a few of the powerful enchantments on display. Here are a few magical facts about the Wizarding World of Harry Potter.

Many Harry Potter creatures are hidden in plain sight

The engineers at Universal Studios have a bit of a chip on their shoulder. They know that they live in the shadow of Disney’s Imagineers, and they want to prove that they’re anything but second-best. The Wizarding World of Harry Potter provided these Muggles a chance to breathe some magic into the lives of theme park tourists. To create the most authentic experience possible, park planners at Universal knew that they’d need to add a few guests from Harry Potter lore to the parks.

Some of these characters from the books are easily visible. The Magical Menagerie shop is home to a Crumple-Horned Snorkack. These things are so rare that Luna Lovegood made it her mission in life to see one, but author J.K. Rowling has confided that Lovegood never did. Any No-Maj who wanders into the shop can see it, though.

Others are less obvious. For example, you won’t see house elves at The Three Broomsticks. If you look up in the rafters, however, you’ll see shadows of them dancing. When you want to see the best-known house elf, head over to 12 Grimmauld Place. Watch the windows above the door for long enough and you’ll witness him peeking out the window every couple of minutes. The Potterverse is all around you when you visit the Wizarding World.

The snake does tricks

Magical Menagerie is much more than just a store. It displays some of the most magical tricks in the entire themed land. One in particular is a lovely tribute to the Harry Potter movie franchise. In the first film, Harry Potter and the Sorcerer’s Stone, the Boy Who Lived visits a snake. To Harry’s surprise, the snake can understand him. You can watch the clip above.

At Magical Menagerie, Muggle engineers have recreated this scene! You just never realized it. When you walk up to the snake and talk, its motions will mirror the ones from the film. It will even speak in Parseltongue with you, although you won’t know it unless you’ve studied Parseltongue, too. You can compare the interactions in the movie vs. the ones at the store that I’ve linked below.

That’s only a slight exaggeration. A more precise statement would be that Moaning Myrtle is in every bathroom. Whenever you’re visiting Hogsmeade and nature calls, you’ll hear Myrtle moaning. It doesn’t matter whether you’re in the men’s or women’s bathroom at the time. Universal programmed audio of her lamentations into the sound projectors in all the bathrooms. So, you will hear a ghastly cry anytime you use the facilities. It sounds kind of horrible until you think about the sounds that you’d otherwise hear in these places. Moaning Myrtle doesn’t seem that bad by comparison.

Some members of the Potter tribe didn’t participate

One of the most wonderful aspects of the Wizarding World of Harry Potter is its frequent guests. The Muggle actors who portray members of the Potterverse love seeing their characters brought to life at the themed land. Many of them participate in special events like A Celebration of Harry Potter, where they are honored guests.

During the construction of the major attractions at the Wizarding World, Universal hired many of the cast members to return to their role from the movies. Almost all of them happily accepted, which is why you’ll find adorable pictures of the Weasley Twins sampling the goods at Weasleys’ Wizard Wheezes. A couple of thespians weren’t interested in reprising their roles, though.

When you board Harry Potter and the Forbidden Journey, you will hear the voices of the entire cast, something you can confirm on IMDB.  For Harry Potter and the Escape from Gringotts, legendary No-Maj Daniel Radcliffe chose not to participate. The voice of Harry Potter comes from Adam Sopp, a British bloke best-known for portraying the character in the videogame series.

That IS Emma Watson’s voice on the ride, but she too chose to pass on the second dark ride/roller coaster. Universal employs archival footage for her appearances. It’s strange that actors as busy as Helena Bonham Carter and Ralph Fiennes took the time to work on the ride, but the two main leads chose to pass.