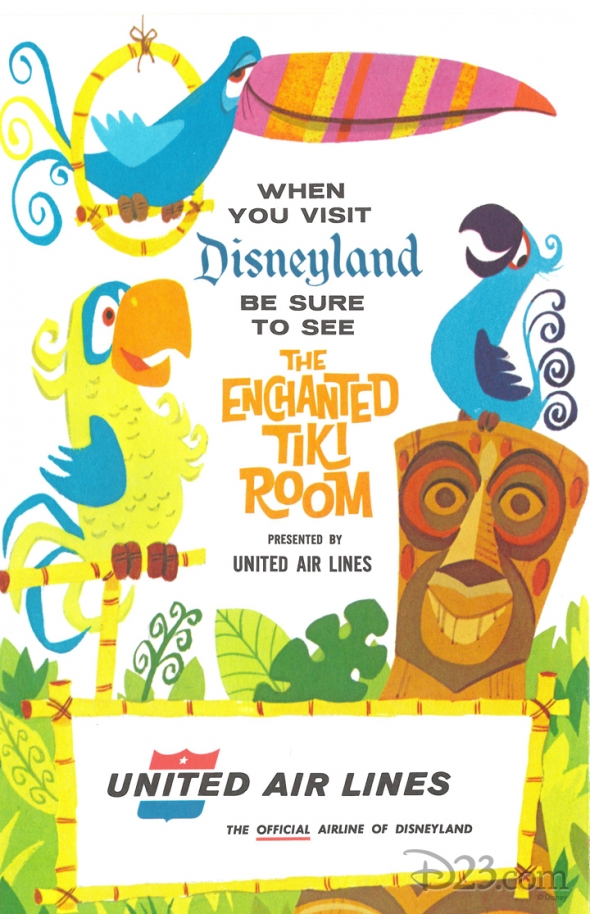 A single Audio-Animatronics figure – known as a “barker bird” – was placed outside of the attraction’s entry and programmed to spiel like a carnival barker to usher guests in. So unthinkable and unimaginable was the technology that guests gathered around to stare in wonder and awe at the inexplicably intelligent bird. 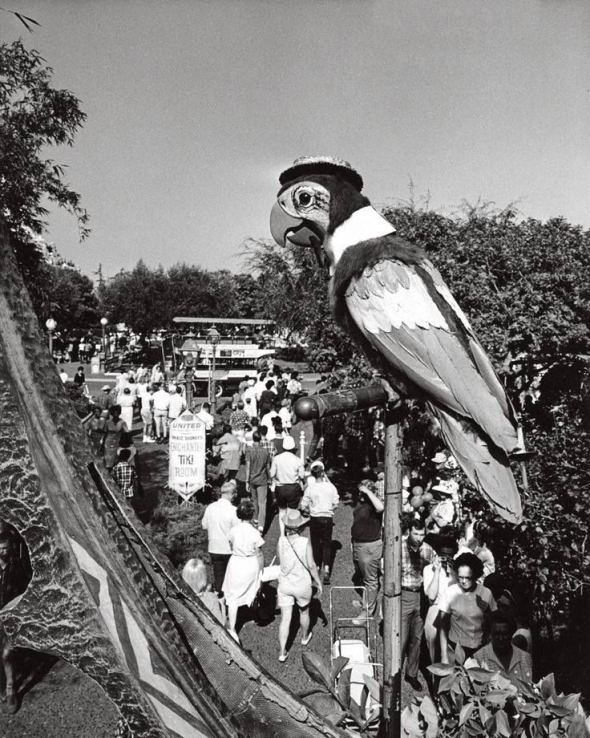 In fact, “Juan” (cousin of the attraction’s M.C., José) became an attraction in his own right, drawing gawking crowds who clogged Adventureland’s entrance, necessitating his removal. (A replica exists today at the Walt Disney Family Museum in San Francisco, programmable by guests.)

Even for his short time on display, Juan did his job: giving some point of reference for the unthinkable promise of “singing birds and flowers” inside the attraction. So when guests did step over its threshold, what did they find? Well that’s the fun part.

Nestled into a volcanic grotto alongside Adventureland's entry, the Enchanted Tiki Room is indeed a sight to behold, with its thatch-roofed South Seas architecture, burning Tiki torches, and expansive lanai courtyard. At least since 1976 when Dole took over sponsorship from United Airlines, this relaxing tropical grotto is also the place to secure your Dole Whip – the pineapple soft serve treat that's become an icon of the Tiki Room... and maybe, for all of Disneyland.

As you wait for the doors of the Tiki Room to open, a most wonderful and storied "pre-show" of sorts awaits in the Enchanted Tiki Garden. Here, Māori and Hawaiian gods scattered around the courtyard come to life one-by-one to explain their gifts to the people of Hawaii. Do yourself a favor: slow down, take a break from reading, and enjoy this spectacularly simple and classic introduction in real time with this video:

The pounding of drums reverberating from each draws guests' eyes as the god speaks its story and animates with simple special effects. It's easy to see why audiences back in the attraction's opening era would've found this exploration into pan-Pacific mythology so fascinating, and it remains so today. In fact, one might argue that this tropical tempo-setting display is among the most wonderful "hidden gems" in Disney Parks – an attraction in its own right.

Once the doors open, we're ushered into a dimly-lit interior of the ornate hut. Even in the darkness, it's easy to see a few birds roosting in and around the tropical plants that surround the room, with ornately-carved totem poles on each corner, tikis lofted high around the room's outskirts, and a central pedestal.

What comes next must be seen to be believed... We invite you to sit back, relax, and take in the South Seas simplicity and ease of the Enchanted Tiki Room:

The Enchanted Tiki Room stars José, Fritz, Michael, and Pierre – four macaw "emcees" – who lead their feathered glee club in a tropical singalong. Filled with island ease, superb songs, and technology that remains surprising and mostly-invisible even to modern audiences, the attraction is classic through-and-through; an icon of Disneyland's early years, and a true marvel.

Naturally, that meant that the story of the Tiki Room wouldn't end in California...

When work began in earnest on the new “Disney World” to be built in Central Florida, the mission was clear: this new “Disneyland East” would need to feature all of the best parts of Disneyland, scaled up and ready for the “Vacation Kingdom of the World” and the international draw it would provide.

In the decade since its debut at Disneyland, the Enchanted Tiki Room had certainly earned a place in the new Magic Kingdom in Florida, and it was naturally reproduced for the park. Sponsored by the Florida Citrus Growers, the renamed Tropical Serenade opened with the park on October 1, 1971.

Unlike Disneyland's (which had been wedged into a small plot of land in Adventureland's entry – according to its attraction poster below, "at the gateway of Adventureland"), Magic Kingdom's Adventureland had the Enchanted Tiki Room built in as one of its core attractions. In Florida, the iconic "Sunshine Pavilion" and its multi-tiered tower was deliberately placed as Adventureland's visual "weenie," drawing guests in from the hub. Despite the name change, a new pre-show, the more elaborate and iconic Sunshine Pavilion housing it, and the auxiliary inclusion of the Florida Citrus Growers’ custom-made Orange Bird mascot, the actual show itself was a carbon copy of Disneyland’s 1963 original. 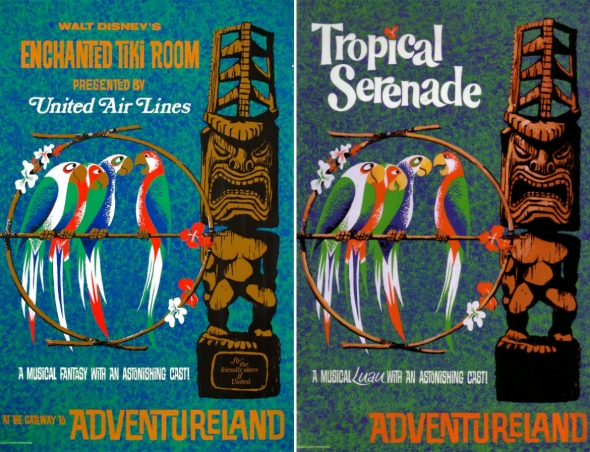 Now, Disneyland fans will be quick to tell you that Walt himself never stepped foot in Magic Kingdom, nor any other square foot of the Orlando resort that shares his name… At least, not since it was nothing more than undeveloped land. Whether that’s relevant to the resort’s culture and nostalgic reverence or not is an argument for another time, but the presence of a genuine, unaltered, Walt Disney original in Magic Kingdom is something that many celebrated. And of course, such a timeless, reverent, and storied celebration of mid-century pop culture stamped by Walt’s own fingerprints would remain a beloved fan-favorite forever...

Utilizing Disney Genie+ On The Cheap

Personal Shopper or Scalper? How Do YOU Feel About Disney Parks' "Reseller" Black Market?