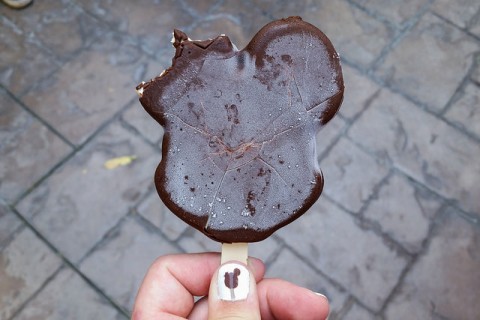 Almost as long as there have been theme parks, there has been theme park food. From funnel cakes and deep-fried soda at state fairs to the iconic hot-or-frozen Butterbeer at Universal Studios Orlando’s Diagon Alley, chowing down is an integral part of the theme park experience—and, arguably, no one does it better than the Disney Parks. Over 63 years, Disney’s six parks have expanded their fare from expected offerings like hot dogs, popcorn, and ice cream to more elaborate dishes: jambalaya at Blue Bayou in New Orleans Square, ukiwah shrimp buns at Tokyo DisneySea, chili-ginger glazed pork drumettes at the newly-opened Lamplight Lounge in Disney California Adventure’s Pixar Pier.

While modern theme park food has drastically departed from the simple dishes of the 1950s and 60s, the philosophy behind Disney Parks cuisine remains the same. That’s because Disney approaches food the way they approach everything else: with the desire to create a fully immersive, innovative experience. Let’s take a look at how the parks have interpreted that philosophy over each of the past six decades. 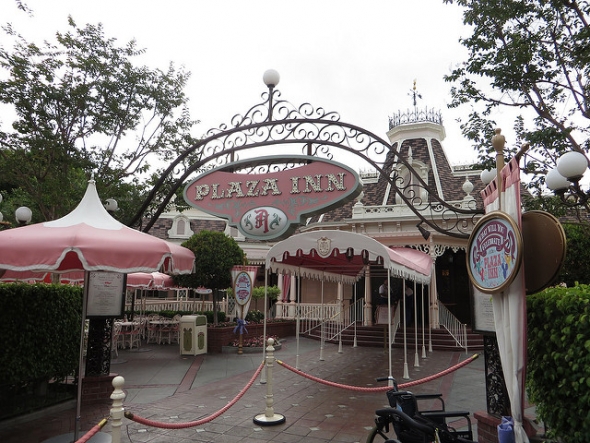 Two days before Disneyland opened its gates on July 17, 1955, a special souvenir program ran in the Independent Press Telegram. Interested visitors could read up on the history behind Fantasyland’s historic carousel or get hyped for the replica of an 1890 grocery store (today, Market House is little more than a turn-of-the-century façade for Main Street, U.S.A.’s only Starbucks location). For the aspiring foodie, an entire section of the paper was devoted to the new eateries around the park.

“Good Eating Land at Disneyland!” the Telegram proclaimed. “Like Adventureland and Fantasyland, the new ‘Kingdom of Good Eating’ at Disneyland is another great attraction. Fine restaurants, unique refreshment stands and interesting luncheon spots abound in Disneyland. Dining Disneyland style is an unforgettable experience. The food’s as fabulous as the fun, too!”

What made the proclamation so interesting wasn’t Disney’s claim that the park cuisine could be as unforgettable as the rest of its attractions, but rather that Walt wasn’t responsible for the majority of the restaurants and food stands within the park berm. He was instead dependent on vendors to sponsor and operate their own businesses inside Disneyland—according to historian Sam Gennawey, many of the vendors were unable to keep their stores and restaurants open every day or stick to scheduled hours of operation, nor were they eager to do so given their uncertainty about the viability of the park.

During the first half-decade of Disneyland’s operation, guests were treated to a variety of unusually-themed food stalls and sit-down dining experiences. Tomorrowland’s futuristic Space Bar supplied diners with a wall of vending machines and standard counter-service burgers and chili dogs. On the bank of Frontierland’s Rivers of America, breakfast aficionados were treated to syrup-laden pancakes and waffles at Aunt Jemima’s Pancake House. Hungry (or, as was more often the case, “hangry”) kids could run over to Casa de Fritos and grab a nickel’s worth of Frito chips from the vending machine. The crème de la crème, however, was the Red Wagon Inn (now Plaza Inn), which offered Swift Meats-sponsored dishes like grilled halibut steak, baked ham, and chicken pot pie. The building itself was easily the swankiest on the property, decked out in the Victorian style and elegantly decorated with antiques. Not only was it rumored to be Walt’s favorite restaurant of the time, but it doubled as a prototypical Club 33, with private quarters for the park creator and his guests.

Walt didn’t just want to ply his guests with stereotypical carnival snacks—popcorn, cotton candy, and the like—he intended to bring them never-before-seen dining experiences as integral to their enjoyment of Disneyland as a trip on the Jungle Cruise or a spin on King Arthur’s Carrousel. 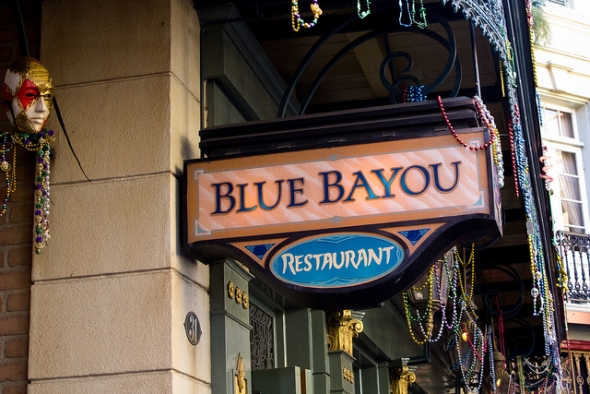 Walt introduced his guests to an array of unique themed dining experiences in the 1950s, but as with everything he created, he was constantly finding new ways to plus the park’s restaurants and food stands. Amid tamer offerings—including Adventureland’s über-popular French Polynesian restaurant, Tahitian Terrace—he began experimenting with something that took the idea of themed dining one step further. Finally, a decade past Disneyland’s grand opening, he had struck gold.

According to Marcy Carriker Smothers, author of the definitive guide to Disneyland cuisine, Eat Like Walt, Blue Bayou was considered among the first themed restaurants in the United States. While Walt oversaw the creation of the restaurant, he refused to open it to the public during the premiere of New Orleans Square in July 1966. Pirates of the Caribbean—one of two marquee attractions within the land, and the picturesque backdrop for Blue Bayou’s faux outdoor dining area—was still under construction and wouldn’t open for another eight months. Walt was content to wait until the attraction was finished and guests could have a more complete dining experience. For that reason alone, both Pirates of the Caribbean and Blue Bayou were scheduled to debut on the same day.

Blue Bayou was proof that theme parks could offer guests more than cheap thrills and assorted junk food: They could transport guests to an entirely new location through gourmet cooking and immersive dining areas. For the first time in theme park history, parkgoers were permitted to dine within an attraction—and what a view they found in New Orleans Square. In the perpetual twilight of the bayou, diners were ushered to candlelit tables and invited to select from a range of decadent dishes, including the iconic Monte Cristo sandwich (over 1 million of the sandwiches sold in the restaurant’s first 45 years of operation), herb-crusted racks of lamb, surf and turf, and bone-in steak. While Disney continues to add to its gourmet dining options year after year, few restaurants have tried to replicate the Blue Bayou’s total immersion in another attraction.

(Fun fact: It was around this time that the Enchanted Tiki Room was initially drawn up as an Audio-Animatronic dinner theater, rather than the musical revue it is today.)