5 INSANE Rides You'll Want to Grab Your Passport For 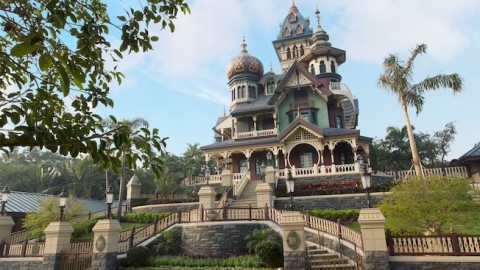 The four theme parks operating outside of North America have created some of the most wonderful attractions in the world. The Walt Disney Company and its licensee in Japan, The Oriental Land Company, strive to create unforgettable rides that will linger in your mind many years after your visit. We previously highlighted several of them. In this article, we’re going to discuss a few more, some of which ARE coming to American Disney theme parks. Others are ones that Disney isn’t planning to transfer…but they should!

While Hong Kong Disneyland has suffered its share of struggles over the years, the park has one perfect attraction. Mystic Manor is its equivalent of Haunted Mansion, only it’s much more liberal in its interpretations of gothic entertainment. Steeped in Asian culture, this version of the premise is somehow more slapstick and more supernatural.

The titular Mystic Manor is home to the aptly named Lord Henry Mystic, a collector of the macabre. He doesn’t have a nefarious agenda for his menagerie. To the contrary, he doesn’t trust anyone else with the items. Unfortunately, his pet monkey, Albert, has ready access to them. You can guess what happens next.

Mystic Manor is bright, stimulating attractions with cutting edge special effects. It’s like the best combination of the line queue from Expedition Everest along with the ride mechanics of Haunted Mansion and visuals from a Pixar movie. Disney NEEDS to bring some version of this premise to the United States!

My admiration for Tokyo DisneySea is well-documented, but that’s not why Sinbad’s Storybook Voyage deserves a mention. I’m a huge fan of the design of It’s a Small World, even if the song does drive me a bit bonkers. Similarly, I view the Gran Fiesta Tour Starring The Three Callaberos as one of the hidden gems of Walt Disney World. I love these indoor boat rides that tell a story while delivering a wonderful change of pace from the hustle and bustle of a theme park day.

Sinbad’s Storybook Voyage has a similar ride design. It’s an indoor dark ride that takes place on the water. You ride a boat through various sets that retell the story of Sinbad. It was originally a dark tale, but park officials accepted guest feedback and evolved it into a more genteel experience. They also added a lovely musical soundtrack with works written by living legend, Alan Menken.

Perhaps no ride better reflects the early days of Disneyland than Autopia. Walt Disney and his team loved this simple but satisfying ride concept so much that they duplicated it multiple times. Several versions of Autopia were in operation at Disneyland, and they resided at different themed lands.

Aquatopia is something of a spiritual successor, albeit one that takes place on the water. From a distance, the ride looks like bumper cars with hoverboats. In execution, it’s much more complex. The ride is one of only a handful in the world to utilize trackless technology.

This freedom of movement enables Aquatopia to build the illusion of danger, as boats travel dangerously close to whirlpools. Okay, no adult would be concerned, but it’s a delightful element for children. And kids are definitely the target audience for Aquatopia, one of the best family attractions on the planet.