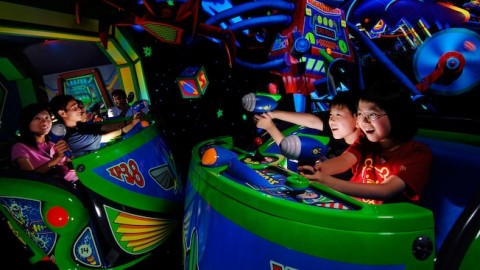 When you and your friends are feeling competitive at Magic Kingdom or Disneyland, you know where to go! Since 1998, Magic Kingdom has delivered tons of fun for friends who want to wage war on the intergalactic battlefield, and Disneyland joined Star Command in its fight against a malevolent emperor. This videogame deftly disguised as an attraction is different each time you play it, and the underlying Imagineering concepts are sublime. Let’s go Behind the Ride to learn all the secrets of Buzz Lightyear's Space Ranger Spin aka Buzz Lightyear's Astro Blasters.

Image: DisneyYou may feel a bit jaded about the several Buzz Lightyear rides around the world. You’ve ridden them so many times by now that you take for granted the majestic backdrop of the attraction. What you’ve forgotten is how remarkable a feat Buzz Lightyear was during its early days.

Toy Story the movie came out in 1995. At the time, Pixar was an upstart computer animation company that Disney wouldn’t purchase for another decade. Building a Walt Disney World attraction based on a Pixar film was a daring decision at the time. The only other major non-Disney licenses at Walt Disney World at the time were Star Wars and the Twilight Zone. Also, Pixar was the competition. They were trying to horn in on the animated film industry, Disney’s bread and butter for 60 years and counting!

Fortunately, park planners weren’t territorial about animated cinema. To the contrary, they delighted in the adventures of Woody and Buzz and wanted to bring them to life in an attraction. Woody’s time would have to wait until Toy Story: Midway Mania!. Buzz got the call first. His backstory naturally lent itself to a theme park ride. 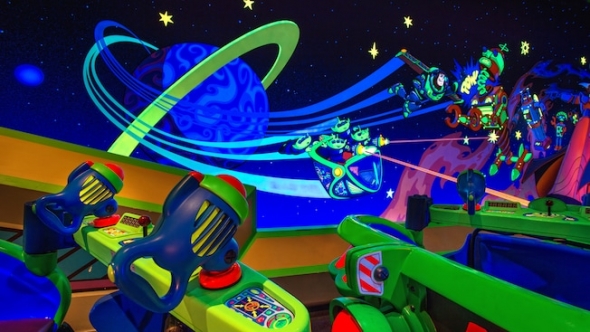 Image: DisneyToy Story buffs know that Buzz is a manufactured toy, but he believes that he’s a member of Star Command. These soldiers are, for lack of better terminology, guardians of the galaxy. Their primary mission is to defeat Zurg, the nefarious ruler of a planet named Z (somehow spelled Xrghthung).

The Buzz Lightyear attraction brings the plight of Star Command to light. You must battle a swarm of evil robots, all of whom are programmed to enforce Zurg’s will. But the conceit of this ride is that the robots are only an aggravation.

Your real mission is to prevent Zurg from claiming batteries to fuel his killbot armada. So, you’ll see bad guys throughout the ride, but you’ll mainly aim at the batteries of Little Green Aliens. Their ships need these batteries to travel through space, but they also double as power supplies for Zurg’s killer droids.

The construct of Buzz Lightyear Space Ranger Spin and its siblings is that you are new to Star Command. You must prove yourself by claiming as many batteries as possible. Armed with a starship and your special gun, you head out into the blackness of space, where you will encounter Zurg at one point. It’s world-building done right, which explains why the ride is so timeless in nature.