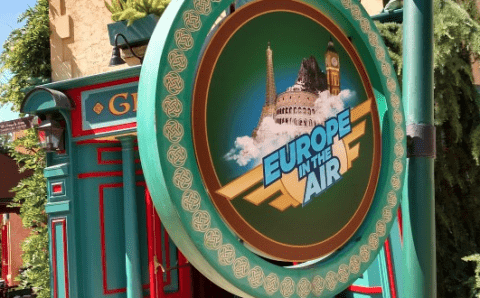 Humans have spent much of their modern history trying to take to the skies, and for nearly as long, theme parks have sought to create the seemingly impossible sensation of soaring. From the gentle charm of sailing over London on Peter Pan’s Flight to the breathless, tear-jerking wonder of AVATAR Flight of Passage, engineers have come a long way in granting humanity the power of flight. But once in a while, they get it wrong.

So today, we have another in-depth case file to add to Theme Park Tourist’s Declassified Disasters series… Already we’ve taken you behind-the-blunders at some of the world’s most disappointing attractions, like Disneyland’s sputtering Rocket Rods, SeaWorld’s sunken Journey to Atlantis, Cedar Point’s aptly named Disaster Transport, Busch Gardens’ nightmarish Franken-coaster Drachen Fire, and many more by way of our Legends Library. 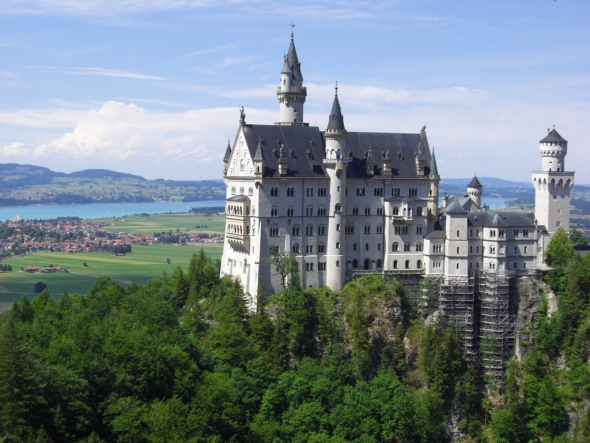 And sadly, our next highlighted horror is another could-be classic at Busch Gardens Williamsburg – Europe in the Air, a sightseeing simulator that just couldn’t stay airborne. Taking a page from Disney’s own soaring masterpiece, the Virginian park set out to turn their empty simulator into a headlining look at the wonders of Europe… But to get there, we’ll explore the origin of the Ireland-set simulator and see what a ride on Europe in the Air was really like. Ready for takeoff?

Fly me to the Moon

Though the sensation of free flight has been a part of theme parks since their earliest years, the search for the skies has had a few noteworthy milestones. Of exceptional importance today: the introduction of the “motion simulator.”

But it may not be fair to call the introduction of simulator rides a discovery as much as a repurposing. Simulators had been used to train military pilots for years, but the expensive and elite technology was becoming increasingly complex and technological through the 1980s, culminating with a new and unexpected application. 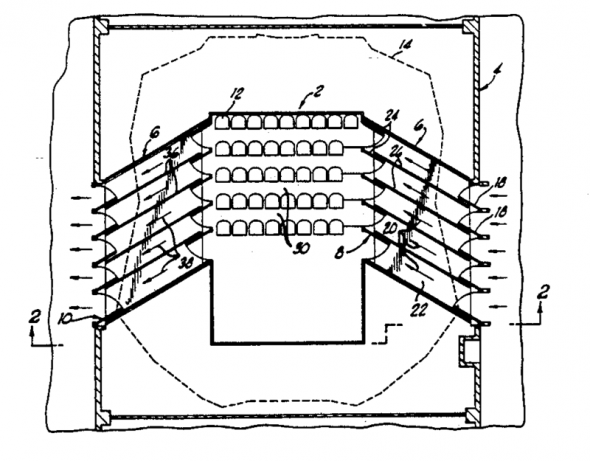 In 1986, Walt Disney Productions purchased four enormous motion simulator pods. Each was attached to a base supported by hydraulic actuators capable of tilting forward and backward (pitch), tilting side to side (roll), and turning left and right (yaw). In combination and with synchronized visuals projected inside the enclosed cabin, these simple “six degrees-of-freedom” could perfectly simulate extreme acceleration, diving, banking, shuffling, and weightlessness. 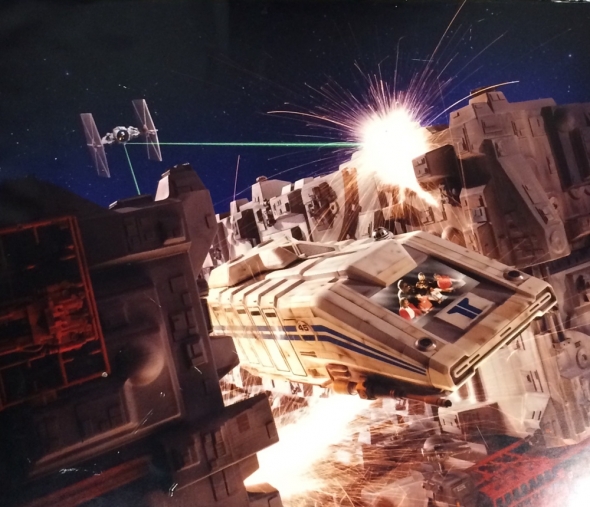 Of course, it’s no surprise what this new technology was for. It’s the technology at the heart of a Disneyland classic and beloved Lost Legend: STAR TOURS – the ride that changed everything at Disney Parks. As never before, STAR TOURS captured the feeling of true flight, with riders speeding through the Star Wars universe aboard the StarSpeeder 3000s blissfully unaware of the cutting edge innovation (and unexpected application of that simulator) that made it possible.

While the ride was being duplicated for installation at the Disney-MGM Studios in Florida, the capabilities of the ATLAS were already being explored just a few miles away at EPCOT Center’s Lost Legend: Body Wars. 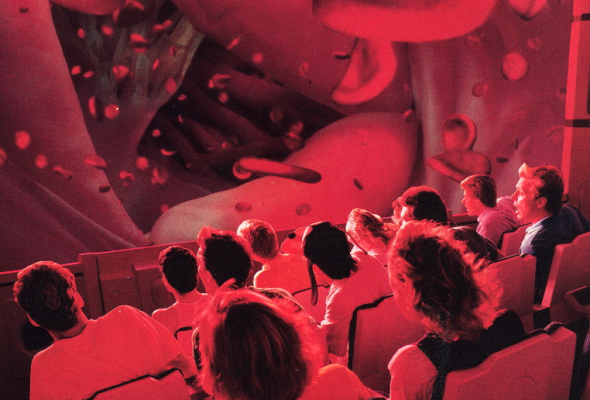 Replacing the vastness of space with the inner workings of the human body, that E-Ticket tucked away inside of the now-vacant Wonders of Life pavilion likewise gave life to flight, albeit in rivers of blood and pulsing organs rather than the skies.

By 1990, two simulators exploring worlds interstellar and intravenous were whisking guests away into adventures that would’ve been impossible just a few years earlier. And though Universal was inching closer and closer to the opening of its first simulators (The Funtastic World of Hannah Barbera and the Lost Legend: Back to the Future – The Ride), an unlikely contender would be the next to apply the young technology for fun...

Legends of the Old Country

Since it opened in 1975, Busch Gardens Williamsburg in Virginia has been an unusual and spectacular player in the theme park industry. Given its location outside of the industry Meccas of California and Florida and its seasonal operating schedule, the park would read on paper as a closer companion to Cedar Fair or Six Flags parks. And yet, Busch Gardens is something altogether unique.

Since its opening, the park has been recognized as one of the world’s most beautiful. Located in the forested slopes and valleys of the colonial Historic Triangle, the park is a rare reprieve from the non-stop Americana of Williamsburg and instead is meant to transport guests to “The Old Country” by recreating storybook-style villages representing England, Scotland, Italy, Germany, and France. 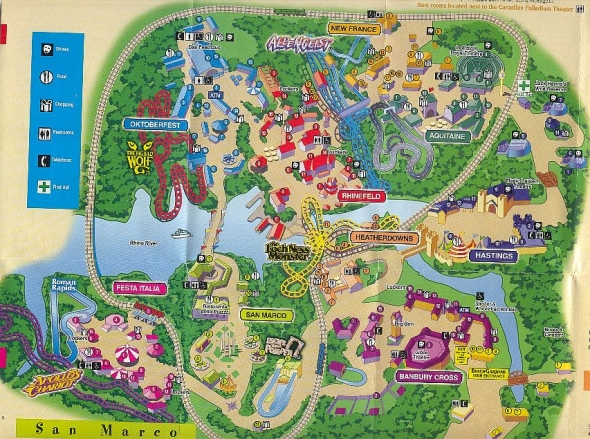 Even as the park has added a handful of spectacular roller coasters (seemingly with a “quality over quantity” mantra), it’s noted for the fact that food, entertainment, and shopping remain attractions in their own right. Busch Gardens is perhaps an example of that most respectable kind of theme park: one where you could spend a full day, ride nothing, and still leave feeling satisfied.

If you are a rides person, though, the park’s attractions are altogether thoughtful, connecting to lore, myths, stories, and styles of the European countries they’re placed in, always smartly placed among the landscape, like Escape from Pompeii in Italy, Scotland's Loch Ness Monster, or the celebrated Lost Legend: Big Bad Wolf in Germany. And for at least a while, one of the park’s England-themed hamlets featured an attraction so cutting-edge, it put Busch Gardens on the map… 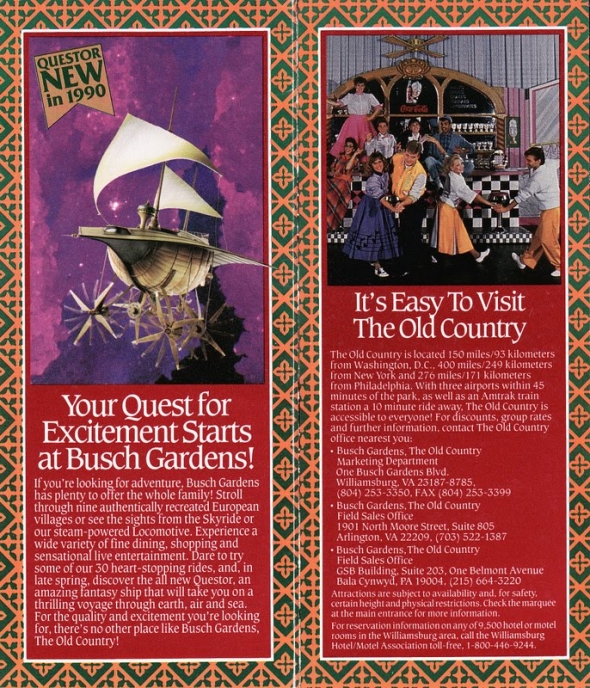 In the wake of Disney’s simulators setting a new standard for the industry, who would’ve expected that a small, seasonal park in Virginia would be the next to feature the technology? And yet, in 1990, Busch Gardens opened the third major simulator attraction on the planet.

At that time, the park featured two distinct villages representing various eras of British history. Banbury Cross – the park’s entry and “Main Street” equivalent – was designed to resemble a foggy British town in the era of Shakespeare, lorded over by a recreation of the Globe Theatre and a twisting, cobblestone street of Tudor-style shops and restaurants. But passing beyond the hamlet and around the corner, a wooden bridge high above a green valley would lead into another “land” in the park: Hastings. 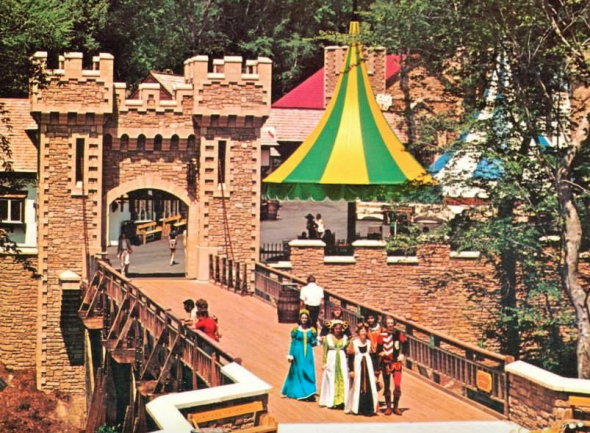 A sort of medieval village of castle towers and tournament tents, this village was home to Questor – a ride unlike any other.

Questor, it turns out, is the name of a steampunk-style “velocity vehicle” that would be right at home in a Jules Verne novel; a mix of airship and submarine, powered by Jurbillium – a pulsing, glowing energy produced by our thought waves! 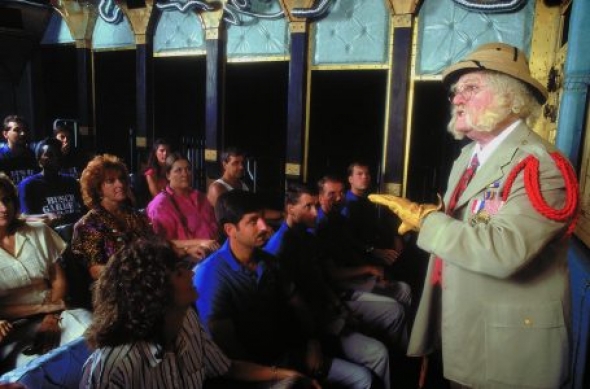 The runaway ride was a cast as a search for the ancient and powerful Crystal of Zed. En route, guests slammed through the crystalline Amethyst Mountains, were magically "drained" into an underwater world, cruised down a river and nearly toppled over a waterfall, and finally ricocheted through a rocky chasm in a freefall dive to capture the Crystal for good.

You can take a virtual ride on the legendary Questor here:

Admittedly, the ride itself is a hodge-podge of settings and scenes filmed on-location and on scaled miniatures that wouldn’t exactly mesmerize modern audiences… But as a breathless adventure creatively adapting the simulator technology previously only attempted by Disney, it's a marvel; a treasured remnant of the era, and a brilliant example of a new way to utilize an ATLAS system.

But change was coming, both to Busch Gardens and to simulators… Read on…