The Colorful History of Gay Days at Disney Parks 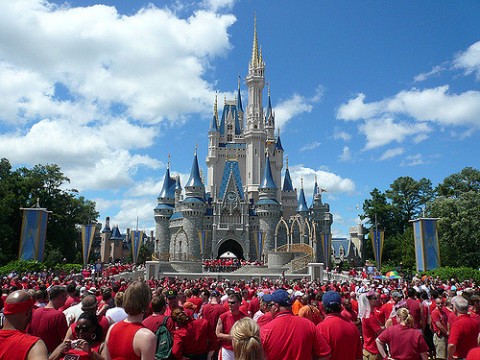 From the vintage three-piece suits and flapper dresses of Dapper Day to the whimsical Doctor Who-inspired Galliday, the Disney Parks play host to no shortage of delightful, albeit unsanctioned events throughout the year. Guests looking to show off their retro Goodwill finds will find plenty of photoshoot opportunities during the bi-annual Dapper Day, while those who prefer to sport goth, steampunk and rockabilly attire were encouraged to do so during the now-obsolete Bats Day. Still others congregate at the parks to celebrate everything from Doctor Who to rave culture and, uh, conga lines.

Then there’s Gay Days, a multi-day celebration of the diverse and inclusive LGBTQ+ community. It also happens to be one of the most popular and well-attended events at both Disneyland Walt Disney World from year to year, though Disney has yet to officially attach its name to the gathering. Attendees are invited to don bright red shirts in order to easily identify each other (and demonstrate what is often a substantial turnout), while the parks supply a plethora of rainbow sugar cookies, candy apples, mugs, antenna toppers, pins, and Mickey ear hats to commemorate the occasion.

Recently, Disney debuted exclusive “Mickey Mouse Rainbow Love” ear hats and sequined rainbow Minnie ears—all intended to capitalize on a celebration they’ve yet to claim as their own. Still, it’s another step forward for a company that once went so far as to physically remove same-sex couples from their parks.

Before the celebration kicks off this spring, let’s take a look back at the history of Gay Days: where and why it originated, Disney’s initial reaction to the gathering, and the changes that have rippled throughout the company as a result. We’ll even go over a few tips to help you make the most of the event. 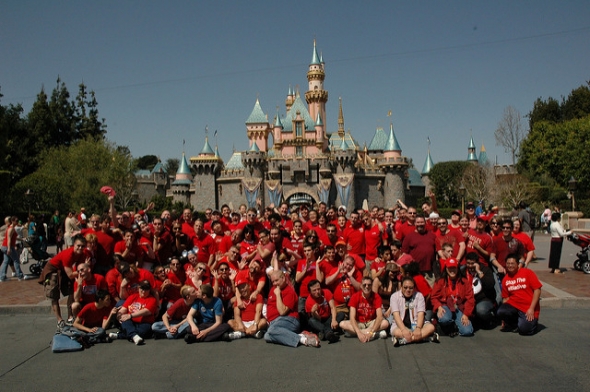 Thirteen years before the first official Gay Days event was launched in 1991, a group of LGBTQ+ business owners decided to rent out Disneyland for the day. They knew the company wouldn’t look favorably on a group of non-heterosexual guests taking over the park, even for a few hours, so they dubbed themselves the “Greater Los Angeles Restaurant and Bar Association” in order to make the reservation. The plan went off without a hitch—that is, until a week prior to the event, when Disney inevitably discovered the purpose behind the event (or, rather, the people behind the event, as there was no ulterior motive other than having fun) and started to panic. While the park couldn’t shut down the gathering, they did everything in their power to contain it: increasing security within the gates, canceling scheduled entertainment, and monitoring Disneyland’s dance floors for the slightest interaction between same-sex couples.

For a while, that was the last company-sanctioned LGBTQ+ event Disney permitted on its property, even as the parks became entangled in multiple civil rights lawsuits brought on by its guests. In one of the most famous cases to come to light, 19-year-old activist Andrew Exler (known today as “Crusader”) decided to take action after his female roommate was asked to stop dancing with another woman. He brought a male friend to the park’s late-night celebration and danced with him while the security guards changed their posts. It didn’t take long for the park to notice the couple or remove them from the area, at which point Exler filed suit against Disney on the basis of discrimination. Despite Disney’s protests that an LGBTQ-friendly policy would go against Walt Disney’s wishes or compromise the safety of guests by angering homophobic international visitors and members of the military, the jury almost unanimously sided with Exler. By 1987, the park adopted both written and unwritten policies to prevent similar discriminatory practices from taking place again. 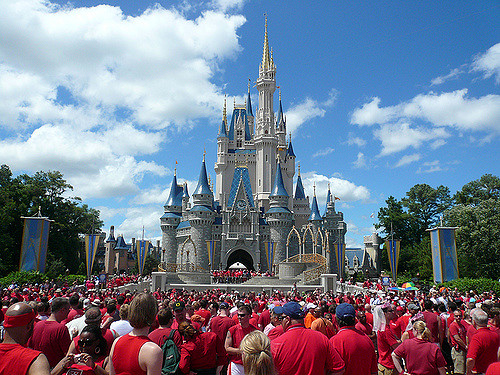 The event we know today as “Gay Days” did not start on the West Coast, however, but in Orlando, Fla., during the summer of 1991. Local resident Doug Swallow was organizing get-togethers with his friends on the online bulletin board service Compu-Who? when he first came up with the idea of a day at Disney. There would be no political protests, no sign-waving or demonstrations staged among the roller coasters and costumed characters of Florida’s family-friendly park. “I was just wanting to see something done for fun,” he said.

With the assistance of local media and press, Swallow’s informal gathering soon began to snowball into a massive event. He selected a weekend in June, when the park was likely to be less crowded than usual, and encouraged attendees to wear red to identify each other—as it was easy to pick out in a crowd and safe for those who weren’t yet comfortable or willing to sport rainbow colors (a clear marker of LGBTQ+ identity). According to various reports, somewhere between 500 and 3,000 participants congregated at the Magic Kingdom for the first official Gay Day on June 1, 1991, a number that would only continue to expand with each subsequent anniversary.