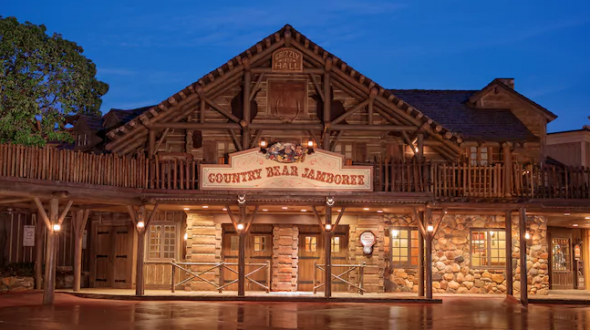 Come one, come all, and step on into the warmth and ease of Grizzly Hall, established 1898! The foyer of this country music dance hall is the perfect place to rest your feet for a few moments as you admire the oil painted portraits around the lobby – a comfortable introduction to the long-standing members of the Country Bears that we're liable to meet during today's foot-stompin' revue.

It won't be long until the doors open, and when they do, we're ushered inward to the lantern-lit auditorium. Take a seat anywhere you like (moving all the way to the end of any available row, that is). Ahead is a backdrop behind a main stage, advertising all manner of ursine products to be picked up in the general store, with two stage boxes on either side, all draped with elegant red velvet curtains. Elegant wood and brass carvings above make the otherwise quaint theater in this small Western town seem grand. 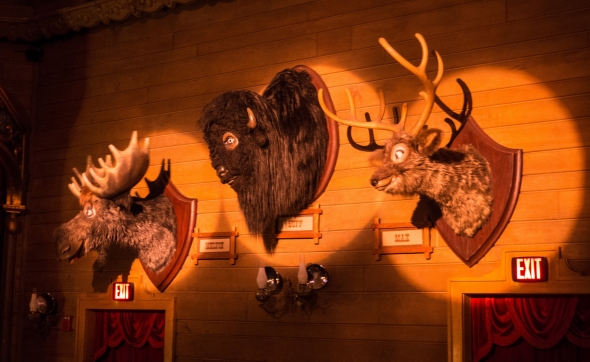 But glance to the right and you'll have no doubt that this is still the wild west: trophy heads mounted to the wall of a moose, a bison, and a deer. Strangely, they're labeled with names: Melvin, Buff, and Max, respectively. Then suddenly, the booming baritone voice of the bison whistles and calls out, "Hey, Henry! What's holdin' ya up? Let's get on with the show! We can't hang around here all day!"

The deer responds. "Now, Buff, be patient! Takes a little doin' to set these things up!" 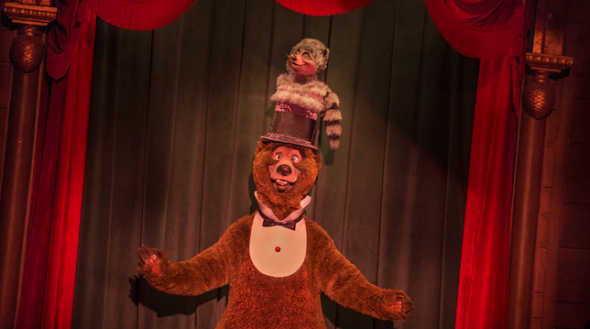 Now, the curtain on the box stage right has pulled away, revealing our master of ceremonies: Henry, the seven-foot tall brown bear with a raccoon cap.

"Okay, okay, boys, take it easy now, we're ready to start! Give me a little intro there, Gomer!" Center stage, a tall bear has arisen from below with his piano, a buzzing behive of honey atop. He begins to tickle the ivories with skill, beginning a jaunty bluegrass tune. "And now, I give you a sordid assortment of executioners of music and song..." The central curtain parts, revealing a quintet of instrumentalists playing banjo, harmonica, fiddle, and corn jug. "...the Five Bear Rugs!" 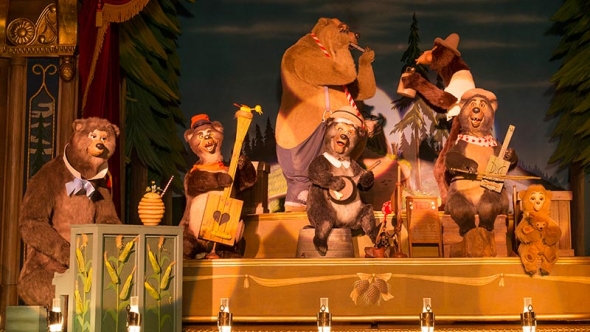 What follows is a good ol' fashioned country hoedown with no less than 24 Audio Animatronics entertainers, from ol' Liver Lips McGrowl and his cover of "My Woman Ain't Pretty (But She Don't Swear None)" to the beloved and wine-brandishing Trixie (a treat out of Tampa) with "Tears Will Be the Chaser For Your Wine." The sweet Sun Bonnets from the Sunshine State join with "All the Guys That Turn Me On Turn Me Down." 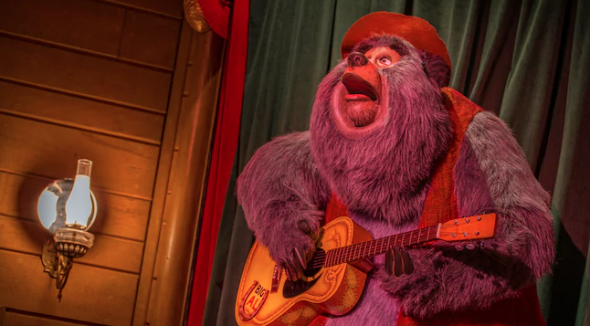 Of course, all of that pales in comparison to Big Al's timeless rendition of "Blood on the Saddle."

In a true show-stopping number, Teddi Berra descends on a sunflower swing for "Heart, We Did All That We Could" before the cast brings down the house with "Ole Slew Foot."

Naturally, the Country Bear Jamboree simply needs seen to be believed – or relived – which is why we happily present this point-of-view video of the wildest show in the wilderness.

Yet the story of the Country Bear Jamboree isn't over! On the last page, we'll watch as the Country Bears hit the road for a double feature performance in Florida... and explore the legacy of this swingin' Frontierland favorite. "California, here we come! Right back where we started from...!"