The 1964-65 New York World’s Fair had come to a close two months before, and as Walt Disney and his designers at WED Enterprises began to disassemble the Fair’s attractions, the announcement was made that Disney was moving forward with a new kind of entertainment offering: Disney’s Mineral King Ski Resort. 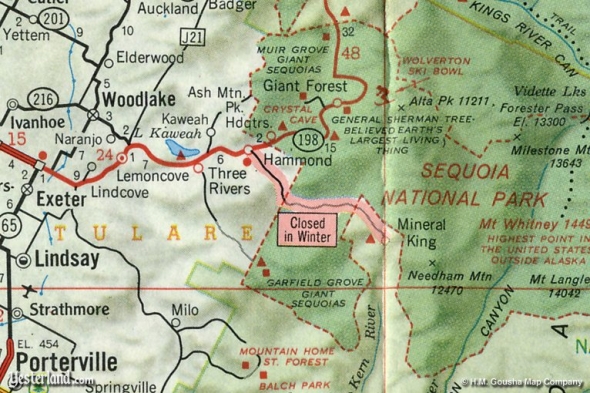 The Mineral King basin was – at the time – a part of the Sequoia National Forest in the Sierra Nevada Mountains in Central California, about three hours west of Fresno. However, Mineral King was otherwise surrounded in Sequoia National Park, under the federal jurisdiction via the US Department of the Interior. The beautiful forested valleys of Mineral King had been a contender for a ski resort for decades, but the only road in and out was narrow, only partially paved, and only available seasonally, as any snowfall made the route impassable.

Disney’s agreement with the U.S. Forest Service to develop Mineral King was vast. Disney would agree to build a $35 million resort available year round, attracting 2.5 million visitors annually for skiing, hiking, and eco-tourism. But, the 30-year permit they’d sign would require the government to approve a 25-mile, all-weather highway to access the resort… and it would need to pass through the National Park surrounding Mineral King.

Walt was quoted, “When I first saw Mineral King five years ago, I thought it was one of the most beautiful spots I had ever seen and we want to keep it that way.” 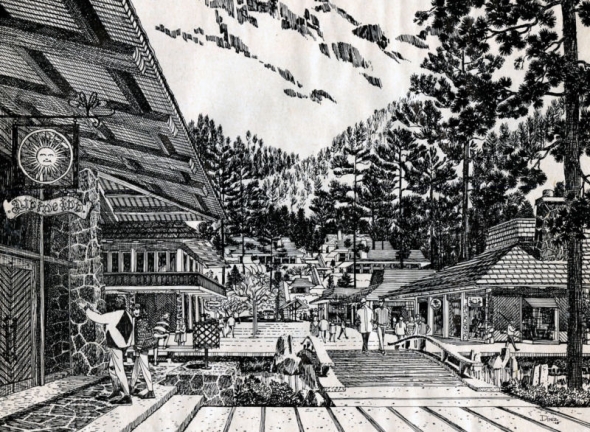 Walt’s plans called for a modern Alpine ski resort nestled into the delicate valleys of Mineral King – one that would set a new standard for winter sports resorts. The region had already been earmarked as a potential new world-renowned headquarters for downhill skiing, so Disney's bid to build on the property was a major coup.

Obtained from our friends at Yesterland (an essential source for further information on Mineral King), the Spring 1966 Disney News (the official publication of the Magic Kingdom Club) noted: 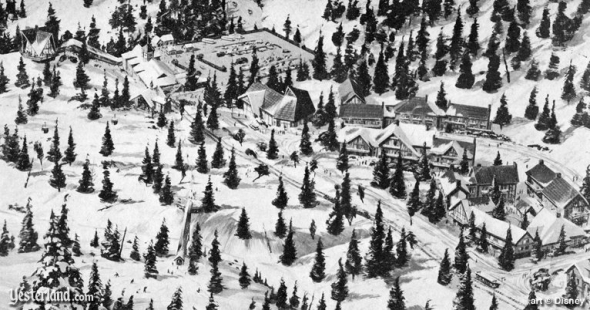 “Walt’s plan for the picturesque area, located about equidistant from Los Angeles and San Francisco, provides for year-round recreational activities by people of all ages and athletic abilities.

Fourteen ski lifts are anticipated, many serving guests throughout the year. Some of the lifts will be used in the warm months by sightseers, campers, hikers and wild-life students, who for the first time will be able to visit the 7,900-foot valley and its surrounding 12,400-foot mountains.

A completely self-contained village will accommodate visitors. It will have a chapel, ice-skating rink, convenience shops, restaurants, conference center, and low-cost lodging facilities. In addition to Mineral King Village and ski lifts, there will be a series of ten restaurants in the valley and atop surrounding peaks. There also will be two large hotels, a heliport and auxiliary facilities.

The company’s entire approach has been based on the absolute necessity to preserve the site’s natural beauty and alpine character. 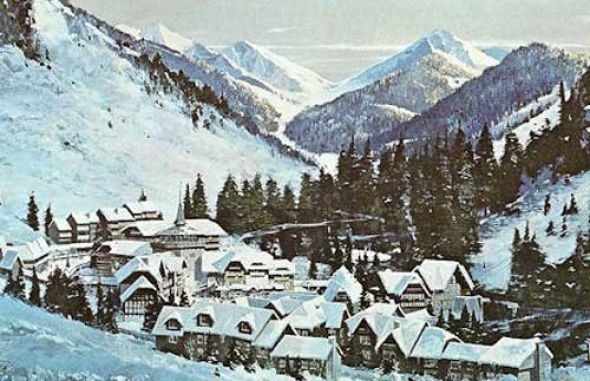 To this end, automobiles will be excluded from the valley proper. Guests will park in a 2,500-vehicle parking area at the entrance and will be taken into the valley by a high-capacity public conveyance.

Further, the area’s natural character will be preserved by camouflaging ski lifts, situating the village so that it will not be seen from the valley entrance, and putting service areas in a 60,000 square foot underground facility beneath the village.”

But for Disney Parks fans, one piece of Mineral King is the most memorable… the attraction Walt Disney had asked Marc Davis to produce to entertain visitors… Masterfully combining his character creating expertise, Davis concocted what may be the most unique show to ever be developed for Disney.

Walt knew he wanted a show to provide “Disney” style entertainment for guests staying the Mineral King Ski Resort. In Disneyland: The Nickel Tour by Bruce Howard and David Mumford, Marc recalled his instructions from Walt. ““Walt thought maybe we should have a show that had something to do with bears. Lots and lots of bears.”

Befitting his portfolio of anthropomorphic animals and character-infused singalong attractions, Marc took the project and at once began researching. He worked with fellow Disney animator Al Bertino to develop ideas about potential bear bands, including a marching band, a mariachi band, and a Dixieland band. 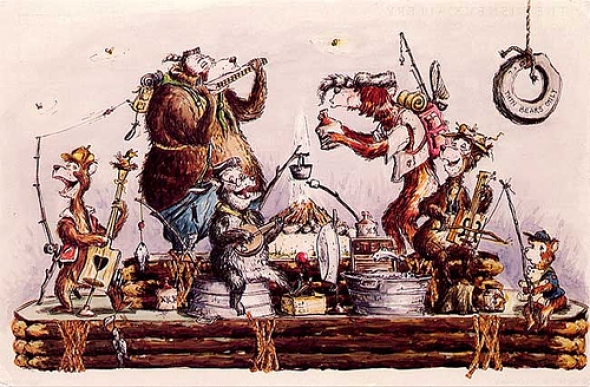 As the story goes, Walt walked into Marc’s office one day and saw drawings Marc and Al had developed of a country bear band and laughed, commenting that he loved the characters. That was also the day, some say, that Walt uncharacteristically said goodbye to Marc on the way out of the office. It was the last time Davis and Disney ever spoke.

Development of Mineral King would press forward. (It wouldn’t be removed from Disney’s docket until 1977, then from the realm of possibility in 1978 when Congress annexed the 16,200 acres of Mineral King to officially become part of Sequoia National Park, preserving it forever from commercial development.) 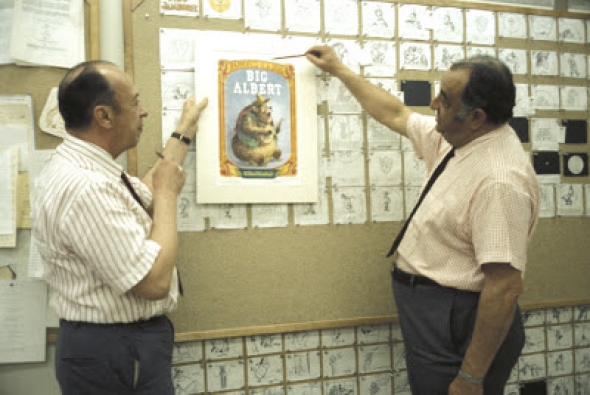 But the concept Marc Davis had developed for a wilderness bear band with country twang was too good to pass up… at once, it became a must-have for the under-construction “Disney World” being built in Florida.

Disney Legend and Imagineer X Atencio (lyricist behind the Haunted Mansion’s “Grim Grinning Ghosts,” Pirates of the Caribbean’s “Yo Ho [A Pirate’s Life for Me]”, and Magic Kingdom’s Tomorrowland Lost Legend: If You Had Wings) came on board and worked with famed Academy Award-winning composer George Burns to create songs for the bears to sing. (The story behind the music of Country Bear Jamboree was explored in-depth in a multi-piece series by the incomparable Passport to Dreams, whose scholarly and well-researched Disney World history pieces simply can't be bested.) 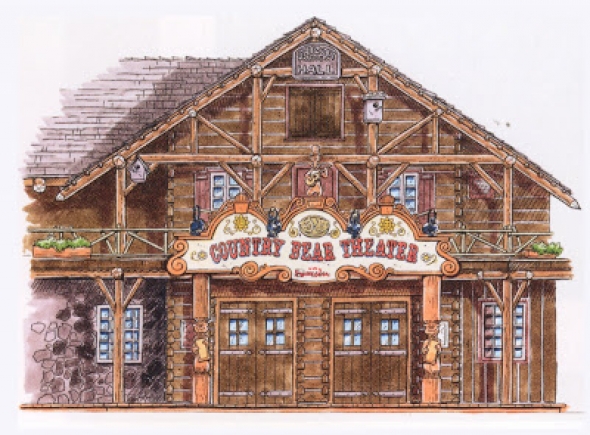 A purpose-built theater was constructed in Magic Kingdom’s Frontierland to house this new kind of musical revue; a larger-than-life, countrified version of the Enchanted Tiki Room of the decade before. The Country Bear Jamboree was one of the opening day attractions at Walt Disney World’s Magic Kingdom. Sponsored by Pepsi-Cola and Frito-Lay, the rootin’, tootin’, foot-stompin’ musical revue was an instant success among the offerings in the park’s Frontierland. And when Magic Kingdom opened, the Country Bear Jamboree required the most limited and expensive ride coupon, the E-Ticket, to see… And for good reason… Ready to head on in?