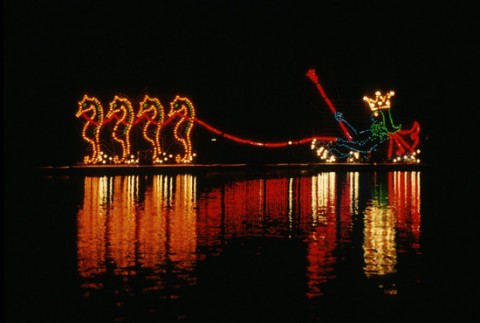 Later in the evening, you’re relaxing at your hotel room after a magical day at Walt Disney World. Suddenly, you hear a noise from outside, a tinny musical sound that captures your attention. You open the drapes and stare with wonder at the odd menagerie in front of you. It’s Disney’s naval tribute to guests. My wife lovingly calls the display the “noisy boats,” but you’re familiar with them by their real name. o 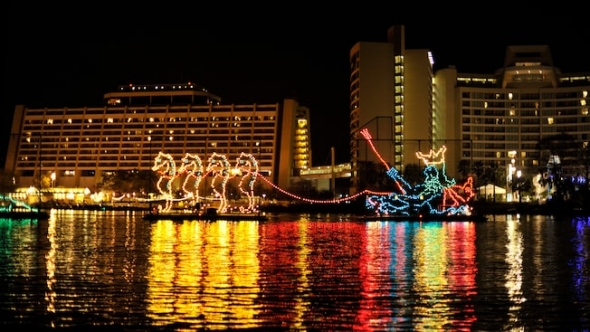 Image: DisneyWhen theme park tourists discuss the parade at Walt Disney World, the presumption is that the subject is Disney’s Main Street Electrical Parade. The nighttime parade is an illuminated marvel of Imagineering wizardry, one beloved by guests around the world. The first iteration of it was at Disneyland in 1972, but the most famous one is at Magic Kingdom, where it started in 1977.

These in-park parades weren’t the origin of the idea, though. The Electrical Water Pageant has a longer history than all of its successors. In fact, its genesis traces all the way back to the first month of Walt Disney World’s existence. Yes, it’s also as old as the park itself!

Guests at Disney’s Magic Kingdom resorts will see the noisy boats whether they want to or not. The show passes by Disney’s Wilderness Lodge, Disney’s Contemporary Resort, Disney’s Grand Floridian Resort & Spa, and Disney’s Polynesian Village Resort. Everyone else catches the show in the area around Magic Kingdom. Back in the 1970s, however, only the Polynesian and Contemporary were open. The waterfront exhibition had a limited audience during its first years. 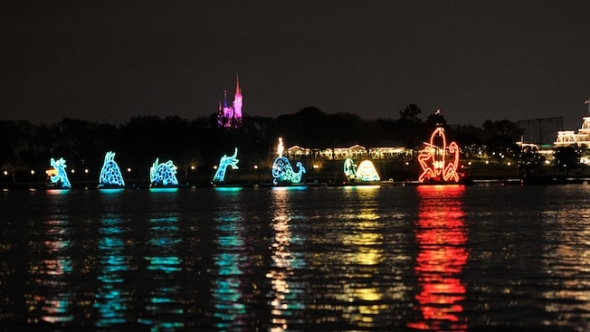 The most novel part of Dedication Day was a fleet of boats that glowed in the dark. These vessels set sail on Bay Lake and Seven Seas Lagoon, the most important bodies of water at Walt Disney World at the time. They looked like a homecoming parade on water, albeit with Christmas lights added to make them stand out in the night.

Disney sailed 15 boats that first night, 14 of which were from the Electrical Water Pageant fleet. A 15th boat wasn’t illuminated, but Disney needed it to shoot all the desired fireworks for Dedication Day. The rest of the fleet shot fireworks as well, giving the pageant hidden utility.

The first Electrical Water Pageant followed a performance by hula dancers from what we know as the Spirit of Aloha show at Disney’s Polynesian Village Resort. Technically, it was a dedication of the Polynesian Luau. Guests shuffled down the beach from the dancers to the water, where they had an optimal view of the illuminated vessels. 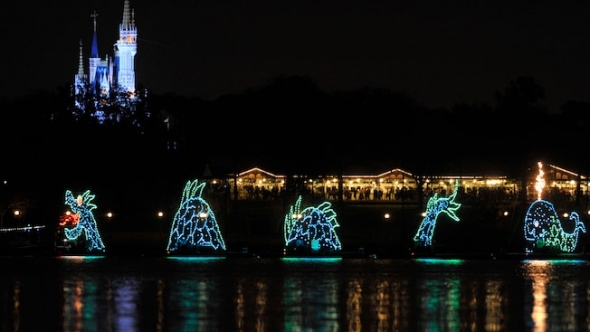 Other creatures in the first Electrical Water Pageant were a clamshell complete with mermaid joined by three red-haired mermaids in an accompanying boat and four seahorses. There was also an octopus, a whale, a pair of sea lions bouncing a ball, and King Neptune.

Over the next five years, Disney would remove or repurpose several of the original boats. They also added a turtle and some shrimp to the festivities. The lineup still included 14 visible boats, and some of the 1971 ones remained in the group. Disney also updated the octopus to make it more attention-grabbing. 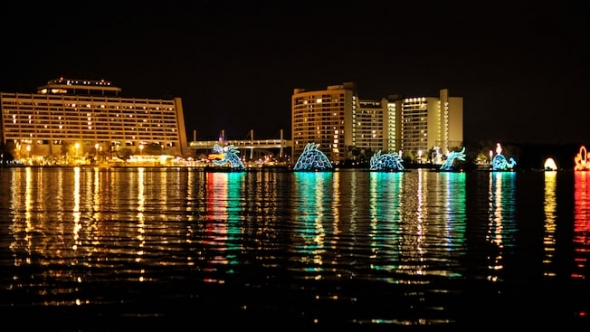 Image: DisneySince we’re discussing a pageant that’s more than 45 years old, Disney’s made plenty of other changes to its fleet over the years. The current iteration has remained relatively stable since 1996, though. The current lineup includes a sea serpent design spread across four boats, a brachiosaurus, a crocodile, an octopus, a turtle, and a whale. There are also three frolicking dolphins and seahorses. Still overseeing the parade is King Neptune, just as he has done since 1971.

When you look at these creatures, you’re seeing more than 50,000 light bulbs. The show is so demanding that Disney replaces hundreds of bulbs each week to keep the lights on. The 14 floats are actually two sets of seven connected barges. Each one is 40 feet long and has 25-foot tall walls that display the lights.