These 10 Disney Imagineers are Forever Immortalized with Disney's Highest Honor... 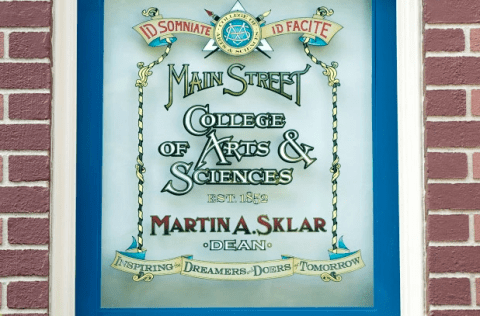 Ah, Main Street. An icon of Disney Parks the world over, the origin of this picturesque land is as timeless as the story of Disneyland itself: a dream-like, hazy recreation of Walt’s childhood hometown – Marceline, Missouri – right at the turn of the century. Of course, this sleepy downtown is passed through the idealized lens of a child’s vision, creating a romanticized, hazy version of the truth; a sort of “ease” into the fantasy and surrealism of the park’s literary lands.

And at once, Imagineering fans will begin to share details of the cinematic details that bring the land to life, like the use of forced perspective to make the streetscape appear taller than it is; the almost-imperceptible incline of the street at Magic Kingdom making the castle appear further away and taller that it truly is; the inevitable nods to Walt hidden throughout the land… 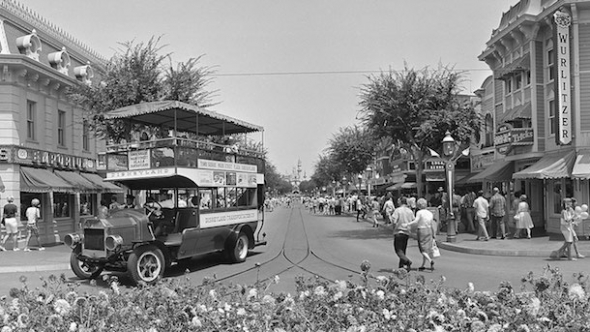 Yet of all the cinematic details that make Main Street such a favorite for trivia buffs, there’s one detail to outdo them all: the windows along Main Street, U.S.A.  Keeping with the unprecedented cinematic style of this new “theme park” venture, the imaginary shops set along the land’s second level are the park’s opening credits, listing the dreamers, thinkers, engineers, financiers, and figures who made (and continue to make) Disneyland a reality.

Exceeding even Disney Legend status, receiving a dedicated window along Main Street is the company’s highest honor, akin to being permanently written into the credits of those who have shaped Disney Parks. While this look at those fabled windows is hardly comprehensive, hopefully it provides a new way of looking at one of Disney Parks’ most fascinating lands. 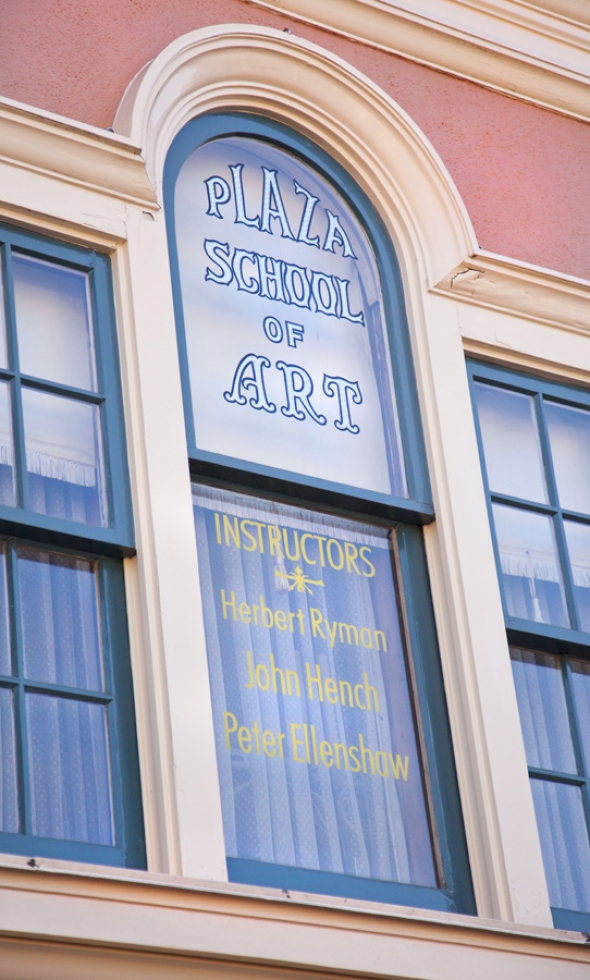 Any list of the shapers of Disney Parks has to begin with Herb Ryman, who – after Walt himself – is perhaps most directly responsible for the Disneyland we know today. As the story goes, when Walt found out that his brother Roy was headed to New York to pitch the concept of Disneyland to potential backers, he called Herb into his office. Walt explained to Herb that bankers have no imagination, and that he was going to send along a piece of artwork to convey just what this “Disneyland” was really going to be.

Herb apparently said it was wonderful idea and asked to see the artwork, to which Walt replied, “You’re going to draw it.” 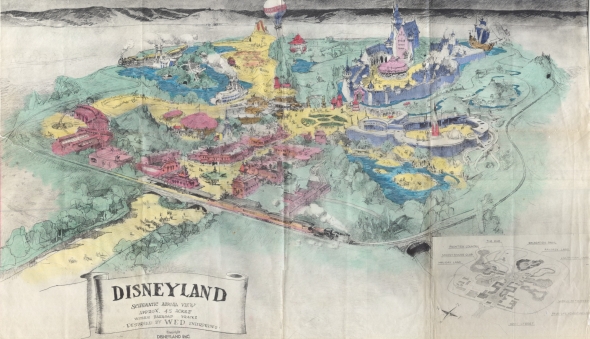 The pair worked for two days straight in what’s called "the lost weekend,” as Herb used a small carbon pencil to design the park as Walt meticulously described each square foot, angle, courtyard, and pathway. The resulting image (which sold at auction in 2017 for $700,000) literally became the basis of the Disneyland we know today, originating the Main Street concept as part of the "hub and spokes" layout and cementing the park's opening lands of frontier, adventure, fantasy, and tomorrow.

Naturally, Herb’s window on Main Street lists him among the Instructors of the Plaza School of Art (alongside the incomparable John Hench and Peter Ellenshaw, each a beloved Disney Legend in his own right, worthy of in-depth exploration in a continuation of this feature). 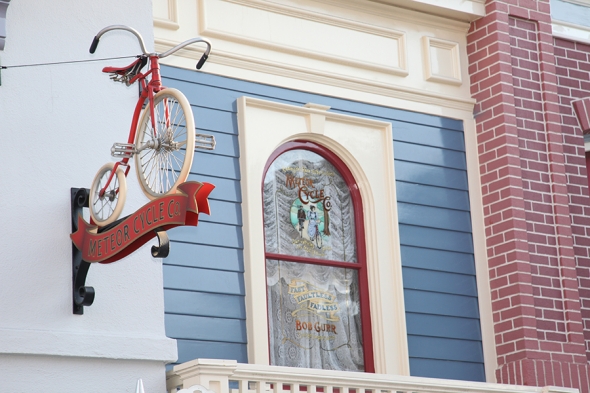 “If it moves on wheels at Disneyland, I probably designed it.” Bob Gurr – self-titled “Director of Special Vehicle Development” was indeed responsible for the style of many of Disneyland’s vehicles, including the Autopia cars, the Matterhorn Bobsleds, the iconic shape of the Monorail, the “horseless carriages” along Main Street, the unforgettable “Doom Buggies” in the Haunted Mansion, and even the celebrated parking lot trams (which Disney literally sells toy versions of). 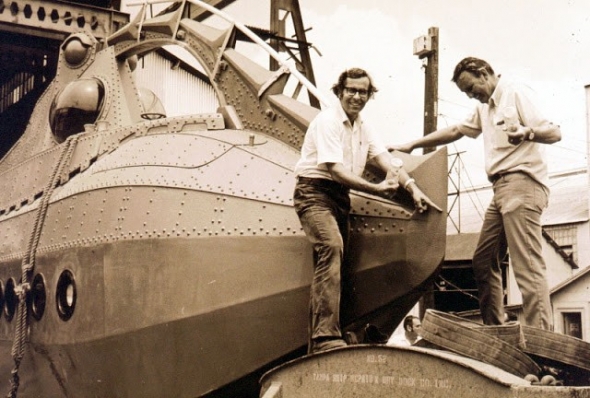 Bob was behind the ride vehicle assembly for Magic Kingdom's 20,000 Leagues submarines (based on Harper Goff's version from the 1954 film), the Flying Saucers in Tomorrowland, the Ford Magic Skyway that debuted at the 1964 – 65 New York World’s Fair (which was relocated to Disneyland as a Lost Legend: The Peoplemover), and the Fair’s Audio Animatronic Abraham Lincoln (which stands proudly among our Countdown: 25 Best Animatronics on Earth).

Gurr retired from Disney in 1981 and created his own engineering firm, Sequoia Creative, Inc., and thus has a remarkable place in the industry outside of Disney, as well, including creating the Audio Animatronic beast that ravages the Studio Tour in Universal Studios’ Lost Legend: King Kong Encounter and the starring T-Rex in the film Jurassic Park.

It’s no surprise that – befitting his vehicular history – Gurr is listed as the proprietor of the Meteor Cycle Co. – “Our vehicles past the test of time… Fast, Faultless, and Fadless.” 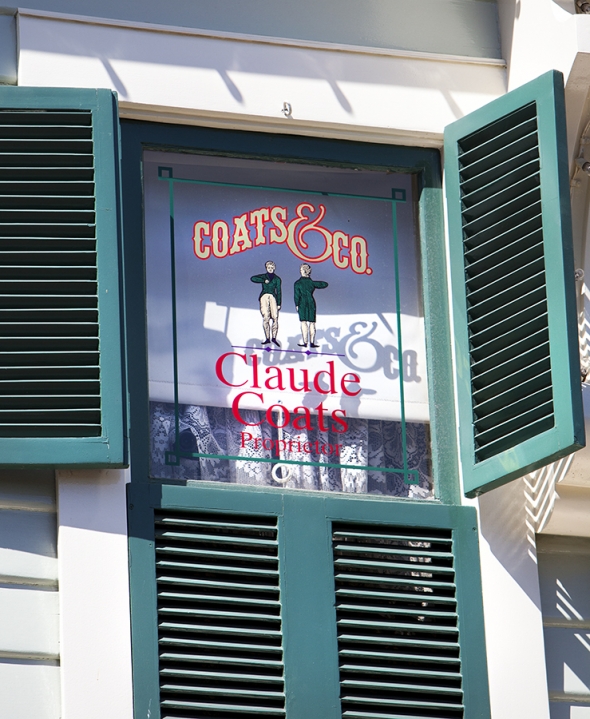 Claude Coats was one of the biggest figures at Disney during Walt’s time… literally. Standing 6’6”, Walt jokingly denied Coats access to the Stagecoach ride being tested at the studio, claiming he “spoiled the scale!”

The truth is, Coats had been part of Disney since its early years, creating the signature watercolor backgrounds of Disney’s earliest animated films like Snow White and the Seven Dwarfs, Pinocchio, Melody Time, Song of the South, The Adventures of Ichabod and Mr. Toad, Cinderella, Peter Pan, and Lady and the Tramp. 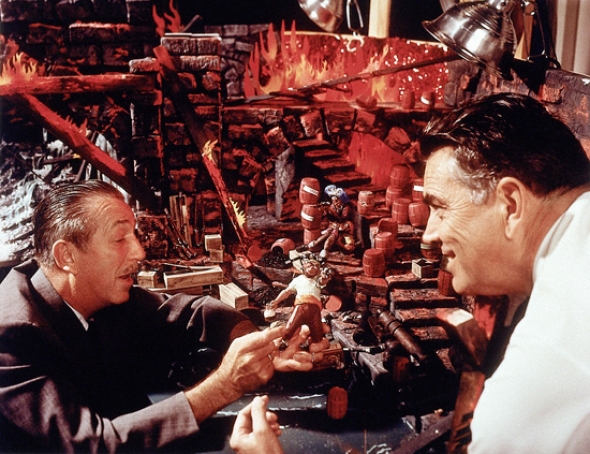 In the 1950s, Coats became one of the leading figures in the design of Disneyland’s attractions, from Mr. Toad’s Wild Ride and Snow White’s Scary Adventures to Submarine Voyage. Coats is perhaps best known for his role in developing the moody, atmospheric, lingering halves of Pirates of the Caribbean and Haunted Mansion (with an Imagineer later on this list shaping the more playful, sing-along halves of each), but he also shaped those World’s Fair attractions from 1964.

Coats was also a driving force behind the storied, epic, massively-scaled dark rides that debuted at EPCOT Center – Lost Legends: Universe of Energy, World of Motion, and Horizons.

Disney Legend Marty Sklar later recalled, “Claude paved the way in turning sketches and paintings into three-dimensional adventures. His energy, curiosity, and drive to create new experiences for our Disney park guests made him a leader and a teacher for all of us. He was a genuine one-of-a-kind.”