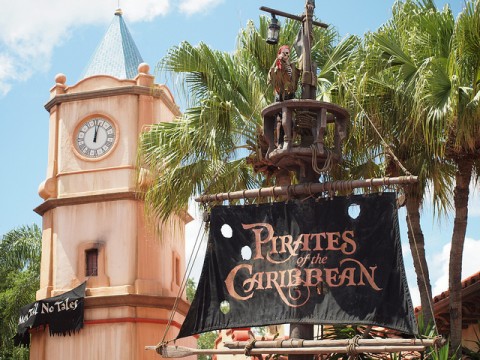 Did you know that the Tower of Terror in Tokyo DisneySea features an African god enacting his revenge on a disrespectful hotel owner? Or that three not-so-innocent bears lurk in the gold mines of Big Grizzly Mountain Runaway Mine Cars, waiting to play a little mischief on the next unsuspecting tourist? What about the Phantom Manor, which houses a vicious ghost that has placed an irreversible curse on a young bride?

The Disney Parks are best-known for their ability to bring beloved animated classics to life, but some of their most innovative and captivating attractions are true Disney originals – that is, never-before-seen story-based attractions that have been concocted by Imagineers over the years. Here are six of the best, weirdest and most imaginative attractions you'll find in a Disney Park today. 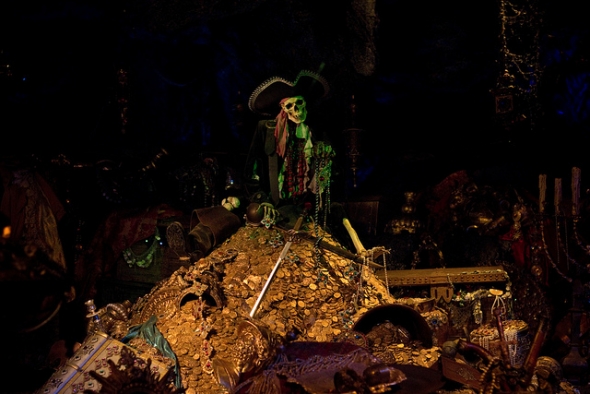 Pirates of the Caribbean is one of those unforgettable classics that also happens to be one of the first truly original Disney Parks attractions. Notably, it was also one of the last that felt the direct influence of Walt Disney, who passed away just a year before the attraction was unveiled to the public in 1967.

That’s right — the Audio Animatronic-filled Pirates of the Caribbean predates Disney’s 2003 nautical thriller, Pirates of the Caribbean: The Curse of the Black Pearl, by 36 years. Although the attraction spawned a hugely successful five-film franchise, it was totally unfamiliar to the first passengers it ferried through its damp caverns and burning towns back in the late 1960s.

The plot of the ride follows a crew of skeleton pirates, who are shown cavorting among their spoils, playing chess, guzzling down bottles of wine, and steering ships through massive ocean storms. As riders move from one tableau to the next, they watch the pirates rush to meet their fateful doom: first, firing on the soldiers manning the fort on Isla Tesoro, then plundering the town’s houses, livestock and unwed brides, and finally setting fire to the whole city of Puerto Dorado. Even without the context the film provides — namely, a curse that allows the pirates to lead double lives as flesh-and-blood men by day and skeletal beings by night — we get the gist of the ride: the pirates will eventually discover their pillaging, looting and debauchery has all been for naught.

While the plot itself is unique to Disney, so too is the construction of the ride. According to Disney historian Chris Strodder, Pirates of the Caribbean incorporates over 75 human Audio-Animatronic figures and over 50 animatronic animals, including dogs, cats, pigs and chickens. No current Disney Parks attraction features more Audio-Animatronics in a single setting, and even without the engaging plot, incredibly life-like scenery and catchy music, that alone would make this an original ride well worth your time. 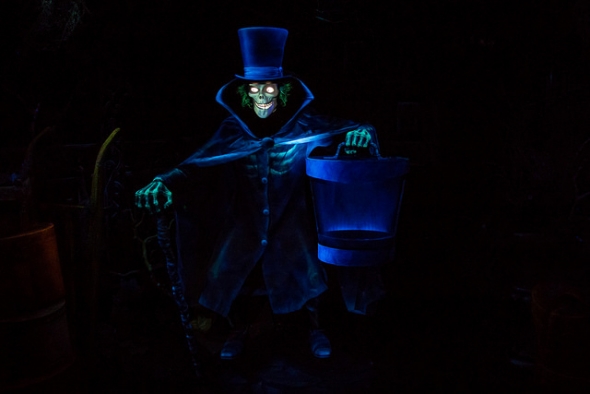 It’s hard to imagine anyone wanting to base an attraction on the goofy 2003 box office bomb The Haunted Mansion, starring Eddie Murphy and the head of Jennifer Tilly (as Madame Leota), but thankfully, this is one Disney Parks classic that blossomed all on its own.

While the stately white mansion had been hyped since 1961, Disney’s Imagineers didn’t open its haunted chambers and corridors to the public until 1969. In that eight-year period, there was a lot of internal debate about what a Disneyfied haunted mansion should look like. Should it feature the tattered curtains and peeled-paint exteriors of common haunted houses found at state fairs and seaside boardwalks? (Walt Disney quickly nixed that idea.) Should it actually try to scare guests? Should guests be permitted to walk through the entire attraction, potentially clogging the hallways if they wanted to gawk at a particular gag or became too frightened to move on?

In the end, the Imagineers settled on something a little more practical… and subtle. The ride would transport guests via an “enchanted” elevator, then load them onto Omnimover “doom buggies” as they moved from haunted room to haunted room. Visual gags would be plentiful, from the ghostlike ballroom dancers to the marble statues that appeared to track a guest’s movements by turning their heads. Other than a few mild “pop-up” ghosts lurking behind tombstones, there would be no true scares — nothing that children over a certain age wouldn’t be able to handle with ease.

Although the ride erred on the side of humor, rather than horror, Disney’s Imagineers brewed a chilling backstory for the attraction in 2006. As guests move through the mansion, they’re eventually brought up to the attic and treated to the spectacle of a lonely ghost bride named Constance Hatchaway. Portraits of Constance’s five former husbands can be spotted throughout the attic, but something’s a little off about each of them — perhaps in the way that their heads continually disappear and reappear. Constance’s ghostly apparition awaits the guests as they approach the attic window, and she doesn’t seem happy to see them. The observant visitor might guess that the ghost bride has murdered her wealthy fiancés in order to steal their fortunes, and unfortunately, they’re her next victim. She wields a hatchet and chants creepy wedding vows as guests “fall” out of the window to the graveyard below, now one of the specters that haunts the property. 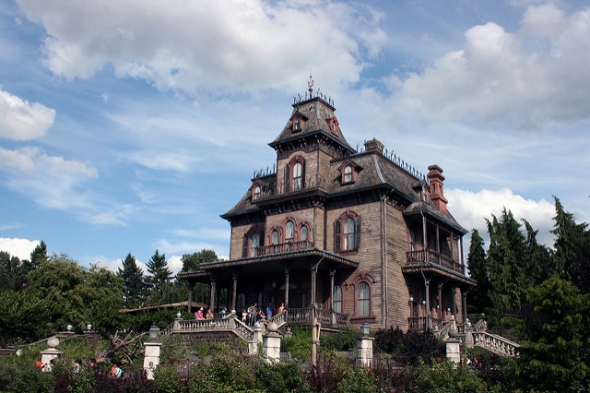 The “ghost bride narrative” is one that can be found throughout each of Disney’s five haunted mansions, but each park has put their own creative twist on the tale. The darkest iteration of the attraction can be found over in Disneyland Paris, where Phantom Manor has been placed within Frontierland (unlike its placement in other parks: Disneyland’s New Orleans Square, Walt Disney World’s Liberty Square, Tokyo Disneyland’s Fantasyland and Hong Kong Disneyland’s Mystic Point). Here, a young miner’s daughter named Melanie Ravenswood plays the part of the bride, except she’s hardly the gold-digging assassin of Disneyland’s mansion. Instead, it’s an unseen phantom that lures Melanie’s groom to his death and traps Melanie within the manor for eternity of torment. Though Phantom Manor’s tricks and gags aren’t any more frightening than those found in the other four mansions, its dastardly backstory sets it apart as one of the darkest attractions in Disney Parks history to date… and one that thankfully hasn’t gotten the cinematic treatment just yet.