No, it’s not Avatar: Flight of Passage…

Disney has set the bar higher than ever before with their upcoming line-up of attractions. While Disney still has plenty of plans for classic dark rides beloved by children, the opening of Pandora: The World of Avatar, has made a dramatic shift in commitment to immersive attractions that place guests in the center of their favorite adventures. Most exciting among these have been Disney’s ambitious plans for Star Wars Land.

The parameters that make a favorite attraction vary from guest to guest. For some, it’s roller coasters or bust while others prefer dark rides that inspire childhood wonder. For many who visited Walt Disney World the past year, the clear winner might be Avatar: Flight of Passage, which is arguably the most immersive attraction Disney has ever built.

We recently explored how Disney’s incredible plans for Star Wars: Galaxy’s Edge bear striking similarities to something like a living video game. Guests don’t just want to be spectators of their favorite stories. They want to interact with the space, such as you can on Buzz Lightyear’s Space Ranger Spin or Toy Story Mania. They want their actions to matter, meaning a clear shift in theme from tours to quests. In Star Wars: Galaxy’s Edge, guest’s actions on the land’s flagship attractions will affect your experience in the park that day. In one of these, guests will actually enter a full replica of the interior of the Millennium Falcon, very purposefully designed to not feel like a queue leading to an obvious simulator. The plan is to make it feel as much as possible like you are on the Millennium Falcon itself and its time to fly. 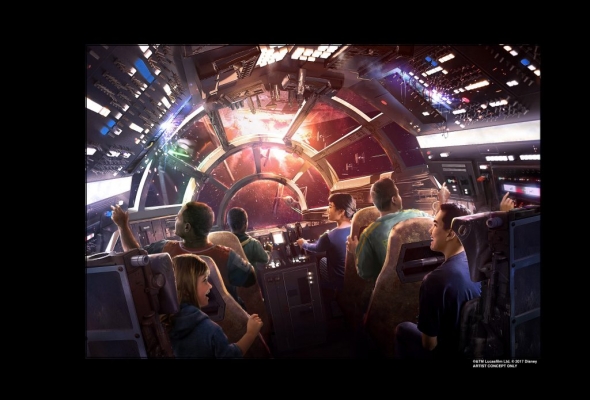 Now, don’t get us wrong. Avatar: Flight of Passage is an incredible attraction, but it is still ultimately a very elaborate tour of Pandora on the back of a magnificent banshee. It is extremely cool, but it is nowhere near the bar of immersion Disney is suggesting for Star Wars: Galaxy’s Edge and its attached resort.

What if we were to tell you though that Walt Disney World has already debuted an attraction that does set that bar for immersion as high as Disney has suggested—an attraction where guests become the star characters in an epic quest so intense that you might just forget it’s not real?

The funny thing is most guests have never heard of it… and you don’t even need a park admission to access it.

Star Wars: Secrets of the Empire debuted quietly at Disney Springs this past December to a forgotten corner of the Marketplace. Through the unassuming doors of a building simply marked “The Void” waits what might be the best attraction at Walt Disney World—and it is an absolute game changer.

I will admit, despite being an avid Star Wars geek, I wasn’t particularly excited when I heard about Star Wars: Secrets of the Empire. Described as a “full sensory, immersive experience” that uses “real-time hyper-reality that combines interactive sets, real-time effects and amazing technology”, it sounded suspiciously to me like an attempt to rebrand Disney Quest into a single attraction. With Disney’s insatiable climate for upcharge experiences, it felt like a cash grab (tickets are $29.95 for ages 10 and up only), and I had overall low expectations. Disney has experimented with virtual reality for nearly thirty years, and their results haven’t always been necessarily thrilling. I remember as a kid having the opportunity to join a focus group to test drive the Magic Carpet Ride VR experience that ultimately became part of Disney Quest. It was a blast but didn’t necessarily “feel” like reality—just like a normal video game with a big helmet for a screen.

Wow, how times have changed.

Virtual reality has really come into its own the past five years in terms of finally feeling like reality. However, the catch is that even the coolest virtual reality experiences still operate a bit like an Xbox Kinect—you can flail your arms or a prop sword, but if you attempt to run after an enemy or leap off a high tower Assassin’s Creed style, you’re going to end up destroying your living room. The minute you try to actually touch something or you don’t feel wind on your face amid a storm, the illusion is broken.

Disney partnered with the hyper-reality experts at The Void to craft an experience that overcomes these immersion-breakers, designing an attraction that places you smack into the middle of a quest to secure crucial intelligence for the Rebellion. You aren’t just a guest watching familiar Star Wars characters engage in the action—you are the main characters, and the fate of the mission rests on your shoulders. Using a combination of a giant (and according to the cast members, “very ugly”) maze, carefully placed props, and physical stimuli like rushing wind and rumbling floors, Disney found a way to place you inside the Star Wars universe in a way that feels stunningly real.