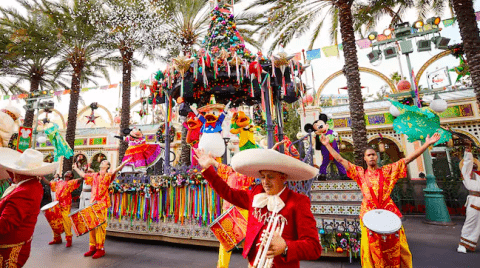 This time of year, it’s hard to miss the Christmas mania that sweeps through most theme parks. On Disneyland’s Main Street, U.S.A., the 60-foot Christmas tree is assembled well before Thanksgiving, and Santa’s full-belly laugh reverberates off of the equally-jolly facade of It’s a Small World Holiday when A Christmas Fantasy Parade starts their twice-daily performances. Over at Universal Studios Orlando, you might catch The Magic of Christmas at Hogwarts as it envelops the castle in a full-scale projection while The Grinchmas Who-liday brings its green and red splendor to Seuss Landing. The list goes on… and on and on.

Even if guests choose not to partake in any Christmas-centered festivities, they’re given little respite from the over-the-top atmosphere of holiday cheer: wreaths, garlands, twinkle lights, candy canes and Christmas carols included. For those who celebrate Christmas every year, wintertime at a theme park can be downright magical, if a bit overwhelming at times. For those who celebrate Hanukkah, Kwanzaa, Diwali, Three Kings Day or simply choose to abstain from secular and religious observations altogether, the full-blown holiday bonanza can feel more than a little alienating. 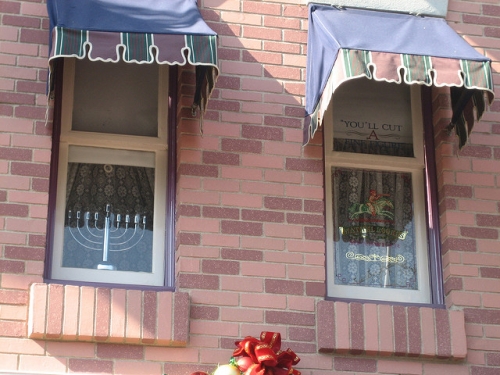 While you might not be able to spot more than a single menorah on Main Street (let alone a kinara), there are still a few theme parks that have started to make strides toward more inclusive holiday traditions. Below is just a sampling; note that we have not detailed the various celebrations at nearby hotels and shopping districts, as those are not always as widely advertised or easily accessible to the public. 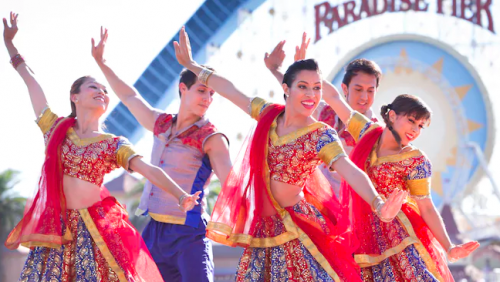 The sister park to Anaheim’s iconic Disneyland, Disney California Adventure blends traditions and culinary concoctions from a variety of holidays. The specific lands to pay attention to are the backside of Paradise Pier, near Goofy’s Sky School and The Little Mermaid - Ariel’s Undersea Adventure, as well as the wide pathway that runs from Buena Vista Street to the entrance of Paradise Pier, where you’ll find a dozen food and beverage kiosks that comprise the annual Festive Foods Marketplace.Dates: November 10, 2017 - January 7, 2018

Hanukkah: The first sign of Hanukkah at Disney California Adventure is the menorah in the window of Julius Katz & Sons, the home goods shop on the right-side of Buena Vista Street, where you can also peruse a limited range of Hanukkah-themed housewares and souvenirs for sale. The second? Try the fruit and nut rugelach at Blissfully Braised, one of the food kiosks in the Festive Foods Marketplace, or visit A Twist on Tradition for a Reuben potato smash and rye toast crumble and Grandma’s Recipes for beef brisket and sugared carrots (sadly, there’s not a latke in sight here). Entertainment offerings are scarce, but the Yiddish klezmer band Mostly Kosher can often be heard along Paradise Park.

Kwanzaa: Even fewer items are on the menu for Kwanzaa, ranging from Nashville fried hot turkey and pickles at Spicy Celebrations to cornbread macaroni and cheese at Holiday Duets and sweet potato pie at Grandma’s Recipes. As part of their rotating musical offerings, Paradise Park is also home to The Sound, an a cappella group that combines classic Christmas and Kwanzaa songs. 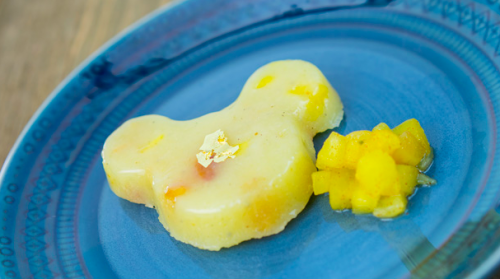 Diwali: Diwali may have officially ended in October, but you can enjoy traditional foods at the Festive Foods Marketplace until January 7. Classic Crocks and Casseroles offers chana masala with grilled garlic naan and A Twist on Tradition presents butternut squash and almond pakora fritters, both of which pair well with the much-sweeter pineapple kesari found at Festive Holiday Extras. Not only can guests enjoy Diwali music from the Blue13 Dance Company, but they’re invited to take part in a Bollywood-style dance party in Paradise Park. 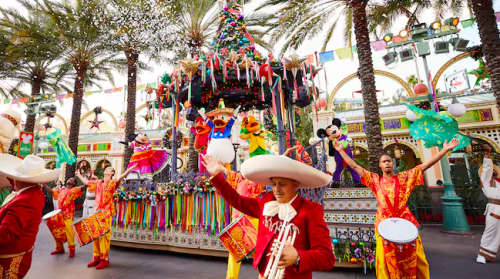 That’s about it for non-Christmas celebrations at Disney California Adventure. The holiday variation of World of Color — aptly named World of Color - Season of Light — spotlights Christmas more than any other holiday, even with the token renditions of “Feliz Navidad” and “Mele Kalikimaka” thrown in. And, while the variety in scrumptious holiday treats is surely appreciated, there are precious few decorations or events to suggest that the park is decked out for anything but Christmas. Only when you start to make your way to the back of the park does its holiday diversity become more apparent.