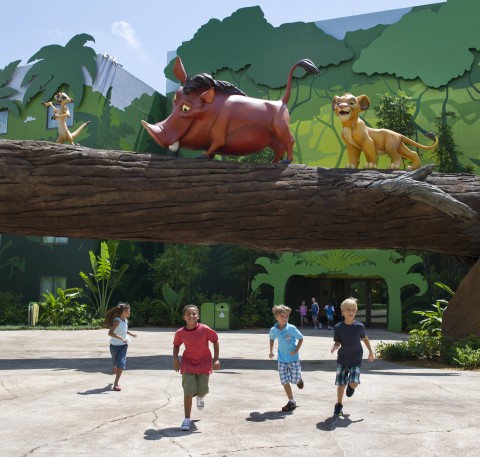 It is very easy to write off Walt Disney World’s Value Resorts—Pop Century, The Art of Animation, and Disney’s All-Star Music, Movies, and Sports Resorts. After all, for most families who don’t want to splurge on Disney’s Moderate accommodations or Vacation Club rentals, isn’t it just a better value to stay somewhere off-site?

Guests who have never stayed at Disney’s Value Resorts may be surprised to learn that there are some distinct advantages to the Most Magical Place on Earth’s most affordable accommodations. Particularly if you are travelling with kids, want convenience without frills, or are visiting Walt Disney World last minute, these resorts can prove unexpectedly amazing!

1. You can’t beat the price (on property) 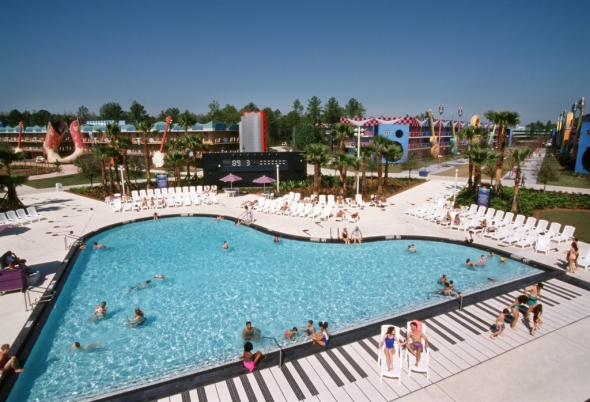 It’s no surprise that the best deals you will find on Walt Disney World property (other than camping at Fort Wilderness) are found at Disney’s Value Resorts. On any given day, the prices at Disney’s All-Star resorts (particularly All-Star Sports) run the cheapest, followed by Pop Century and The Art of Animation. In general, prices range between $95 to $200 depending on the season, with some opportunity for discounts for Florida residents and Annual Passholders. Even for guests who manage to increase their resort value by staying at Port Orleans, the Swan and Dolphin, or renting Disney Vacation Club points, you still cannot beat that price of the value resorts for an on-property resort in most cases.

While you can definitely find a decent room in Orlando for that price, what you lose is access to the benefits of staying on Walt Disney World property. Guests staying at Disney’s Value Resorts get the convenience of Walt Disney World transportation, Extra Magic Hours in the parks, early access to Fastpass+, the option to choose a Disney Dining Plan, free self-parking (which even the Swan and Dolphin doesn’t have!), and most importantly, convenience after a long, sweaty day in the Florida sun.

For guests visiting on a limited budget, the money you save by staying at Disney Value Resorts can go towards dining, souvenirs, and every other aspect of your trip. Particularly if it is more important for you to have the freedom to splurge in other areas, the sacrifice of a no-frills room is well worth the exchange. 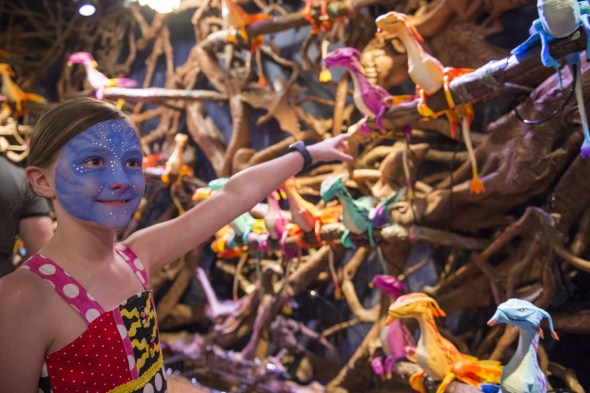 Before our first stay at a Walt Disney World Value Resort, we assumed the biggest sacrifice we’d be making was convenience. After all, Disney’s Value Resorts only offer transportation by bus.

We discovered that Disney’s Value Resorts offer surprisingly good proximity to the parks. Indeed, if you are planning to visit The World of Pandora at Disney’s Animal Kingdom, no resort besides Animal Kingdom Lodge is closer than the All-Star Resorts. A commute that normally takes a hefty amount of time from the Epcot or Magic Kingdom resorts passes in a flash taking the bus from All-Stars. In similar form, Pop Century and The Art of Animation are very close to Disney’s Hollywood Studios and Epcot.

The only resort that remains conspicuously far from the Value Resorts is Magic Kingdom, but that can be said of any of the non-Magic Kingdom resorts. If you plan to spend a substantial amount of time at the other three parks—especially if you are a passholder (meaning free parking) visiting with a car—the convenience of Walt Disney’s Value resorts cannot be understated.

3. The rooms are comfy and clean 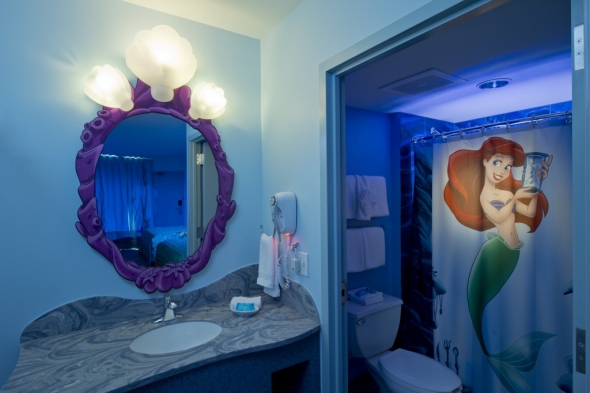 Apart from The Art of Animation Resort’s spectacularly-themed rooms (more on that later), Walt Disney World’s Value Resorts guest rooms definitely do not offer much in the way of frills. You get the expected essentials: clean beds with tight sheets (heavy blankets aren’t needed in the Florida humidity), a nightstand, a table and chairs, a dresser and television, a mini-fridge, free Wi-Fi, and a basic bathroom. Decorations are kept to a minimum, and because the doors at these resorts open to the outside, it’s difficult to get much light from the windows due to the awnings above.

However, if all you want is a clean place to sleep with the perks of a Walt Disney World resort (as well as the knowledge that your hotel is managed by a company with one of the highest reputations for guest service in the world), the value resorts get the job done. The rooms are kept up to snuff with Disney’s reliable standard for excellence (and don’t be shy calling Guest Services if something isn’t), which is perfect for any visitor who isn’t interested in the puffery and frills of Disney’s other resorts but does want the assurance that they won’t be crashing in a bed bug nest.

If an interesting room is a high point for you, Disney's Art of Animation Resort has some of the coolest theming in their rooms of any Disney accommodations. Speaking of which… 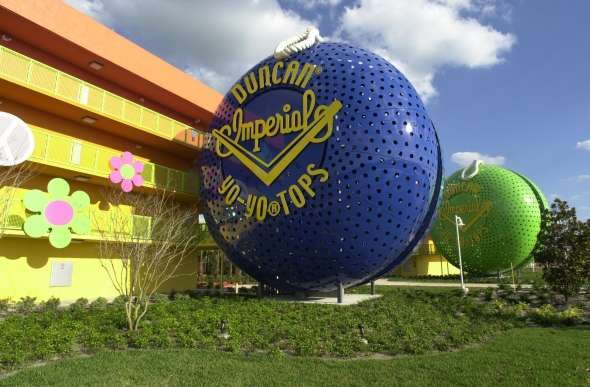 The level of theming at Disney’s Value Resorts is off the charts. Disney very easily could have just installed their own version of Motel 6 and called it a day. Instead, they made five of the most larger-than-life, vibrantly-themed resorts in their entire collection.

All Disney’s Value Resorts feature stunning theming to leave any kid gawking. There’s a certain Toy Story feel to the resorts, as if you’ve been shrunk to the size of an action figure in a kid’s playroom. Each wing has its own gigantic theme elements, giving the value resorts a distinct sense of fun compared to the moderate and deluxe resorts. They’re the type of resorts where you can just cut back and enjoy some utterly ostentatious Disney magic. Oh, and as for those rooms at The Art of Animation Resort? They’re some of the most bonkers fun rooms you can get a Disney World without splurging on a Pirate’s suite at the Caribbean Beach Resort.

Even if you aren’t into the theme of a certain resort, Disney does an admirable job appealing to a wide range of interests. I have very little interest in sports, but I still found myself taken in by the groovy surfing section of Disney’s All-Star Sports resort. The bottom line is that Disney managed to take value accommodations and inject a crazy level of fun. This gives the value resorts one advantage that trumps all others. 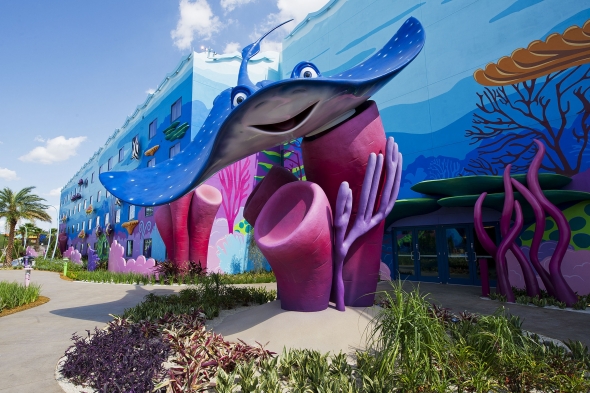 I was a kid when Disney announced the opening of the All-Star Sports, Music, and Movie resorts. I had no concept of the difference between a deluxe, moderate, or value resort. All I knew was that these new resorts looked so insanely cool. I repeatedly asked my parents why we weren’t staying there when we visited Walt Disney World.

While Disney makes sure kids can have a grand time at any of their resorts, the Disney Value Resorts seem to be designed with them in mind above any other audience. Adults may appreciate the classic elegance of the Yacht and Beach Club, the sharp trendiness of the Contemporary, or the rustic charm of Port Orleans, but many kids couldn’t care less.

For kids, Disney is a living dreamscape, and Disney’s Value Resorts take this to wacky levels. For kids, there’s real magic to a hotel populated by giant football helmets and guitars. Their imagination is captured seeing their favorite characters staging a full-on invasion. The theming of Disney’s Value Resorts is so wonderfully kid-centered that many younger kids might enjoy these resorts more than their swankier counterparts. 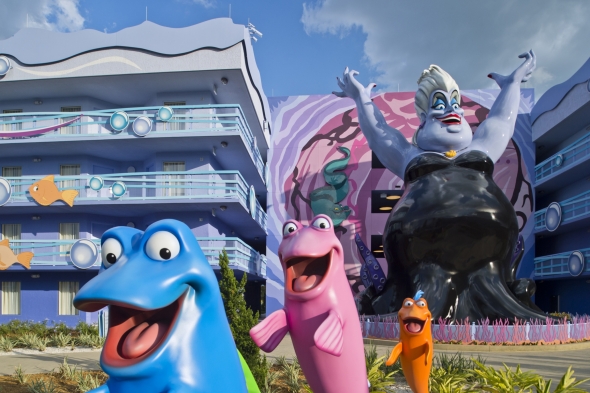 Oh, and the value resorts also have tons of stuff for kids to do. They have great pool areas, as well as scattered recreational activities. Each one also has a game room and a huge cafeteria for loading up on kid-friendly snacks. Oh, and the room service menu has pizza. What kid could ask for more?

Have you stayed at one of Disney’s Value Resorts? What was your experience?