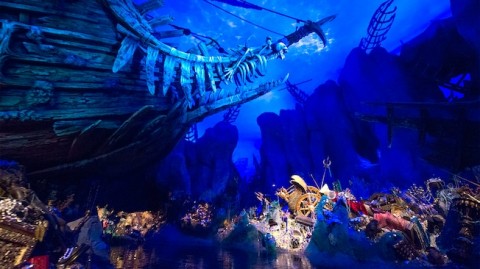 The Walt Disney Company invented the dark ride. The reason why they did is simple. Walt Disney and his team created movies prior to their constructing the Happiest Place on Earth. The easiest way for them to visualize a theme park attraction was to think of terms of filmmaking. That’s with a movie set and lighting that highlights the corresponding action.

Many of the attractions that you love are nothing more than a series of five or six movie sets. And a ride vehicle transports you to the right place at the right time so that you can enjoy the show. It’s a masterful ride design that works so well that every major competitor in the theme park industry has copied the idea for their own attractions…but nobody does it like Uncle Walt’s crew. Here are the nine best Disney dark rides in existence today!

Perhaps no title on this list better exemplifies the dark ride that Peter Pan’s Flight. That’s probably because it was one of the first dark rides. An opening day attraction at Disneyland, Peter Pan’s Flight has stood the test of time due to its brilliant ride mechanic. It sweeps guests into the air and allows them to feel as if they’re flying through the London sky, just like Peter Pan. And the ride truly takes place in the dark, which is a clever way that Disney can highlight the vivid colors of the scenes from the Peter Pan story.

There may be some author bias here; then again, it’s the author’s favorite ride at any Disney theme park, so I tried to act reasonably with my evaluation. Spaceship Earth is a ride through history as well as an educated guess about the future. The centerpiece attraction hosted inside Epcot’s central architectural structure (aka the wienie), Spaceship Earth is shamelessly informational, but it doesn’t fall into the trap of some previous Epcot edutainment.

The set pieces are all beautifully detailed, and the projection scenes are breathtaking. While the world of tomorrow stuff is silly, I’m still always disappointed when it’s not working. Spaceship Earth is everything that’s great about Epcot.

David, I usually like your articles very much, but not this one. Please leave the negativity about the rides you don't like aside. I was really looking forward to your discussion about the tower of terror, and got a rant about the Guardians ride instead. It also doesn't sound like you've ridden it before: even if you don't like the ride, there's much more to it than "a few silly fights."

Great article. It seems to me that you forgot Tokyo Disney Sea's Journey to the Center of the Earth in your review. No themed setting rivals Mysterious Island to this day, not even Diagon Alley or Cars Land. And all great rides (like the original Tower of Terror, which is not a dark ride but a hyperdrop ride) start with a great setting. That ride is more than 15 years old and remains to many the ultimate dark ride experience. I would call Shanghai's Pirates a great second.