This Modern Marvel is Disney's Best Ride EVER... And You've Probably Never Ridden It! 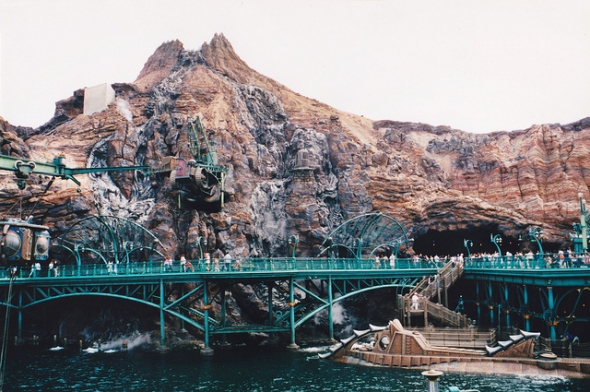 Appropriately, our voyage to the planet's core begins behind the smouldering, rumbling, cooled lava flowsof Mount Prometheus' cone. Massive chambers are carved into the volcano's caldera, lit only by overhead excavation lamps and the occasional breaks of sunlight through ancient volcanic vents (and the massive hole created by the diamond-tipped drill boring into the mountain's shield). The tunnels are scoured and scored by centuries of seismic forces, cracking and crumbling. And yet, ahead in the darkness, an otherworldly red shines against the cavern walls.

It's the rides marquee – one of Disney's finest. JOURNEY TO THE CENTER OF THE EARTH is lit only by the slowly-flowing magma that drips continuously behind it, bathing the chamber in the undulating hues of orange and red as hissing steam escapes from within. 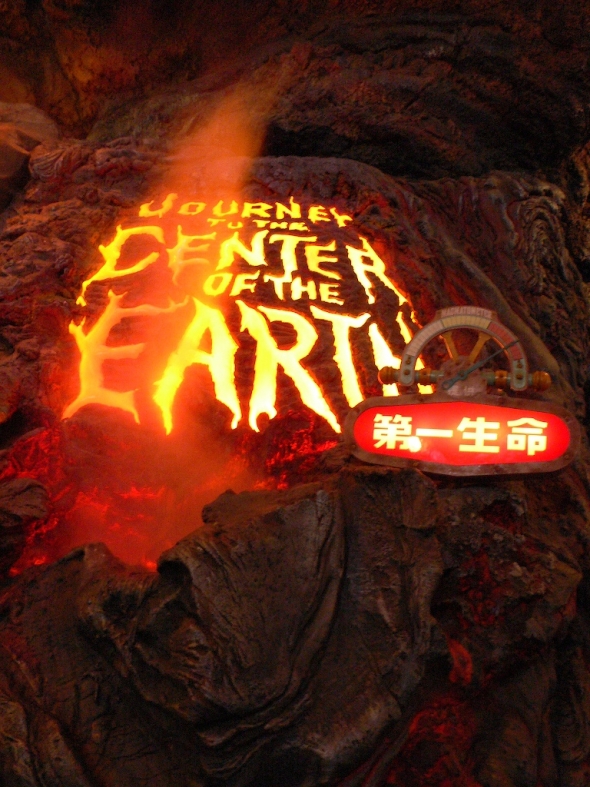 The queue passes through a volcanic chamber before switchbacks weave to and fro, seemingly built around upheavals of earth around the cavern. They're hissing and steaming with gold and red – an indication of just how active Mount Prometheus really is. 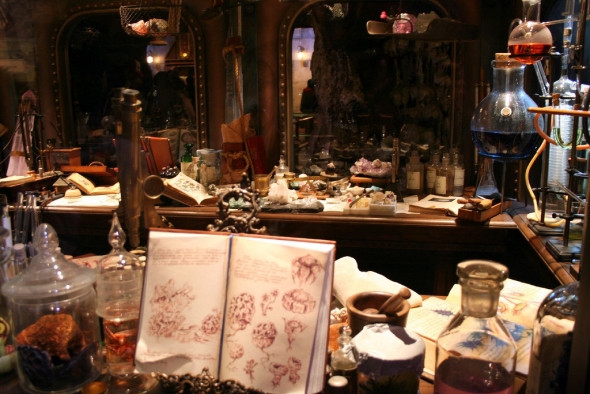 Passing through his scientific equipment, we're standing in one of the most beguilingly detailed queues that Disney has ever built, stocked with enough trinkets, artifacts, and details – all amid the cavernous interior of the volcano! – to make Indiana Jones Adventure jealous. Those with an eye for detail will note recent journal entries, sketches, and notes left behind detailing mysterious eggs discovered en route to a yet-unexplored level of the mantle. Nemo seems to hypothesize that the fossilized eggs appear to belong to an unidentified arthropod... a new species?

But that's neither here nor there... any journey to the center of the Earth requires a descent. So next, we're batch with other guests and stood outside of a peculiar invention – a Terravator. (Yes, think of this as the earthen cousin of EPCOT Center's Hydrolators from The Living Seas.) Once inside, the doors glide closed as the distant, subtly mysterious ride score present throughout the queue fades. 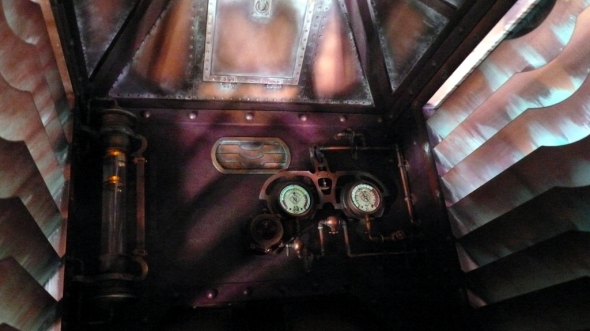 As sounds and lights whiz past, the elevator rumbles and gently glides farther and farther into the Earth. A show unto itself, the magnificent descent is a truly outstanding example of how light, sound, and motion can combine to astounding effect. And don't misunderstand – this elevator really does move! 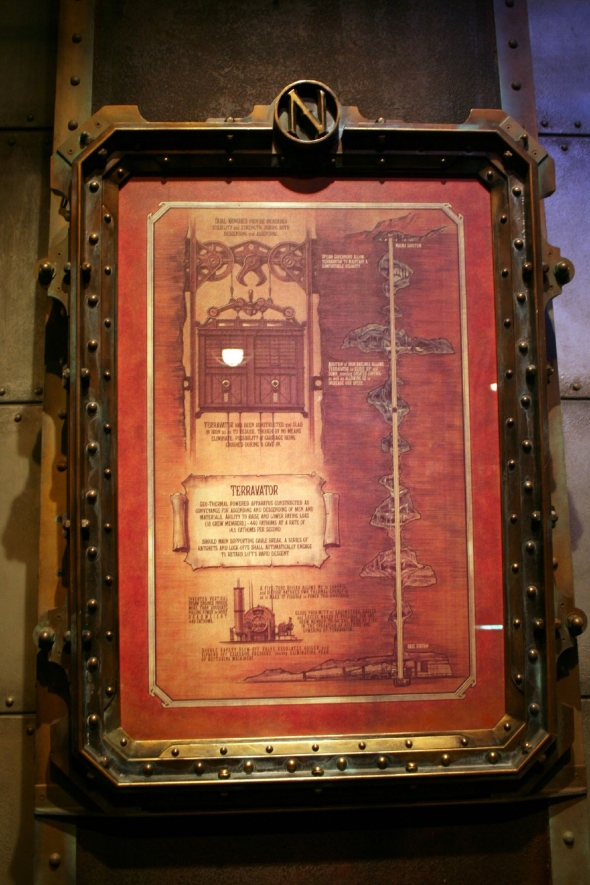 When the single set of doors opens, we find ourselves in a smouldering, claustrophobic cavern deep into the planet's crust. Massive overhead ducts carry fresh air from the world above, powered by enormous, humming bellows and steaming boilers. The path descends down from the Terravators and around the gigantic equipment supplying this deep-earth outpost and the tense spring-pillars primed to support this would-be burial chamber in case of an earthquake. 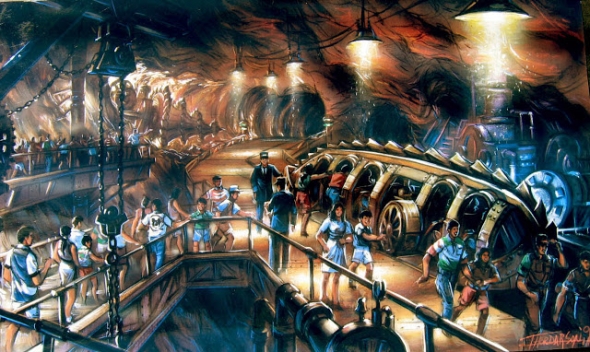 It's here – with a head start about half-a-mile into the Earth's outer layers – that we'll join with our vehicle... it's an earth-moving excavation cart seating six in three rows. Clearly related to the Nautilus, the darkened, brass vehicles are lined with a metallic spine and headed with an angled shovel for shifting rocks from our path. We'll need it, since our journey today will take us to a distant outpost.

As the vehicle crawls out of the loading dock, the adventure truly begins.

The wonders of the deep

Afte the steaming, belching, industrial darkness of Nemo's Mysterious Island, it may be surprising that – leaving the man-made world behind – our first view of the earth's innards is among its most serene. 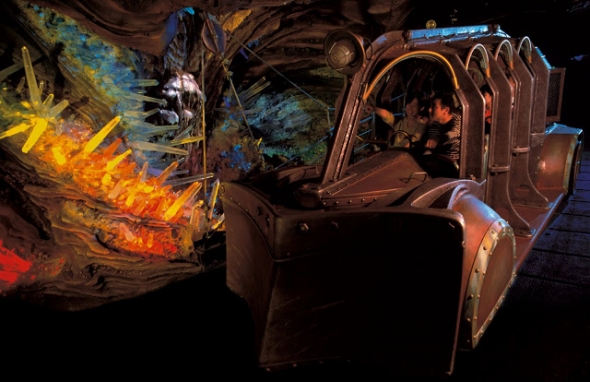 Just as the ride's gentle, distant, ethereal score kicks in, the cart turns the corner from the loading dock and enters into an endless cavern of glittering crystals. The glowing prisms are swirled as if by some great internal magnetic force, endlessly vortexed into the distance via forced perspective. The cart climbs effortlessly along the swirling path through the cavern as we look in awe at the surroundings. Here, inside of the deadly volcano formed by Earth's most violent processes, beauty survives. 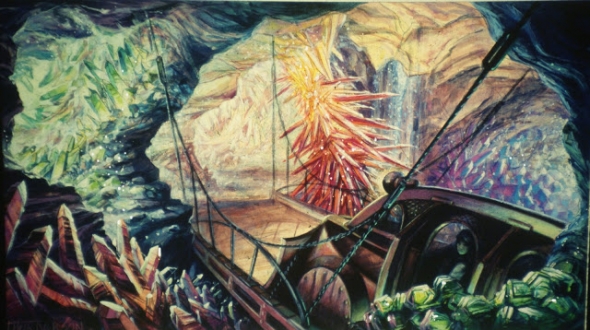 The journey continues onward, into a dark chamber where the sounds of life surround us... glowing insects seem to swirl around, as if disturbed for the first time in millennia by our approach. They flow along the walls of darkness as if in schools, buzzing and humming.

In the distance, their origin emerges:

We find ourselves crusing through a subterranean forest. Here – miles from the sun's light – animals and plants have developed bioluminescence, as glowing creatures surround. While they may appear alien, these animatronics were designed to be distinctly possible – adapted to the low light and low oxygen of a deep-earth habitat. (Again, the work of Tom Thordarson and his team. Tom told Disney and More, "I researched real glowing fungi and mushroom species. I created a world where light came from the natural bioluminescent mosses and plants and the water was full of phosphorus plankton.")

As the vehicle hums past the moss-plucking skenks and curious leaping insectoid creatures, it passes under massive, unimaginable fungi and towering plants that sway like coral. This otherworldly forest feels somehow friendly, not unlike the glowing alien forests of PANDORA's Navi River Cruise at Disney's Animal Kingdom. But here, these creatures are all more surprising in that they don't live lightyears away... just a few miles below. 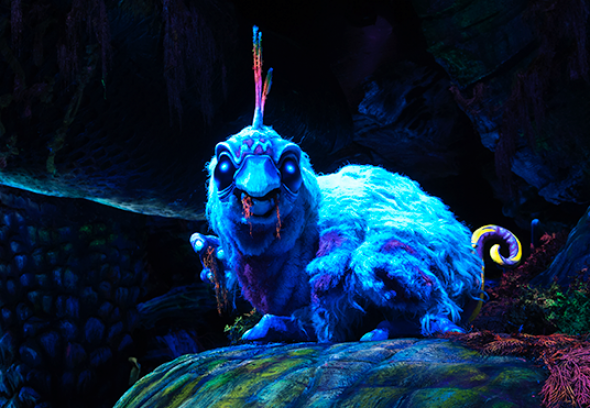 After weaving through the forest, though, a green light signals our arrival at the observation outpost. The mossy jungle gives way to a chamber of red rock, evidently cleared away via a massive drill, with spiraling paths bored into the walls. Only, ahead, flickering, swaying excavation lights signal a recent tremor... and as we feel the brakes slam against iron rails, the path ahead is lit by a red warning lamp: our path forward has caved in. Losing control, the cart races headlong to the left, into an uncharted lava vent...

Things are heating up... You won't believe the explosive finale to Disney's best ride ever. We'll wrap up our Journey on the last page...