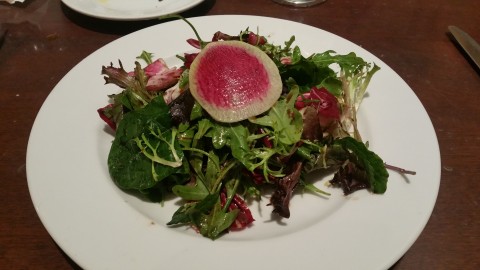 Walt Disney World is famous for the special care they give visitors with special dietary needs.  It’s easier than ever for guests to modify reservations on My Disney Experience to include allergies or sensitivities.

However, vegans and vegetarians may be surprised to find no option to mark their diet on a reservation. Disney has made vegetarian options so widely available throughout the parks that guests rarely need to let restaurants know ahead of time. This has made the process more straightforward for vegetarians, but what about vegans—those who don’t eat meat, milk, honey, eggs, or other animal products?

A vegan guest may be treated to a mouth-watering extravaganza of vegetables, plant-based proteins, and healthy desserts at one location, only to be sorely disappointed by mediocre salads and plates of fried starches at another. Most cast members working in Disney dining understand the limits of a vegan diet, but confusion is so common that many vegan guests end up having to describe their diet as “vegetarian with an egg and dairy allergy” to prevent awkward mix-ups.

We looked at five categories of vegan dining in Disney World and found some surefire wins and a few total fails. 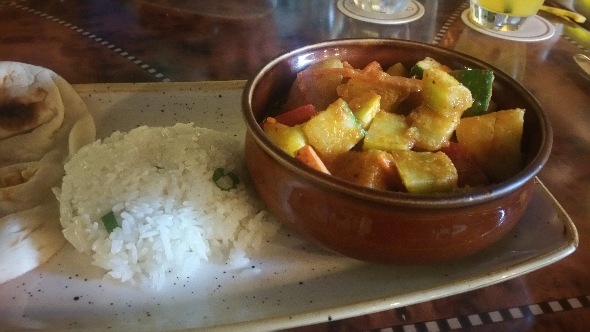 Jungle Navigation Co. Skipper Canteen in Adventureland is a newer addition to the Magic Kingdom dining lineup, and we quickly fell in love with this quirky establishment despite skepticism after our first visit. The restaurant is almost entirely staffed by Jungle Cruise skippers, and despite the attraction’s cringeworthy reputation for humor, the hosts and servers at the restaurant had us in absolute stitches throughout our meal. We enjoyed ourselves so much, we ended up visiting three times.

The restaurant has an allergy-friendly menu that includes several vegan options including falafels (sans tzatziki) and a tasty noodle salad. Our hands-down favorite, however, was the Curried Vegetable Crew Stew, a decadent bowl of spiced vegetables in curry with a side of coconut rice. The only things vegans lose from this dish is a side of naan bread (you’re not missing anything). The stew was rich, filling, and a perfect match for the exotic atmosphere.

Want an extra special treat when you visit? When you arrive at the check-in desk, ask to be seated in one of the two smaller dining rooms. You may get the pleasure of being sat next to the one of the eight wonders of the world—the Great Wall of China. 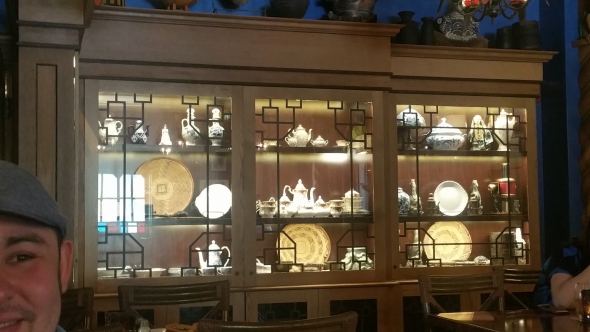 Despite its charm, the Skipper Canteen did have one vegan fail. The Noodle Bowl was utterly flavorless. Paired with the high prices at this dining location, it almost prevented us from coming back. We’re glad we gave the Skipper Canteen a second shot though—the atmosphere is definitely worth it.