For decades Universal Studios Hollywood and its glamorous behind-the-scenes Studio Tour have been known the world over as the must-visit spot for seeing how movies are made. But at the brand new Universal Studios Florida, you'll do so much more than see behind the scenes; you'll "ride the movies!" Overseen by executive producer Steven Spielberg, this innovative movie park largely skips the making-of in favor of explosive, wild, one-of-a-kind encounters and special effects extravaganzas placing you into your favorite action stories.

Here at Universal Studios Florida, you can be terrorized by Jaws, get caught in an 8.3 magnitude Earthquake, race through time on Back to the Future: The Ride, and head for the stars on E.T. Adventure. But at the park's grand opening, one attraction stood supreme. 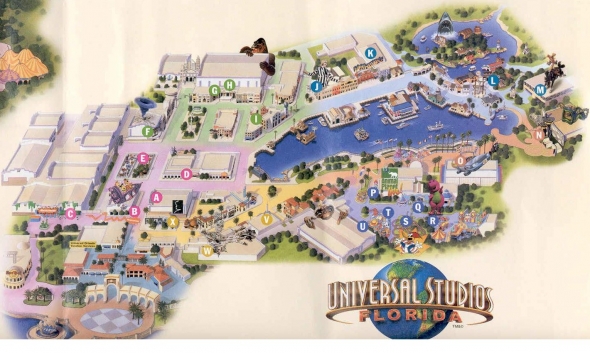 It all starts in the park's New York lot. See, some parks are packed with themed "lands" conjured entirely from imagination. Even when they do relate to real places or time periods, Disney's lands are often passed through a lens of "magic." In other words, you could take your DeLorean through time and around the world and never find a village that looked like Main Street U.S.A., an outpost like Adventureland, or a Western town like Frontierland. You can't trace them to a particular place or time, and if you could, you'd see that their real life counterparts don't look much like Disney's more colorful creations.

At Universal Studios Florida, things are different. The park's lots aren't imaginative realms of nostalgia and wonder; they're would-be film sets – and good ones; so convincing that, to the eye (or more importantly, the camera), you might swear you were really in San Francisco, Hollywood, Martha's Vineyard, or, for today's story, in New York City. Not an idealized, romantic version, mind you... 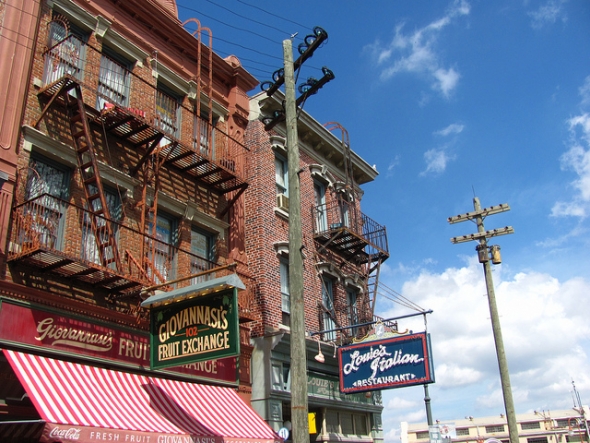 The real New York. Or at least, how a filmmaker would want it to look.

And here in New York resides the daunting white marble exterior of the historic (and demolished) Pennsylvania Station. Though in real life Penn Station was a main intercity railroad station for New York City from 1910 - 1963, here its granite pillars are strung with era-appropriate attraction banners, almost as if it were the entrance to an exhibition hall. The images – modeled after the look and feel of 1933's King Kong – show a gigantic ape and the promising title, KONGFRONTATION. 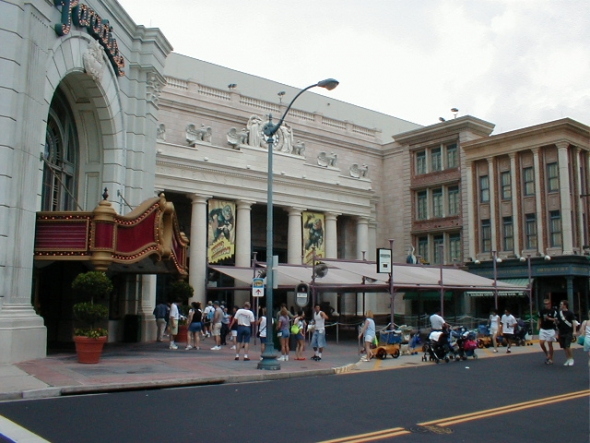 Inside the station, you'll pass through a fleeting room of camera equipment and hot set lighting, signalling the "Stage Entrance." From here on out, you're the star in a developing catastrophe striking the Lower East Side. Right away, the outside world gives way to a graffiti-covered station (designers had, after all, been looking at a New York of the 1980s for inspiration...) lined with retro '70s advertisements for everything from Coca-Cola to 1976's Rocky, Alamo rental cars, and later, Universal's 1998 big-budget action remake of The Mummy. (Alright, so the timeline's a little fuzzy.)

Back and forth through safety-yellow switchbacks, you'll pass through the station as overhead televisions show shocking live updates of a most unusual emergency: A giant ape is attacking New York! Indeed, via footage from Universal's 1976 film, we're caught up to speed... We're in the middle of a national news story: "KONG ON THE LOOSE." Real life news anchor Rolland Smith is on hand with WWOR-TV to deliver the grim news: Kong has escaped his Manhattan showing and has already destroyed two elevated trains. Now, he's heading toward the East River. 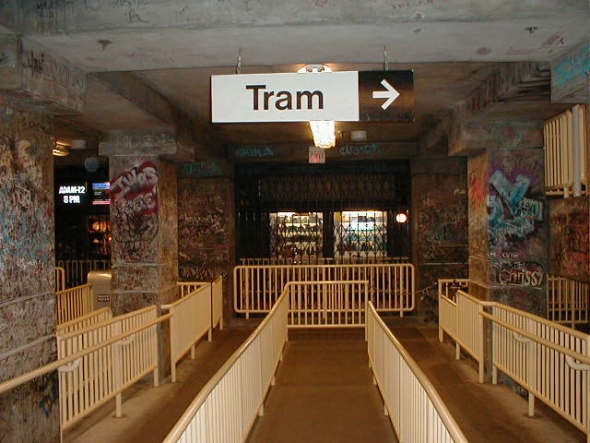 Even as you navigate the twisted switchbacks of the graffiti-covered underpass, ahead you'll notice the streets of New York – an entire block! – of shops barred and boarded. A ramp leads from the musty confines of the city's underpasses and up through the Lower East Side to the tram station. There's a sense of urgency and nervous excitement as one tram after another arrives, fills, and departs, the Emergency Broadcast System blaring warnings and evacuation orders.

Then, it's our turn... As the lights of the station platform begin to flickr, we rush aboard the seven-row trams and prepare to escape the city. Departing the station, our live tram driver tinkers with the radio, tuning into the police's frequency to monitor Kong's movement through the city as radio chatter tracks the devestation left behind as the ape moves eastward from 59th St. Glancing into the second-story apartments, television sets glow with different channels' coverage of the disaster we've found ourselves near.

As the tense strings of score play, the tram makes it first turn around the corner of a glowing neon HOTEL sign. we're looking out over an expansive city streetscape as water bursts three stories high from a fire hydrant. "It's like a war zone down there," our tram driver stammers, pale. Broken pipes bellow steam as police lights circle atop overturned cars. A train has been derailed and crumpled along the ground as if it were made of aluminum. 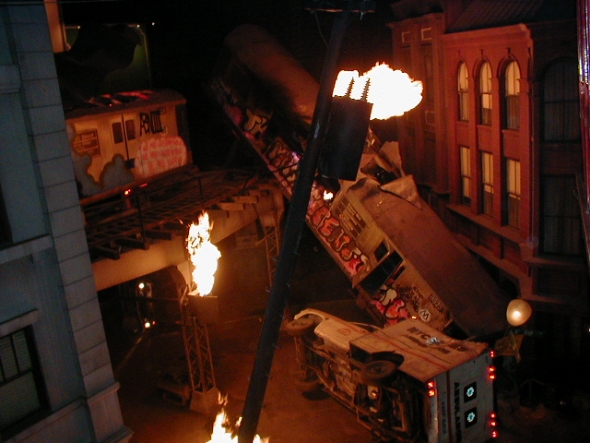 The voice over the radio calls out, "Chopper 1 to Delta Base, stop all trams. I repeat: Stop. All. Trams. Kong is now... yes, he's heading straight for the tram route! Stop! All! Trams!"

A chopper's search light appears as a focused beam, catching the silhouette of an electrical pole. Then, the shadow of a massive hand appears, grabbing the pole and uprooting it. Cleverly, a real electrical pole now sparks, mirroring what we just saw via silhouette... that means he's close! But before we can worry about Kong, the sparks from the pole rain down, igniting the spilled fuel from a toppled ambulance, which in turn ignites the derailed train with plumes of red-hot fire exploding from it.

"The bridge," the radio chatters, "he's heading toward the bridge!"

But now, a curtain of rising steam blocks our view ahead as the tram presses forward. Squinting into the distance, we try to make sense of the next scene... but it's impossible. Until a flash of distant sparks reveals the hazy shape of a menacing figure, hanging onto the iron supports of the Queensboro Bridge... "Oh no... there he is! It's Kong!" 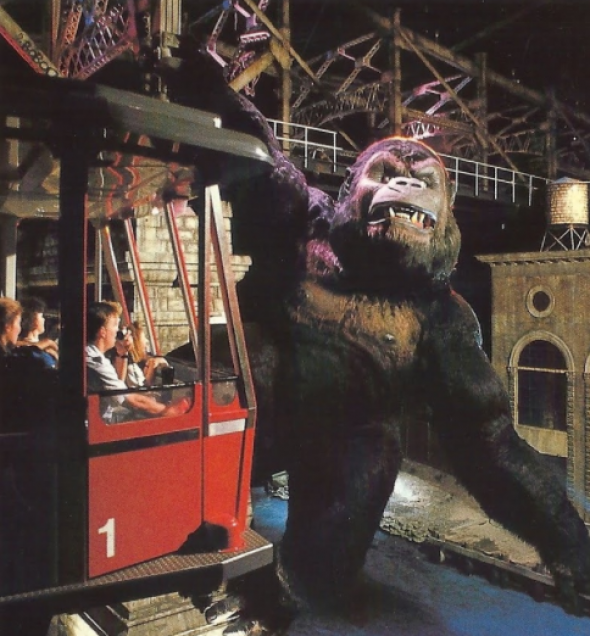 A police car is hanging off the bridge, its spinning red light illuminating the horrifying figure ahead. The sparks falling from the car disappear into a fog that clings to the river below... The tram driver leans out over the head. "We're a hundred feet up!"

The helicopters arrive, their spotlights circling the figure. "No, don't shoot," our tram driver calls, "Do not shoot!" But it's too late... A flurry of flashes indicate a machine gun's fire, just as we draw closer and closer to the imposing figure. Kong howls in fury, holding his massive arm up as a shield, his fingers gripping in pain. Then, he eyes us, his dark eyes wild with fury. "He's gonna hit the tram!" the driver screams. And Kong's arm races forward, shaking the tram as it dramatically drops a few feet.

But we're in luck... a helicopter crashes dramatically onto the bridge, exploding in flames and distracting the enraged Kong just long enough for the tram to escape. 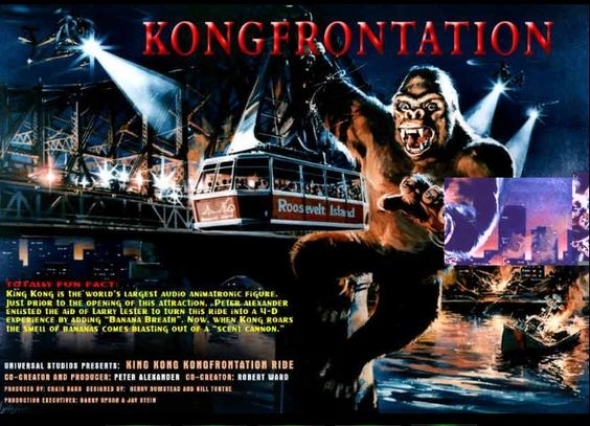 With another six-story city block ahead, the driver sighs. We've made it over the river. "Alright, folks... everything's gonna be okay. Roosevelt station is right around this next corner." And indeed, flashing police lights around the bend may indicate that we'll make it safely to the rendezvous point for our shuttle out of harm's way.

But as the tram makes the turn, the only thing ahead is a blinding white light. The piercing, unimaginable spotlight makes all of us aboard look away, shielding our eyes from the focused beam. The hum of helicopter blades slicing the air make it clear that the spotlight is from a search copter, so the tram driver uses his bullhorn to yell out, "Chopper, turn that light out! I can't see! Turn. It. Out!"

But we'll wish he hadn't. 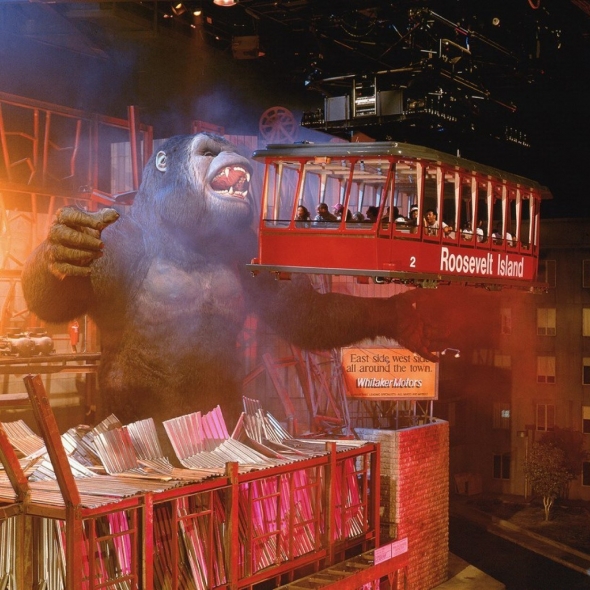 The second the light stops, our attention is drawn to the right... We're mere feet from Kong, now standing in the bent girders of a construction site. This time, Kong's had enough. The 40-foot tall creature's arms flail as the tram passes inches from his mouth. The smell of his banana breath permeates the tram. But this is the kicker... Now, the animatronic physically interrupts the ride's path, his massive hands closing in on the front and rear of the vehicle.

With his hands on either side, Kong lifts the tram up, tilting it toward him. As he inspects riders inside, he apparently deems us unworthy of his time... and drops us, the tram plunging toward the ground below as flames erupt all around. Ingeniously, the ride system Arrow designed for the attraction placed the tram on a giant upside-down scissor-lift apparatus, allowing the tram to "fall!"

The tram accelerates away as the lights of Roosevelt station appear head. As we leave Kong in the dust, we hear the unmistakable sound of still more helicopters arriving behind us, ready to wage war. As for our ordeal? All worthwhile, as televisions descend from the tram's ceiling displaying a live news feed... and we made primetime, as the news cuts to live footage of our fall.

As always, we'll finish off with a must-see ride-through video that will bring this lost experience back to life and help you to relive the experience of Kongfrontation:

Top of the Bill

For a young movie park like Universal Studios Florida, a ride like Kongfrontation was an unprecedented star. With two of the most lifelike animatronics ever developed – even to this day! – Kongfrontation was bright, kinetic, oversized, and fun. The wild romp through the city's destruction and our eventual encounters with the gargantuan creature were on-ride photo ready, and represented the height of Universal's innovation in storytelling, set design, and special effects. 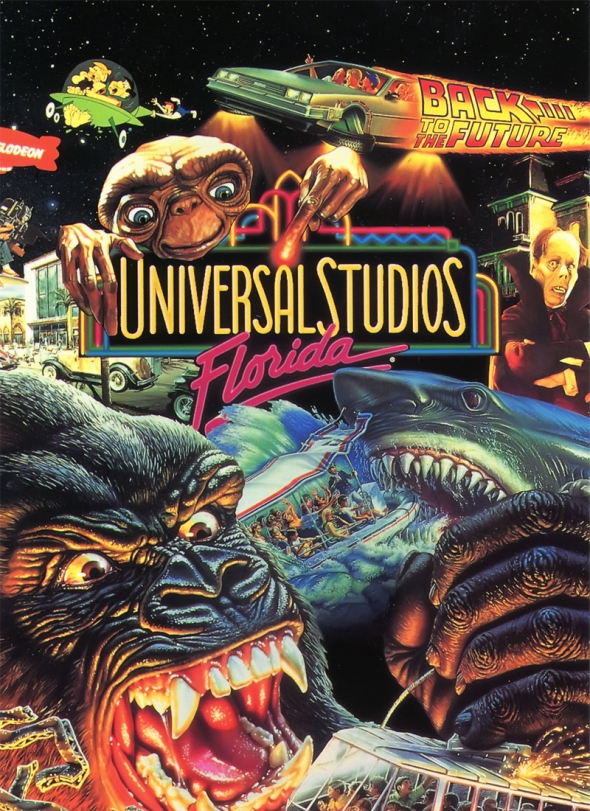 It was also the perfect ride to give Walt Disney World a run for its money – a character, topic, and delivery that they wouldn't touch with a ten-foot pole. Chances are that, if you're a '90s kid, you, too, were terrified behind comprehension by Kong (and by the one-two-three punch of the rest of Universal's lineup of disaster rides... after all, a day at Universal is a day where things just can't seem to stop going terribly wrong)!

But like most of Universal's early classics, Kongfrontation was doomed.

Ahead, we'll dissect the ride's closure and replacement, then examine what happened when Universal decided to give the King another headlining ride... albeit, in a different park and a very different way.