Of all people to bring Universal’s starring creature to life, Universal turned to Bob Gurr, living Disney Legend. Bob is a household name for Imagineering fans, instrumental in the design of Disneyland from the very earliest days. He’s often known to say, “If it moves on wheels at Disneyland, I probably designed it.” That includes Tomorrowland’s Flying Saucers, the Omnibuses on Main Street, U.S.A., the Autopia cars, the Matterhorn Bobsleds, the Monorail, and more.

But Bob retired young from Imagineering and joined with two former Disney designers to start Sequoia Creative Inc., with whom Disney often consults to this day. Universal approached Gurr and his associates with crude plans for a giant Kong figure made of gigantic gears and improbably heavy mechanics. Gurr instead began toying with a way to bring Kong to life in a simpler, smarter form. 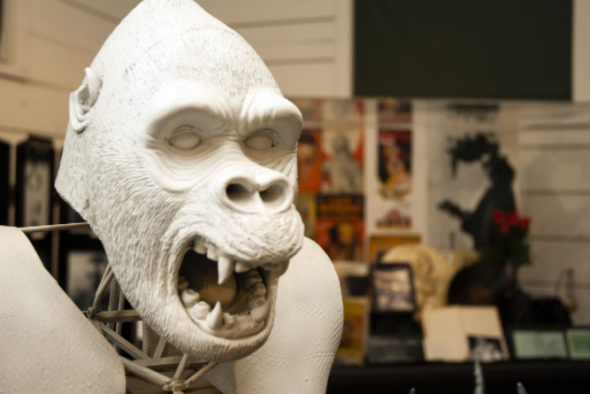 As part of David Oneal’s astounding look at Hollywood’s Kong Encounter, an interview with Bob Gurr includes an unbelievable look at a scale model showing just how simple the final design of Hollywood’s figure is. Topping 30-feet tall and covered with 660 pounds of fur, the astounding figure even included two speakers (one for guttural growls and another for high pitched, directed screams), flashing eyes, and banana-scented breath.

On June 14, 1986, Kong was ready for his off-screen debut. And what guests found now along this new segment of the Studio Tour was enough to leave them raving! 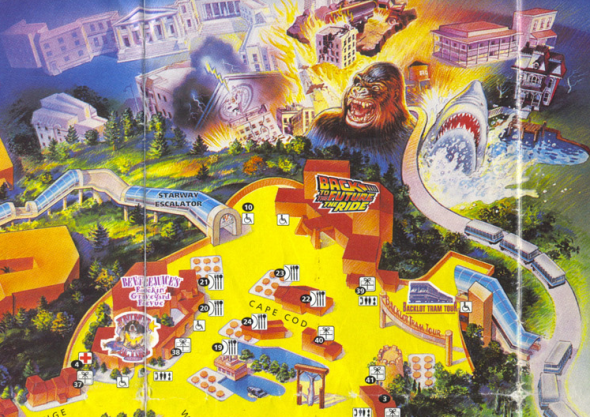 As the tram enters into a soundstage, we’d find ourselves driving along an elevated roadway through New York City’s Lower East Side. The first indication that something’s amiss would be the 50-foot tall geyser of water streaming skyward from a fire hydrant, smoldering wrecked vehicles littering the roadway below. Glancing into the second story apartments, adjacent guests would see televisions all tuned to the local news and overhear the broadcast… Something about a “path of destruction?” “Military units rushing to the scene?”

WWOR-TV host Rolland Smith then turns the feed over to field reporter Kelly King, who’s broadcasting live from a helicopter hovering over the L-train.  “The helicopter beside us is searching for – Wait! There’s a tram load of people down there! We’ve got to warn them!” She grabs the helicopter’s bullhorn. “Attention people on the tram!” Her voice is now amplified, coming from the television and from above… Wait… is she talking to us? “You’re in danger! I repeat, you’re –“ She looked ahead in shock, then screams. 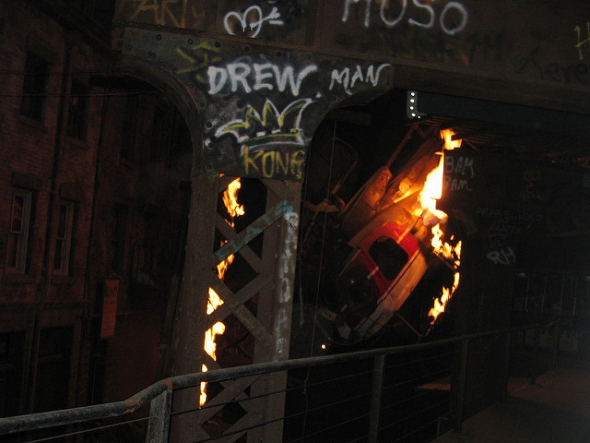 Directly to the side of a tram, a helicopter comes screaming from the sky, landing in a tangled net of electrical wires and bursting into flames as the TV cuts to static.

Making a sharp left, the tram would approach a suspension bridge, but just as the tram begins to cross, a helicopter’s searchlight and a burst of fire reveal the 30-foot Kong to the right! 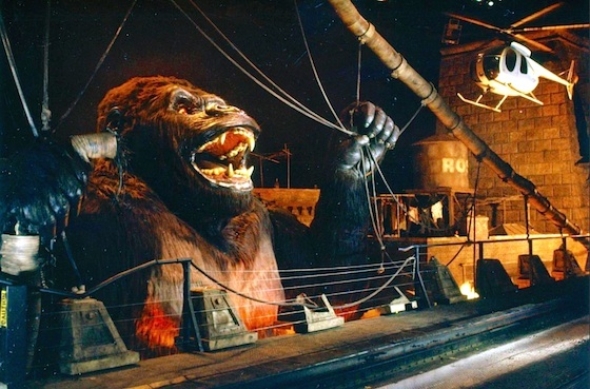 His fingers are laced into the suspension cables, his eyes glowing like embers. As he shakes the bridge, the roadway rumbles and he roars. With a final pull, the tram slides 3 feet sideways and right toward his gaping jaws!

At the last moment, the tram accelerates away and back into daylight. But not before a final burst of banana-scented breath from the oversized ape.

You can catch a glimpse of this Hollywood original here:

1986’s King Kong Encounter was a massive hit on the Universal Studio Tour, and helped put Universal “on the map” as a destination for themed entertainment. The four-minute experience was a spectacle that left guests talking, and the larger-than-life encounter stunned the industry. 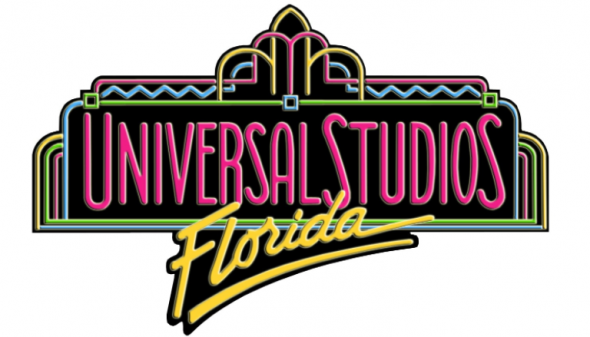 It was the push Universal needed to consider buying up some property in Central Florida. Maybe – just maybe! – their penchant for cinema, movies, and now special effects could warrant a park near Disney’s turf… In fact, Universal planned to duplicate their Studio Tour and transform Central Florida into a “Hollywood East” where production would pick up and carry on.

However, Disney had just gotten itself a new CEO, Michael Eisner, who had previously been the CEO of Paramount Pictures. Insiders say that, because Eisner was from the film industry himself, he knew of Universal’s plans to build a movie park in Florida, so one of his first major feats at Disney was to build a Disney-branded studio park first. Universal announced their Orlando park before Disney could, but Disney’s unique legal arrangement in Florida (which effectively gives them governmental control of themselves, allowing them to sign their own permits) meant that the Disney-MGM Studios opened almost a year before Universal Studios Florida could.

While it must’ve stung that Disney gained the upper hand and fast-tracked their own studio park, the most underhanded move of all was that Disney’s studio park would be focused around – you guessed it – a multi-hour tram-tour through the studio and staged events. Not only had Disney stolen Universal’s studio park concept, they’d stolen their bread-and-butter… the tram tour they’d been running since the 1960s!

Ultimately, Disney’s theft benefitted Universal. Forced to abandon a lengthy Floridian studio tour, designers instead took the components of Hollywood’s tour and separated each into standalone attractions! Instead of a quick encounter with a great white shark, Universal Studios Florida would feature a full Jungle Cruise spoof, as we chronicled in the in-depth entry Lost Legends: JAWS. Earthquake, too, would get its own ride rather than just a segment of the tour!

And as for Kong? He’d have the most impressive of them all… A full, standalone experience that would be the starring attraction at the new park. Groundbreaking technology and incredible effects would take what Universal had learned from the 1986 Hollywood version and expand it to a complete ride in time for Universal Studios Florida’s 1990 opening. 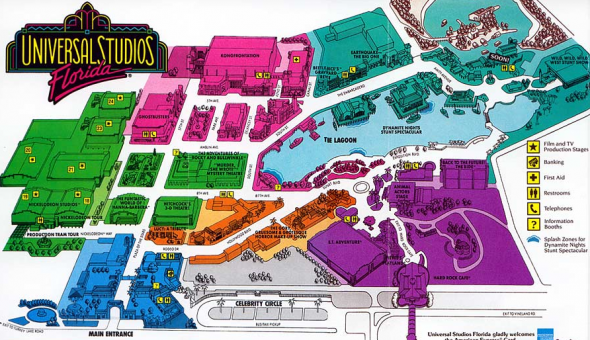 Florida’s from-scratch Kong ride would take place in a 62,000 square foot ride showbuilding six stories tall, concealed behind the park’s realistic and immersive New York streets. The slabs of concrete used as the building’s exterior walls were the largest ever used for construction.

Without the constraints of a tram, Universal had the freedom of a blank slate in exactly how guests would tour the perilous aftermath of Kong’s rampage. The ride system they opted for was designed by Arrow Dynamics (creators of some well-known roller coasters, including the world’s first ever modern steel coaster, Disneyland’s Matterhorn Bobsleds) who in turn subcontracted Intermountain Lift, Inc. 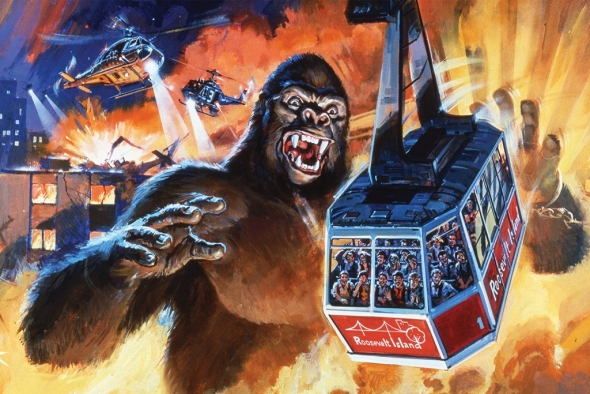 That may sound odd until you see the vehicle they created: an aerial tram vehicle modeled after the Roosevelt Island Tramway connecting Roosevelt Island and the Upper East Side over the East River. These unique carriages would be suspended from track attached to the ceiling… and it would have some surprises in store, as well. 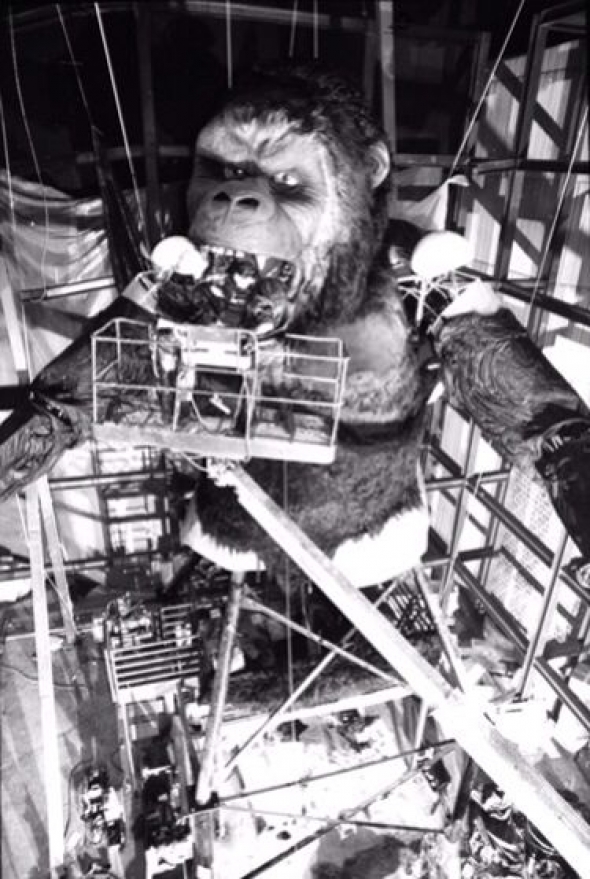 As for Kong himself, four years had advanced technologies and design processes, and two Kongs were created for the ride, both scaled to an astounding 40-feet tall with 54-foot arm spans. And now, both analog and digital controls gave the figures unprecedented functionality. While Hollywood’s figure was a brilliantly simple one that gave the illusion of intricate movement, Florida’s two apes would be sincerely astounding in their reach. Literally.

Kongfrontation opened alongside Universal Studios Florida on June 7, 1990. And like the other groundbreaking attractions at the park, it barely worked. Plagued by downtime as engineers tweaked with the complex ride systems, software, and animatronics, Kongfrontation (like Jaws and Earthquake) were so unreliable, Universal famously offered free return-vouchers to guests all summer long. But by September, the rides were ready.

And that’s where we pick up. Are you ready to witness the fury of Kongfrontation? On the next page, we’ll take a first-person ride through the carnage and see what this surprising ride has in store…