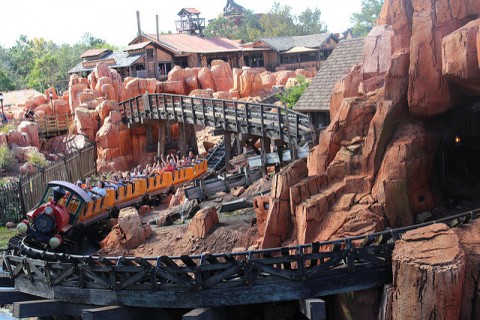 Big Thunder Mountain is one of the major E-Ticket attractions in Walt Disney World. It ultimately took 15 years of planning for the idea of Big Thunder to become a reality, but the attraction was constructed in just 18 months once a plan was solidified for the mine train roller coaster. Though the trains only reach speeds of 35 miles per hour, it feels like you’re whizzing through this attraction when you’re inside the notoriously bumpy cars.

Many guests hop on Big Thunder Mountain simply for the thrill, missing out on the rich storyline that this attraction offers. Though you have to pay attention to really understand what’s happening here, there’s a great deal of legend to appreciate around the mountain. Here’s a closer look at what Big Thunder Mountain is truly meant to be, and all that you’re encountering when you slide into the seat for this wild ride.

1. The familiar setting based on fact 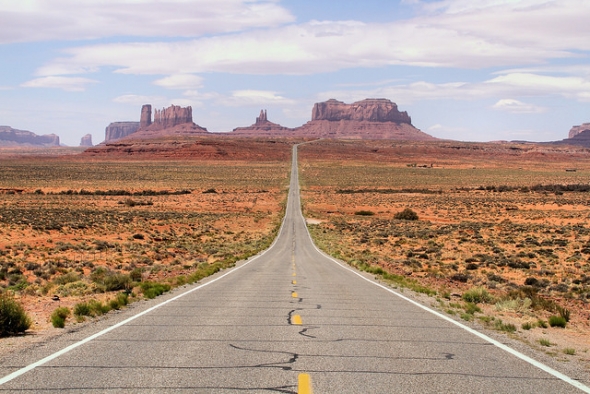 The landscape surrounding Big Thunder Mountain may look familiar if you’ve been to the American southwest. It was modeled after Monument Valley, Arizona. The massive sandstone buttes of the area are an almost identical match to this region of the Colorado Plateau.

The eerie tale behind the attraction was sourced from Arizona as well. Imagineer Tony Baxter got his inspiration for the story from The Superstitions, a mountain range outside Phoenix. As legend has it, Superstition Mountain is filled with gold hidden in the Lost Dutchman’s Mine, but great tragedy comes to those who try to take a piece of the mountain’s treasure for themselves. It’s said that the conquistador Francisco Vasquez de Coronado wanted to dig in the mountain range, but local Apaches refused his requests for help. The Apache believed that the mountains were sacred ground protected by the Thunder God. 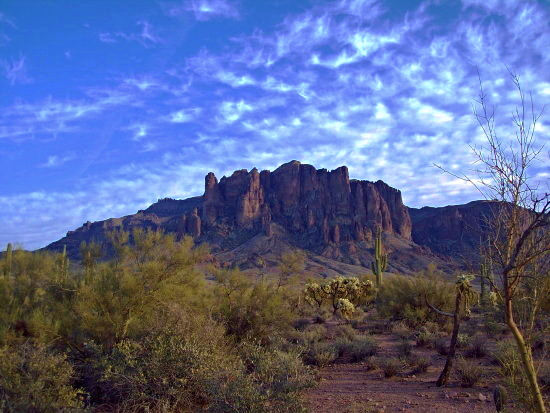 When the Spaniards began to seek gold in the mountains anyway, they started mysteriously vanishing, only to show up dead days later. Tragedy continued to strike the explorers until Coronado ultimately gave up.

According to a later story, in the 1840s, Don Miguel Peralta succeeded in mining the Superstitions. He dubbed his the Sombrero Mines for the hat-like shape of the mountains, though others contended that the range more closely resembled a finger pointing skyward and called it The Finger of the Gods. When local Apache tribes discovered Peralta defiling their sacred mountains, they rose to defend their Thunder God and slaughtered Peralta’s group to the last man.

The legend of the Thunder God went on to inspire the name and storyline of Big Thunder Mountain, turning a rather gruesome tale into one of the famous mountains of Walt Disney World.

2. The tragic tale of Tumbleweed 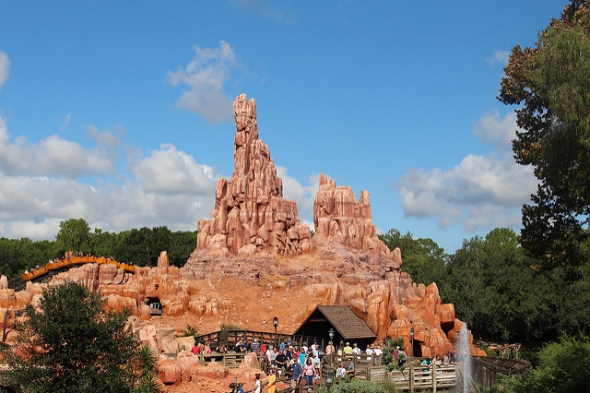 The original story behind Thunder Mountain centers around the tiny mining town of Tumbleweed. At the height of the gold rush, Tumbleweed sprung up beside the mountain known as Big Thunder. An ancient Indian burial ground, the mountain was a dangerous place to mine for gold, but human greed prevailed and men began taking ore trains into its caverns nonetheless.

The more they mined, the more the mountain fought back. Unmanned ore trains were pulled down the tracks by invisible spirits. The mountain thundered in rage at the invasion of the miners and eventually a flash flood wiped out Tumbleweed altogether. Antiquated mining equipment (some of it real antiques sourced to give an authentic feel to the ride) hearken back to the original mining town. Listen carefully in some of the mines and you can hear the ghostly sounds of lost miners though there’s no one to be seen.