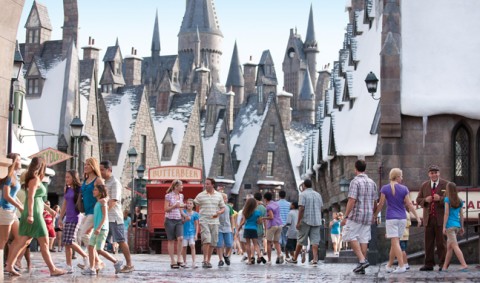 One of the great things about the internet is that everyone has the ability to chime in with their own opinions on lists and rankings. This fun diversion provides us all with a chance to think about happier subject matter during a trying (or boring) day. We can shut our eyes and reminisce about the last time we went to a theme park…or dream about our next vacation.

Recently, I took the opportunity to highlight the Top 100 Theme Park Attractions in the World as chosen by you, the loyal readers of Theme Park Tourist. I also offered my own thoughts about how you rank the ten highest ranked attractions at Walt Disney World. Today, I’m going to head over to the other side of Orlando, the one that’s more wizardly. What follows is a list of the top 10 attractions at Universal Orlando Resort as voted by all of you. I’ll also offer my feelings on what you got right and what you got very (very very) wrong. As a reminder, you always have the option to head over to the Top 100 page and vote, thereby shuffling the results a bit. When more people weigh in, the results are stronger!

The list is one second old, and you’ve already thrown me for a curve. Look, I love Dr. Seuss as much as anyone else with a pulse (and I include zombies in that). I was even at a children’s birthday party recently where a five-year-old boy received a copy of Yertle the Turtle. I showed more interest in it than he did. In his defense, there were giant balloons, some dinosaurs and a toy helicopter.

Anyway, the point is that even as a lifelong Dr. Seuss admirer, I see Caro-Seuss-el for what it is. This ride is the most basic carousel imaginable, reskinned with all the colors of paint required to give a Dr. Seuss feel. Plus, each horse…like…thingamabob is interactive. Levers empower children with the ability to make their creature blink and turn its head. When parents vote for Caro-Seuss-el, they’re saying that they love sitting down for a few minutes of peace and quiet. They’re getting to relish in one of the best things about being a parent: watching a kid laugh and smile. And that’s more than enough for everyone to understand this vote. It’s a nod to childish exuberance.

My only comment is that King Arthur Carrousel is more attractive in person, has a century more history, and is simply better. The fact that it’s unranked while Caro-Seuss-el gets a nod irks me a bit. Still, this isn’t the weirdest Seuss-ian vote on this list. So, stay tuned!

If you’re unfamiliar with this attraction, it’s a variation of the river raft ride. Universal has added some colorful themed elements to tie it to Popeye and Bluto, one of the most popular intellectual properties of the 20th century, albeit one that’s fallen out of favor a bit over the past 20 years. This one isn’t for folks who hate to get wet, either. It’s an aggressive water ride that will drench a few unfortunate souls within the first minute.

Whether you’re intimately familiar with Popeye, Olive Oyl, and Bluto or not, this attraction is still enjoyable. It’s extremely colorful, and I love the indoor element after the barge passes under a particularly mean-spirited waterfall. Seriously, the designers of this ride must have received kickbacks from the hair dryer industry. You’ll get soaked on it.

Universal clearly loves wet rides, and you do, too. To wit, three of them are on this list. To me, this one is underrated since it ties in the theme well. Popeye has to rescue Olive Oyl from Bluto for the umpteenth time, which gives Universal an excuse to pipe in the Popeye the Sailor Man theme song. Plus, it goes pretty fast for a river raft ride. I’m a fan.

This entry is the oddity on the list. TPT lists both versions of Dragon Challenge as voting options. Our readers clearly see them about the same, but you do have a slight favorite. In the TPT Olympics, you root for Hungary over China!

Coaster fans know that the difference between the two sides of Dragon Challenge isn’t trivial. The Chinese side goes faster, 60 MPH as opposed to 55 MPH for the Hungarian portion. The Chinese Fireball actually features a steeper drop of 115 feet to 95 feet, too, but the Horntail offers more twists and turns including a zero-G roll. So, the twin attractions offer different ride experiences. I’d hoped that some enterprising YouTube videographer would have a split screen demonstration of the two versions, but I couldn’t find one. Get on that, internet!

While I consider the Harry Potter theming of Dragon Challenge quite lazy, both iterations of the ride are solid. While the Universal Orlando complex does offer better roller coaster options, this one’s still a lot of fun. If anything, it’s ranked too low here.

Where on earth did you come up with $79.99 as the price of a wand? I used to sell them at Christmas and the non-interactive are $39.95 with the most pricey interactive being $47.95