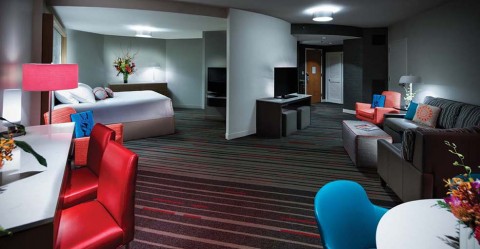 Staying onsite at an Orlando theme park is the most practical solution for theme park tourists. It’s also one of the costliest. The Walt Disney Company and NBC Universal (now a subsidiary of Comcast) have operated their vacation paradises for decades now. Each corporation has a sixth sense about how to maximize revenue, and the customer is the one who winds up paying for it.

Despite Orlando’s reputation as one of the most family-friendly travel destinations in the world, Disney and Universal designed their Orlando resorts to have widespread appeal. Each of them offers features and functionality that will satisfy any party from swinging singles (if you’re a time traveler from the 1960s) to massive family reunions. Independent of the size of your party, you can find a room or suite to fit your needs and your budgets. Today, let’s have some fun and focus on suites once again since everyone loves watching how the other half lives. Let’s see how Universal and Disney compare when it comes to providing the most decadent accommodations in Orlando.

Also, let’s decide a few things by comparison. Do the suites at Orlando theme parks match the perceptions of their accompanying theme parks? How much space do their rooms possess? And what are the amenities Disney and Universal sell in alignment with easy theme park access? When you book a room at one of these resorts, you’ll have plenty to consider. Alternately, when you look at the most expensive rooms and suites onsite, you’ll have plenty to dream about. That’s fun, too.

Let’s take this opportunity to forget about budgets and boundaries for a time and figure out how the major onsite resorts at Universal Orlando Resort and Walt Disney World compare and contrast. In order to settle this debate, we only have to set a few ground rules. The first is that we’re only focusing on Universal and Disney resorts in the Orlando area. Since Sea World doesn’t have an official hotel and Busch Gardens is in Tampa, we’re leaving them off the list.

Also, the hotels must be owned by Universal and Disney. That excludes all outside corporations and their hotels, including Four Seasons Resort Orlando at Walt Disney World Resort (actual, insanely redundant name) and Walt Disney World Dolphin and Swan. Similarly, the partner hotels by Universal Resort Orlando aren’t eligible. Now that we know the rules, let’s have some fun. Here’s everything you need to know about the best Disney and Universal hotel suites in Orlando! We'll get things started with the latter, beginning with the most recent hotel at the resort that opened just last year! 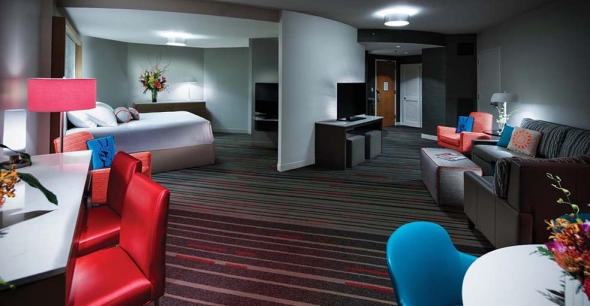 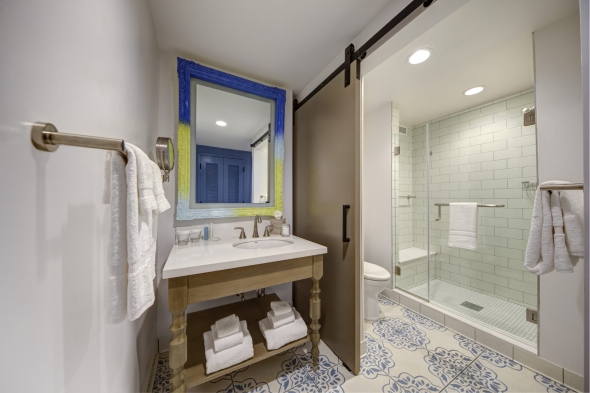 Having said that, the benefit of staying at Sapphire Falls in particular is that your room is extremely new. Having worked for several years in the hospitality industry, I stress that this is important. New facilities are almost always better in terms of functionality and amenities. Even when older properties renovate, they’re working at a disadvantage relative to newer facilities.

The two finest suites at the Universal Resort Orlando’s newest resort are the appropriately named Sapphire Suite and the Hospitality Suite. The latter room is “smaller”, with 851 square feet of space. The primary features are a massive King bed, one and a half baths with separate shower and tub, and a living room that includes a wet bar, should you want to create your own Sapphire Falls. There’s also an efficient kitchenette complete with ample counter space, plus a dining room sitting area overlooking the pool. For $450 per night, you get a lot of value with the Sapphire Suite.

The Hospitality Suite is a recurring concept at the various Universal hotels. The design of this suite emphasizes hosting capabilities. They’re all open spaces with a lot of square footage, allowing large groups of friends or family members to hang out in a larger seating area. The Sapphire Falls Hospitality Suite is 1,353 square feet, with a better kitchenette and a decadent bath tub. The dining table can seat eight, and another five can sit around the coffee table thanks to a spacious sofa and a couple of chairs. Again, the purpose of this suite is to hold gatherings, and that applies to the sleeping situation as well.

Despite its size, the Hospitality Suite only sleeps three, and that’s factoring in a rollaway as an option. Keep that in mind if you’re thinking about booking it. Since the room costs $650 per night, that could be a deal breaker for you. 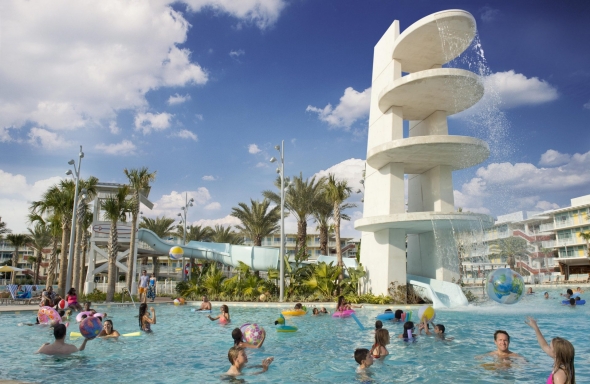 When Universal originally announced Cabana Bay, it was a daring venture for them. All of their resorts on the Universal Resort Orlando campus were upscale in nature. With Cabana Bay, they targeted entry level consumers. Of course, they also learned from Disney, appreciating that one of the keys to a wonderful tourist hotel is the theming.

Out of the five current hotels Universal offers Orlando vacationers, Cabana Bay is the coolest in my opinion. It’s a throwback to the Jet Set days of the 1960s, a tribute to the Las Vegas lifestyle. There’s something about this style that’s engrained in our collective consciousness. Cabana Bay features plenty of pastels to build a sense of calm and relaxation throughout the resort. The two pools are the closest you can come to spending a day at the Sahara with the Brat Pack. The resort somehow achieves this effect while staying family friendly. Onsite amenities include a lazy river and bowling alley!

Beyond the theming, the positive about staying at Cabana Bay is the price. Rooms are generally $175 a night or less. Even the suites cost less than the rack rate of a night’s stay on the Concierge Floor of Hard Rock Hotel. The downside is that it’s the hotel that is least convenient to the parks; also, remember that you don’t receive the Universal Express Unlimited pass here unless you pay extra.

As far as the suites go, family suites are readily available. They’re also not that much more than regular hotel rooms. Many of the family suites cost $225 a night or less. Then again, all you’re getting for the extra money is a slightly larger bathroom and a better view. All of these suites allegedly sleep six, but that feels like a stretch. The good news is that these rooms will provide views of the gardens below, the adjacent pools, or – and this is the one worth consideration – a bird’s eye view of Volcano Bay, the new Universal water park introduced in 2017.

The “nicest” suite at Cabana Bay is the 2-Bedroom Suite. Unlike the others listed above, it’s spacious in size, providing 772 square feet of room for you to spread out and relax. Parents will be glad to know that it also includes two bathrooms, so mom and dad don’t have to share with the kids. There’s also a pullout sofa in the sitting area, stretching the number of potential guests to eight. Plus, all of the 2-Bedroom Suites come with a view of Volcano Bay. It’s not a bad deal and, at a price $360 per night, it’s the most affordable full suite at either Universal or Disney.