Walt’s “world on the move” is no more. 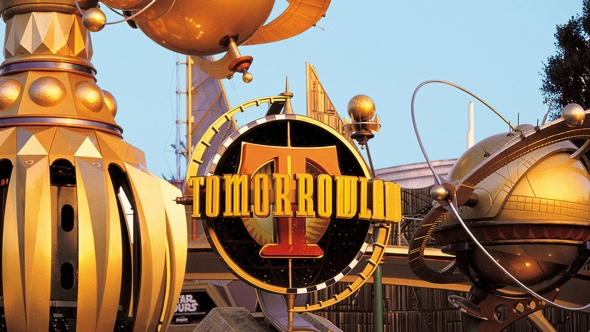 Tomorrowland had been transformed. The first thing you’re likely to notice is the land’s entry. The grand plaza of flowers and geometric concrete planters had been uprooted, and in its place, towering crystalline rocks have burst forth from the ground. The fantastic geodes are supernaturally oriented around a massive golden contraption in the land’s entrance, marked by spinning gold and brass planets with sails, rivets, and metalwork orbiting above golden rockets.

The Rocket Jets that once revolved high above the land have been grounded (literally), replaced by the beautiful and hypnotic Astro Orbitor that looks like as astronomical device straight out of da Vinci’s sketchbook. 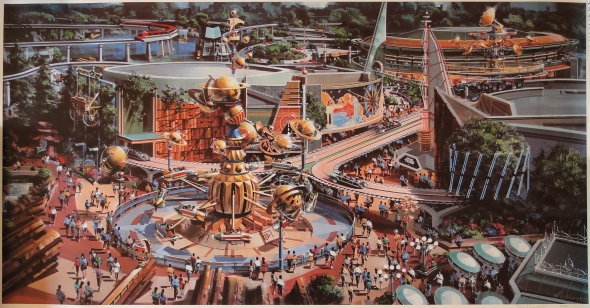 The land’s two mirrored showbuildings that flank its main entry are now washed in deep, dark bronze with planted hillsides and crawling vines snaking up their exteriors, with deeply saturated murals along their convex sides.

The Carousel Theater is now dark and brassy with a towering, deep green marble wedge and a bronze globe announcing its new inhabitant: Innoventions, a west coast transplant of Epcot’s rotating exhibit. Innoventions’ lineup is meant to revolve (pun intended) as it showcases the technologies of the corporate sponsor who’s taken up residence. 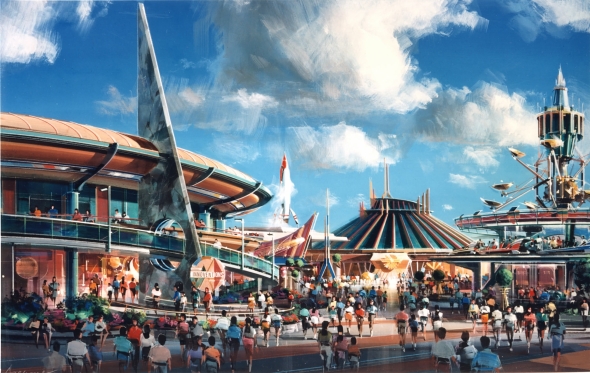 Space Mountain, of course, is here, too, but the white conical mountain of your grandfather’s generation is gone. Now, the building is deep bronze with oxidized green and teal showing through. At its base, the Magic Eye Theater designed to showcase George Lucas and Michael Jackson’s Captain EO has been painted dark brown, too, and it now hosts another borrowed Epcot attraction: Honey, I Shrunk the Audience, a 3D adventure. 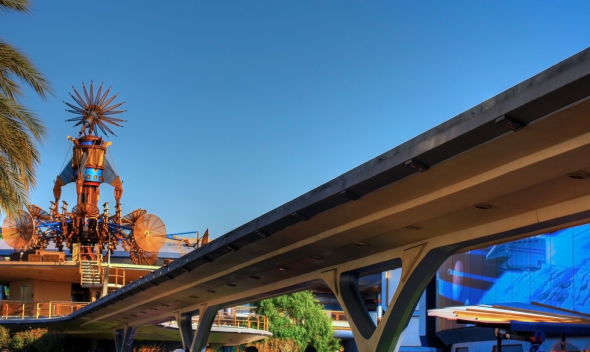 At the land’s center, high atop the central pedestal, a most unusual sight: a bronze mechanism with metallic arms holding satellite dishes. Once in a while, as if synched up to the clock, this contraption comes alive to the rousing classical orchestral score borrowed from Disneyland Paris’ Discoveryland, revolving and lifting its satellites toward the sky as if searching. (This Observatron is quickly recognizable as the old skeleton of the Rocket Jets, its rockets replaced with satellite dishes.)

But this land’s headlining attraction might surprise you. Look overhead to the aerial highways of the PeopleMover that would gently glide through the land. It’s here along these now-brown tracks that you’ll find Disney’s newest E-Ticket. And truthfully, you may hear it before you see it. With a screech and a electronic squeal, the would-be star of this New Tomorrowland – its only original attraction – is ready to tour you through the land.

Ride the Road to Tomorrow 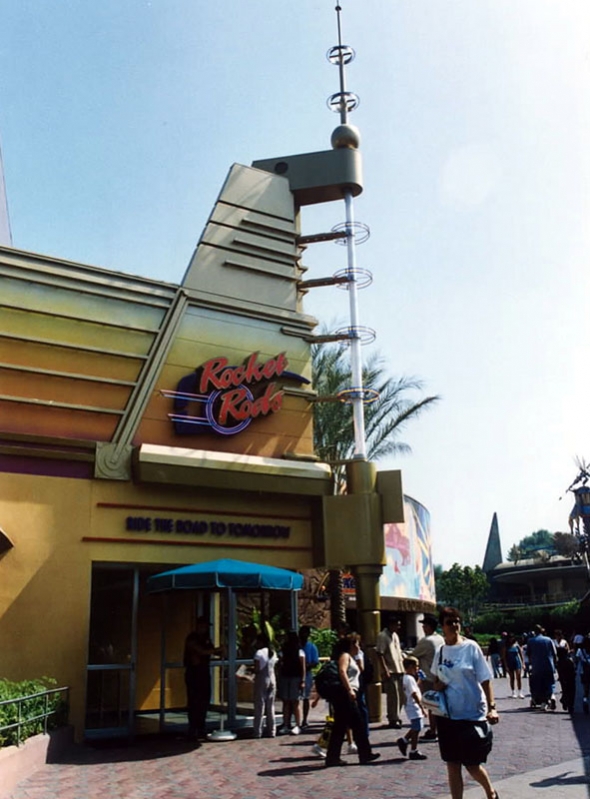 The PeopleMover’s loading platform used to be accessed by a moving speed ramp carrying guests from the Rocket Jet’s platform base to the second level of the land, where continuously moving PeopleMover trains would glide effortlessly through the station. The Rocket Jets load in the same place, but these slow-loading, low-capacity vehicles require a much more robust queue.

So you’ll find the entrance to the ride right at the entrance to the land, just across from the entrance to Star Tours (now also painted golden and affixed with organic sail-like towers, as if Jules Verne was a Star Wars fan). The north showbuilding along Tomorrowland’s main entry used to be Walt’s Circlevision theater, with nine screens arranged around audiences for full 360-degree films. The queue and theater from Circlevision are now the waiting area for Rocket Rods. Cleverly, the queue carries you past replicas and models of Disneyland’s transportation systems (alive and dead), painted blue and projected with grids as if to analyze them.

Passing into the old Circlevision theater, the nine screens are now alive with a whimsical “documentary” style preshow tracing the evolution of transportation from the idling speed of the past to the fast-paced future, all thanks to the Tomorrowland Rapid Transit Authority.

And today, you’ll experience the next step in the evolution: the Rocket Rod. 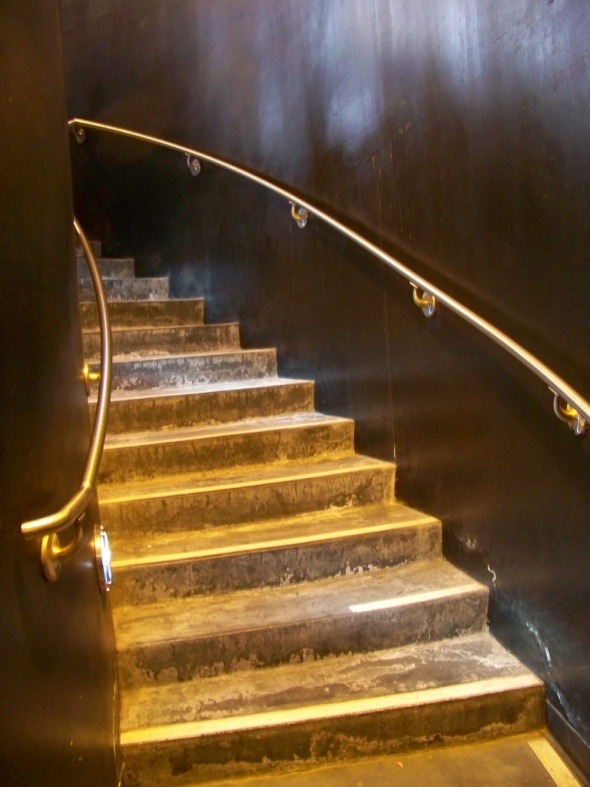 Passing through an underground tunnel, you’ll catch a glimpse of a land-wide map, with the “Rocket Rod Proposed System Expansions,” where the Tomorrowland Central Terminal (that’s where we are) should eventually connect with local sights like the Angel’s Stadium and the Orange County Convention Center.

But for now, your journey is round-trip. Ascending up from the tunnel, you’ll find that you’re at the base of the central pedestal with a staircase ahead leading up to the old PeopleMover loading platform. But now, the futuristic cadence of “beep-boops” and squealing tires suggests that the leisurely tour the PeopleMover offered in sincerely in the past.

The Rocket Rods themselves are strange – dark, to match this New Tomorrowland, but somewhat skeletal, like an intentionally-half-sketched concept. They seat five in an unusual 1 – 1 – 1 – 2 arrangement.

Once strapped on board, your Rocket Rod will inch out of the station and round the corner, facing a straightaway down the length of the land’s entry. A drag race style stoplight to the right indicates that you’re about to feel the force of this wild attraction, and as the stoplight changes to yellow, then green, the Rocket Rod squeals forward, racing straight toward the orbiting golden planets of the new Astro Orbitor. 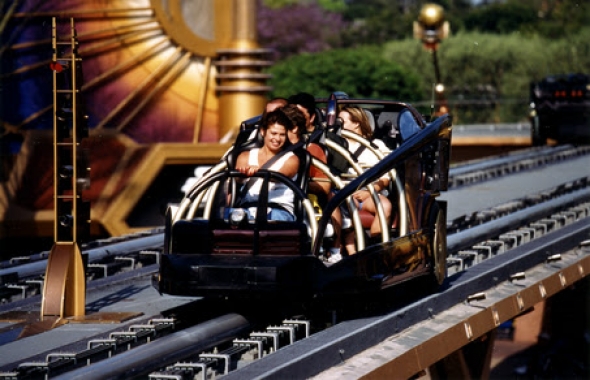 The acceleration is a thrill, with on-board audio systems simulating a high-pitched, electric engine revving. The Rocket Rod even lifts its front end as if the launch had resulted in a wheelie! Along this massive straightaway, you'll reach the ride's top speed – 35 miles per hour. As the Astro Orbitor grows closer and closer, you might think that you’re in for a thrilling near-miss where you’ll duck to the left in the nick of time and race away into the Star Tours showbuilding. Instead, the Rocket Rod begins to slow as it approaches the intersection before tackling the turn not much faster than the PeopleMover did.

But now inside, the vehicle aligns with a straight section of track and signals with a high-pitched beep before accelerating a bit and passing through the queue for Star Tours’ terminal in a few seconds, racing above the parked Starspeeder 3000 with C-3PO attending to it. As R2-D2 chirps, the Rocket Rod continues ahead, audibly powering up and down, up and down, as it navigates the twisted track designed for the PeopleMover through the Star Tours showbuilding and Star Traders gift shop.

Rounding the corner, the ride accelerates along a straightaway and under a glittering starfield before entering the bowels of Space Mountain. Where once this unique and surprising inner view of the roller coaster offered a chance for young people to see its starry experience, the Rocket Rods are now billed as an equal thrill, and the fleeting glimpse into the darkness is hardly enough to offer any idea of Space Mountain’s thrills. 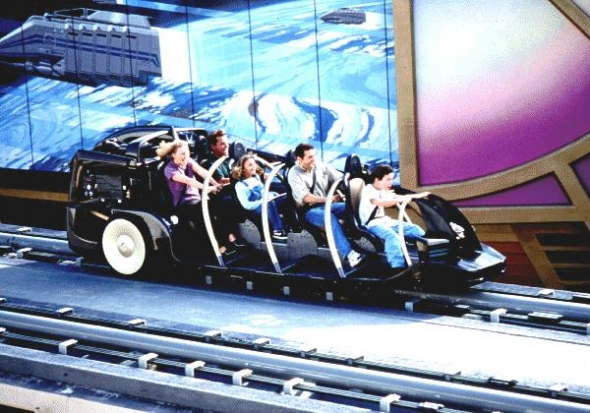 The Rocket Rods blaze out of the Mountain and along the rooftop of the old Mission to Mars theater-in-the-round (which closed in 1992 intentionally to begin being retrofitted into the Alien Encounter attraction that Tomorrowland 2055 would’ve called for. But in this New Tomorrowland, the attraction instead became a pizza restaurant). Then it enters the second level of the Carousel Theater (remember, now home to Innoventions) precariously curving around the back of the circular, revolving exhibit where windows look in on the tourists below as you speed past. (In the PeopleMover’s days, this unique view provided stunning looks at the EPCOT Progress City model that served as the Carousel of Progress’ post-show.)

Now free from the confines of the land’s showbuildings, the Rocket Rods can race off into the convoluted, twisting tracks that intertwine along the wild edge of Tomorrowland. Among towering trees, the tracks dart above and below the Monorail’s, racing over the idling gas-guzzling cars of the Autopia that putter along the rooftop of the drained Submarine Voyage. The Rods accelerate and decelerate against every dip and turn in the track. Precisely fed power bursts and brakes monitor its speed at each twist and turn.

Ahead, the Rocket Rods into the darkness in the rear of the old Circlevision building that now serves as their own queue. A burst of air and a strobe flash stand in for a finale as you pass large windows looking down on the guests below, who are just beginning their wait for the thrill ride. Then, the vehicle emerges back at the front of the land before the Astro Orbitor, turning back down the straightway from which it started. As a vehicle pops a wheelie racing down the track, your own Rocket Rods begins to slow and pulls back up to the pedestal.

Ready to see the Rocket Rods in action? Check out the point-of-view video embedded below. While you watch, notice how many times the ride falters and pauses as it recalculates block zones. You may also be able to "feel" how many times the vehicle jostles as it tackles the twists of the PeopleMover's track at a speed that's simply too fast.

Well, what’d you think? Maybe you agree that it was fun to traverse in three minutes the twisting route that took the PeopleMover over sixteen. And sure, the Rocket Rods are a fine aside for a day at the park, even if they don’t do much to compile a cohesive story for this New Tomorrowland they’re meant to anchor. You might even agree that they’re thrilling or – dare we say? – fun.

But you know what was not fun about this would-be E-Ticket? The two hour wait on even the most moderately attended days. Or the constant closures shutting the ride for days, weeks, or months. Or the abysmal New Tomorrowland it was supposed to headline. One thing is almost universally agreed upon by Disney Parks fans: the Rocket Rods were not worth the loss of the PeopleMover, even if they had stayed open.

What happened to sizzle Disney’s most disastrous ride ever? Let's finish off the story...