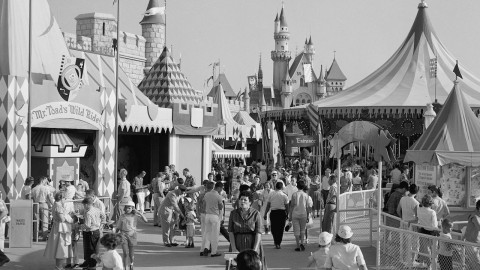 Since 1955, theme park fans have paid obsessive attention to the cost of admission to the Happiest Place on Earth. Critics assail The Walt Disney Company for raising prices consistently at the world’s original theme park (as well as its counterparts around the world). The problem with such critiques is that they’re always a bit disingenuous. Prices are never stagnant on any product. Yes, someone could purchase a ticket to Disneyland on opening day for only 50 cents, but they could also buy a Cadillac for $3,977. An entire house cost $22,000 on average. A hamburger and fries at McDonald’s cost a quarter. And the Disneyland price is a bit misleading. I’ll explain why in a moment.

Rather than take shots at Disney for constantly raising prices at their theme parks, let’s take this opportunity to explore how admission pricing has evolved over the years. How has it compared to the price of inflation? Are Disneyland increases in line with the cost of other products? How much of what we say in frustration regarding the price of admission is fair and how much is unfair venting? It’s a controversial topic, and the battle lines tend to become intransigent and hostile. Let’s remove some of the emotion from the discussion, taking a more analytical approach. Here’s my analytical evaluation of the price of admission at Disney theme parks over the years.

You didn’t walk ten miles uphill in the snow, grandpa 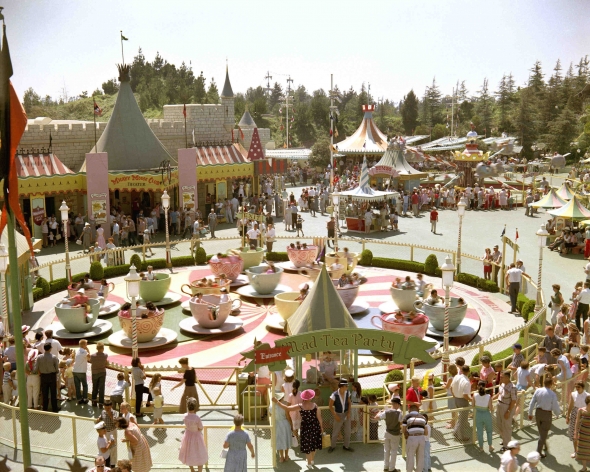 Let’s start with the lie posted above. Okay, lie is a bit harsh, so we’ll call it a mistruth. Yes, you technically could get into Disneyland on opening day for 50 cents. The catch is that you had to be a child to do so. Anybody whose ticket cost half a dollar didn’t pay. Their parents ponied up instead. Then again, given what transpired on opening day at Disneyland, odds are better that the person telling that story snuck in for free instead.

Perhaps we should focus on full price admission in 1955 instead. Adults paid a dollar to get in, and if that’s all they paid, they quickly grew bored. Each of 35 rides available on opening day came with a hidden cost. If you wanted to ride an attraction, you had to pay 25 to 35 cents per adult and 10 to 25 cents per child. So, the 50 cents or a dollar that bought access to Disneyland didn’t come with any additional access to the entertainment inside.

How much would a full day at Disneyland have cost? Let’s presume that a family with two parents and one child attended. If they wanted to enjoy every epic new attraction onsite, the grown-ups would have paid $8.70 each while the child would have cost an additional $5.15. That’s a grand total of $22.55 or just a touch over $7.50 per person. It’s a far cry from 50 cents. It’s also a factor of 7.5 larger than the dollar admission price. In practical terms, a day at Disneyland in 1955 cost $7.50 on average for a family but was $1.20 higher for adults.

Kids do NOT get in free at Disneyland 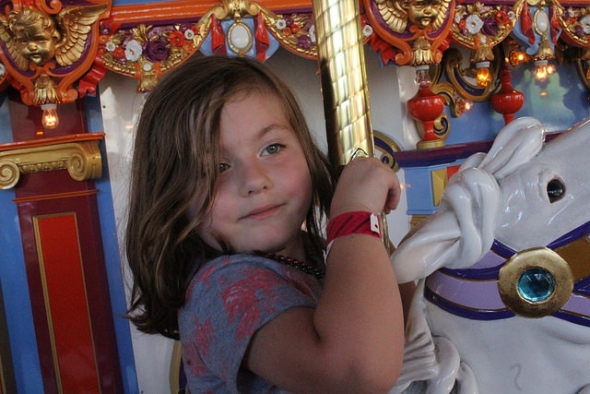 Let’s get ahead of ourselves just a bit and skip to the end of the page here. Single-day admission to Disneyland costs $95 during the offseason in 2016. That’s the absolute lowest price someone can pay for a single day at the park. Disney’s recent introduction of surge pricing muddies the picture a bit since Peak Season pricing spikes to $119, a 25 percent increase. So, we’ll perform high and low evaluations for comparison.

For children, the applicable numbers are $89 during the offseason and $99 during the Peak Season.

One conclusion you can already draw from the data is that Disney doesn’t discount children’s tickets the way that they did in 1955. They used to cost half as much for admission and had a realistic discount of roughly 40 percent including attraction costs. Today, parents save a feeble six dollars on the cost of offseason park admission and 20 percent during Peak Season.

The math here is fascinating. The American CPI adjustment calculator indicates that a dollar in 1955 is the equivalent of $8.99 in 2016 numbers. Rather than round up, we’ll use the precise totals so that nobody can claim that rounding was used to cook the books. Using this pricing data, that 50-cent ticket in 1955 is the same as a $4.50 cost today, which is cheaper than any movie ticket you can purchase in 2016. As indicated previously, that’s misleading, though. An admission ticket for the first year of Disneyland meant that a child could walk in the gates and do virtually nothing else.

What we want to do is compare apples to apples. That means admission with the practical benefits of a full day of park exploration. As previously indicated, if the child rode everything, they spent $5.15 in 1955. That’s $46.28 today. We can now draw a second conclusion based in fact. Disney has effectively doubled the cost of a child’s admission over the past 61 years. The numbers go up or down a bit depending on whether we use $89 or $99 as the baseline, but it’s fair to say that if we split the difference at $94, it’s a 102 percent price increase over time.

In my opinion Disney is for the wealthy, I currently have 6 foster kids ages 11 to 2 as well as my 2 teenage daughters living in my home, it would cost me just about 1,000 just to get in Disney for one day, not including food, drinks etc I really wish I could afford that but in reality I cant , these kids will probably never get to see in the inside of the parks for this reason alone

What's interesting to note is we don't have to pay for each ride. That's what make's up a bulk of the cost back in 1955. And even though this article talks about a single day ticket. You get a pretty decent savings for going multiple days. Obviously you wouldn't buy 4 single day tickets if you wanted to go to all the parks while you're down there. A 4 day pass is $81.25 a day which helps bring the cost down to about 73% of the original cost of a one day ticket.

So if anything. What's initially expensive is that one day ticket. The more days you go, the cheaper the entry fee is. Obviously if this article was about cutting costs it would go in detail about bringing your own food and drink..etc.

You're not paying for the land the parking lot is built on. You're paying for the trams, the lighting, the maintenance, the security, the cast members that help you park, the signage, and on and on. How much the land cost is irrelevant.