This is the Hidden Gem of Walt Disney World's Resorts. Here's Why You Need to Stay There. 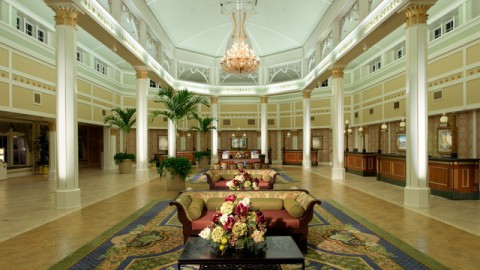 Selecting the perfect hotel for your Walt Disney World vacation is tricky. You have countless options onsite and at competing vendors in the surrounding area. Plus, vacation rental homes are a valid choice. If you want to stay at a Disney resort, thereby enjoying all the accompanying advantages such as the Disney Dining Plan and Extra Magic Hours, your budget could drive your decision.

Disney’s various All-Star Resorts all offer solid accommodations at the lowest prices the company offers. The monorail resorts and other properties close to theme parks provide amazing access to each gate, albeit at a hefty cost. Savvy consumers seeking something in Disney’s Moderate Resort class can split the difference, enjoying close proximity to the parks at a decent room rate. Out of the potential hotels, the most unheralded is Disney’s Port Orleans Resort – French Quarter, presumably due to its modest 1,008 rooms, less than half of what Disney’s Port Orleans Resort – Riverside offers. If you want to stay at one of the hidden gems of Walt Disney World resorts, here are six indispensable facts about Port Orleans – French Quarter.

The answer’s in the name here. Disney wanted to offer a tribute to the Louisiana charm of New Orleans. Founded in 1991, the resort originally offered three buildings and 432 rooms before eventually expanding to seven three-story facilities. The hotel combines antebellum style with southern charm. The tie-in with the French Quarter was tenuous prior to 2001. At that point, Disney rebranded the prior Dixie Landings Resort into Riverside, cementing French Quarter’s theme as a side component of the repurposing of both properties.

You’ll know that you’re at a New Orleans-themed facility the instant you spot the building. If the architecture and landscaping don’t drive home the point, the hilarious outfit worn by the greeter will. When you walk the grounds of the hotel, you’ll appreciate the courtyards and romantic vibe, something of a rarity at a Disney resort. Conversely, you’ll also have a hard time ignoring the fact that the building design choices at French Quarter make it the most motel-ish of anything at Walt Disney World. As a fan of New Orleans, this didn’t bother me, but I heard a few guests complain about the issue during our most recent stay. 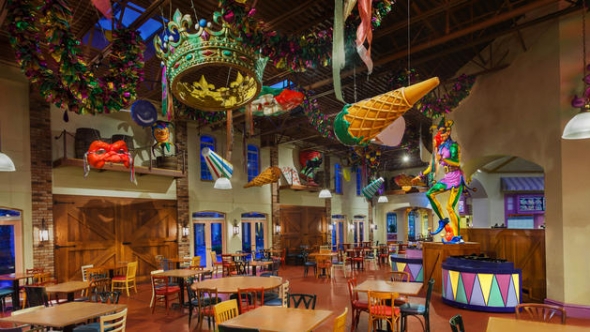 One of the most important aspects of the New Orleans lifestyle is good food. At the hotel, you can enjoy many staples of the Big Easy and the south such as jambalaya, fried chicken, and beignets. Their Chicken Parmesan Po' Boy is particularly decadent.

Fans of potent potables will not suffer disappointment while visiting imitation New Orleans. Scat Cat’s Club is a jazz lounge with a few appetizers to munch on and some fizzy adult beverages to take the edge off. The pool area offers Mardi Grogs, a Fat Tuesday-celebrating drinking establishment with several cocktails. It also has a couple of televisions if you want to watch the game while your kids swim. Note that this bar is land-locked rather than swim-up. 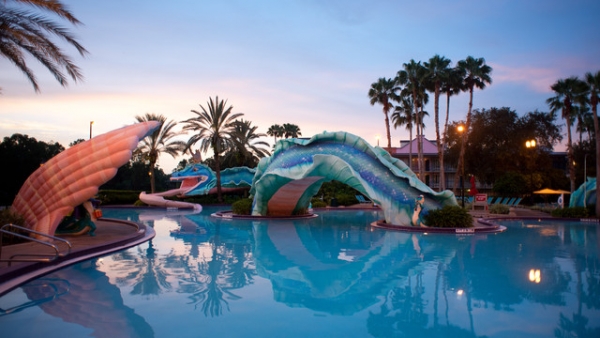 The primary source of hotel recreation is Doubloon Lagoon, a 225,000 gallon swimming pool. It’s got a King Neptune statue that had my wife quoting Anchorman all week. A band of musical gators is also a part of the theming. Finally, there’s a symmetrical sea serpent waterslide circling several parts of the pool. Any adult thinking they’ll enjoy it is in for disappointment, though. We watched several try, and I doubt that any of them were going as fast as three miles an hour by the end. A couple had to push themselves off the edge into the water. Conversely, kids absolutely LOVE that slide. We were worried fights were going to break out as children jockeyed for position at the front of the line.

In terms of other things to do, movie night is always huge at Disney resorts. French Quarter is particularly great due to the sitting options. It’s an open space with impeccable landscaping. Virtually every guest we watched approach the movie display stopped for a few moments to admire the surroundings. The overall aesthetic of this hotel is one that will linger in your memory for weeks after you leave.

We have stayed here twice in the last few years. The rooms are not huge but we Love the size of the resort and the pool area is fun for younger kids. The do activities by the pool daily which makes it a lot of fun. I would be happy to return there again.

I stayed there for a week. In fact I stayed in a room on the third floor facing the river in the picture posted. When I choose it was because it was the smallest resort on Disney property. For a Disney resort it smaller and very walk-able. The theme is great both inside and outside. The deluxe resorts have become unaffordable to me but I have stayed at the Polynesian and Contemporary several times.

French Quarter is my second favorite resort and would recommend it to anyone.

My favorite moderate is Caribbean resort due to the tropical themeing. If and only if you can get a room near the central hub where the food and services are offered. It's a very long walk from some rooms. The bus rides are long. Only stay here if you plan to spend some time hanging out at the hotel