A Wizard Ranks the Rides of Harry Potter 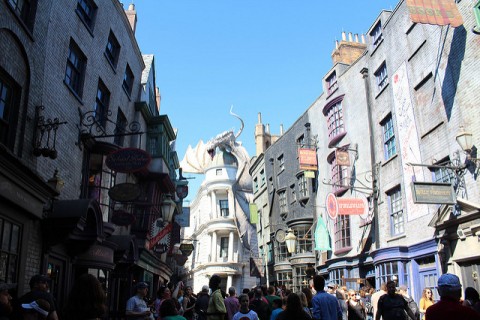 Hello, dear Muggles. It is I, Professor Minerva McGonagall, here to teach you about an important subject: Muggle rides at Universal Orlando.

Today, I would like to start you with the least magical of your studies: mathematics. Which number is bigger, 25.7 million or 44.9 million? How about 5.5 million or 9.6 million? These questions shouldn’t be challenging. Even my least talented wizards, Vincent Crabbe and Gregory Goyle, got them right, and they’re as dim as they are boorish and ugly.

The numbers in question reflect Universal Studios attendance in 2009 vs. 2015. Larger numbers are better, class. This isn’t your Muggle Golf, after all. In only six years, 19.2 million new theme park tourists determined that a visit to Universal parks was a good idea. In particular, Universal Studios Florida soared by 4.1 million, an increase of roughly 75 percent. What changed? Why, you know the answer, class! It’s that Universal added a little magic into your dull, gray lives.

In 2009, the hero of my people, a teen with a lightning scar on his forehead, became the subject of a series of new park expansions. You Muggles call it The Wizarding World of Harry Potter, and it’s reversed the fortune of NBCUniversal and their corporate overlord, Comcast. You non-wizards love to dress up in your magical accoutrements and pretend as if you possess the ability to cast spells, if only for a day. While wizards such as I have no use for your Muggle money, we bask in the attention, delighting in your reverence for our ways.

As a special treat for you today, I will take a look at the Wizarding World of Harry Potter, focusing on the five attractions that allow you to feel like a wizard. These are the ones that make you feel free from everything but the fear of Death Eaters and their leader, He Who Must Not Be Named. Obviously, as your special Wizarding Instructor, my opinions in no way reflect those of Theme Park Tourist. They are simply intended to foster discussion about what’s great about each ride as well as what could use a bit of improvement. Here, then, are one wizard’s rankings of the five major attractions at The Wizarding World of Harry Potter.

5. Flight of the Hippogriff

Ah, the noble and majestic hippogriff. This creature is the Wizard’s equivalent to both race horse and funny animal video. We breed the finest of the species professionally, and we fill our magical calendars with imagery of these breathtaking creatures. Frankly, the hippogriff deserves a better ride than what Muggle engineers managed with the Flight of the Hippogriff.

I can’t blame them, of course. Simulating flight is difficult without benefit of spells or hover charms. Still, the video above reveals the shame of this attraction. It’s over so quickly that a Muggle must feel as if they’ve been cursed with a time-advancing spell. The ride begins with a nod from the titular beast followed by ascension to the top of roller coaster tracks. The peak of this ascent is the highlight of the “Flight,” as it offers a breathtaking view of the Wizarding World of Harry Potter as well as the rest of the Muggle rides comprising the rest of the park.

Alas, that’s the lone highlight. From that point forward, it’s a fairly graceless descent through a series of twists and turns. Described as a junior roller coaster, it severely underestimates the Muggle youth of the world. Even they would find the ride itself dull. That view from the top, however, rivals anything you’d ever see while flying high during a Quidditch match. If only they could add a Golden Snitch…

We Wizards cast magical incantations. You Muggles use something called engineering to repurpose existing roller coasters into new, more Potterverse-ian ones. Take, for example, Dragon Challenge, an attraction that originally had a dragon-based name of Dueling Dragons. Apparently, these dragons needed a challenge, so they evolved Pokemon-style (yes, we Wizards know about Pokemon) into a Chinese Fireball and a Hungarian Horntail.

Nobody, not even one-legged Hiccup the Brave Viking, a hero from a different tale, could train these particular Hungarian dragons. Our local expert, Rubeus Hagrid, claims that they’re “seriously misunderstood,” but they don’t come by their reputation as the most dangerous of dragons by accident. As for the Chinese Fireball, they’re best known for their appearance in the doomed Triwizard Tournament of 1994. One prevented legendary Quidditch player Viktor Krum from scoring full points in his quest, thereby accidentally saving his life in the end. A teenager named Cedric Diggory was much less fortunate.

The ride that includes these two challenging dragons is my favorite kind of Muggle roller coaster. It simulates the ski-lift sensation of elevating quickly to the top of a mountain. The difference is that there is no mountain here. Instead, it’s a narrow roller coaster track featuring five breathtaking inversions, each of which will literally spin you for a loop. It’s a wonderful feeling held back only by the length of the ride. Muggle Metal Dragons must lose their breath quickly, as the ride is over after 100 seconds. Dragon Challenge is fine for what is, but the fact that the dragons no longer duel is problematic. This attraction’s more Wizardly changes actually took away some of its magic. That’s not how the process is supposed to work.