Are Parades at Walt Disney World an Endangered Species? 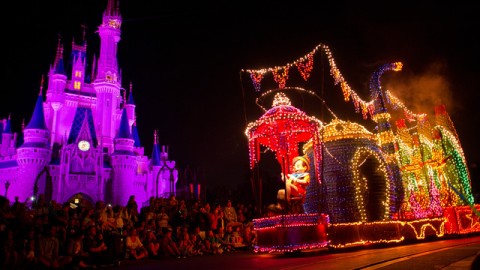 Everyone loves a parade, according to the old saying, and Disney had been no exception. Daily and nightly parades have been a staple at nearly all of its parks for years, and they've added to the fun atmosphere at the Magic Kingdom, especially. But many fans are wondering why Disney is continuing to pull the plug on parades and what — if anything — might be in line to replace them. Here's a look at the park's parades and what the future could hold for the celebrations:

A history of fun 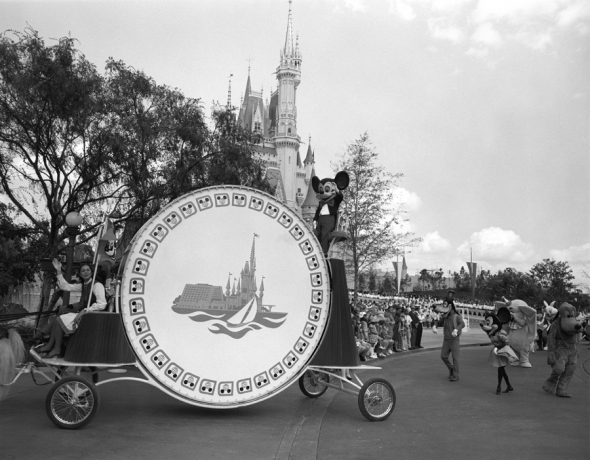 When Walt Disney World opened in 1971, the event was marked by Walt Disney World on Parade, an official dedication. Five thousand performers (including a 1,076-piece ceremonial band) marched through the Magic Kingdom and were led by Mickey Mouse, who was playing the largest bass drum in the world at that time. The performers, along with a big cast of Disney characters like Winnie the Pooh, Dumbo, the Aristocats, Thumper and Flower, packed Main Street U.S.A. to the delight of tons of fans who were sitting along the road near huge drums. At the end of the song "When You Wish Upon a Star," the drums were opened and 50,000 colorful balloons were released into the sky.

The parades in the years since may not have been quite so grand, but Disney made sure that every day at the parks felt like a celebration at least a couple of times each day and night. Fans still line up behind the yellow lines around 3 and 9 p.m. to be dazzled by elaborate floats, friendly characters and catchy Disney music. There have been some parades that have been held to commemorate events, such as Mickey's 50th Birthday Parade (held in 1978 to honor the mouse's first appearance in Steamboat Willie) and Donald's 50th Birthday Parade (held in 1984 to mark the duck's debut in The Wise Little Hen). There have also been some interesting limited-edition ones (like the one at the then-Disney-MGM Studios that promoted the ABC TV show Dinosaurs in the 1990s). 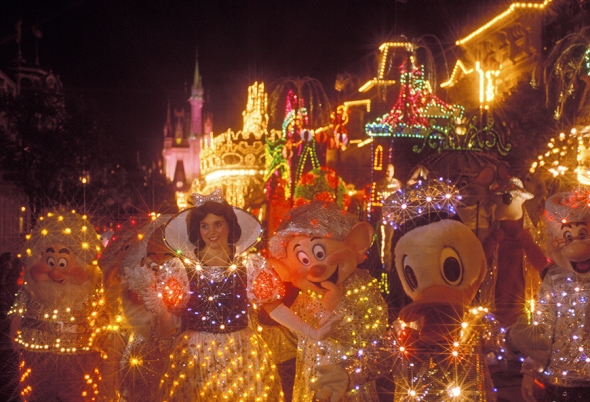 And Disney set the tone for many other parades at theme parks and beyond with its innovative displays. SpectroMagic, which ran nightly at the Magic Kingdom for two separate runs, from 1991 to 1999 and then from 2001 to 2010, made good use of fiber optics, which had been very technologically advanced when the parade debuted. SpectroMagic had scenes from Fantasia and The Little Mermaid, among other films, and managed to combine the emerging technology with very subtle beauty. After the parade was pulled so Disney could put a Summer Nightastic celebration in its place, fans thought SpectroMagic would be back. They didn't know that that night in 2010 would be the last time they'd ever see it. In 2013, it was confirmed that SpectroMagic was gone for good, and some reports have said that the parade's floats were too damaged by Florida weather to ever be used again. 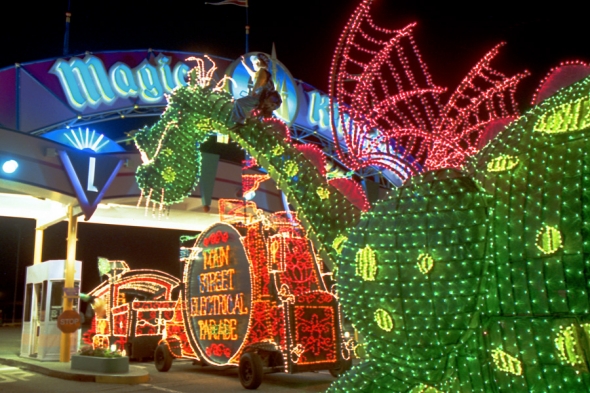 The parade that replaced SpectroMagic for the final time wasn't a new one by any means. The Main Street Electrical Parade made its debut at the Magic Kingdom in 1977 and ran until 1991 and again from 1999 to 2001. Its final run started in 2010. The classic parade has been known for its kitschy electronic "Baroque Hoedown" musical theme, and it's been enjoyed by several generations who flock to the Magic Kingdom to see the floats that shimmer with half a million LED lights. But this year, it was announced that the much-beloved parade will be taking its final trip around the kingdom in early October. Next year, the parade will appear at Disneyland for a limited time, but Disney has not announced a replacement for it at Walt Disney World. 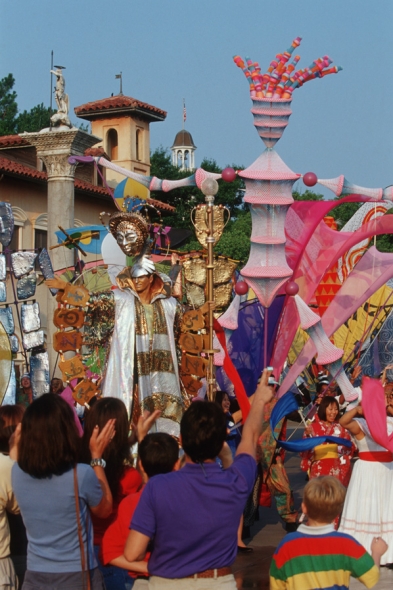 Parades at other Disney parks in Florida have disappeared in recent years too. The Pixar Pals Countdown to Fun and Disney Channel Rocks street show ended at Disney's Hollywood Studios in April 2013, and Mickey's Jammin' Jungle Parade had its last appearance at Disney's Animal Kingdom in June 2014. And Epcot, which seems like an ideal place to hold daily events that celebrate different cultures, hasn't held a parade in years. In 1982, a World Showcase Parade, with hundreds of costumed characters, musicians and dancers, came and went. In the later 1980s, an idea for a Festival of Nations parade was conceived but was never held, but in 1999, a new parade seemed more viable. Tapestry of Nations (pictured above) featured puppets like the ones from the Broadway version of The Lion King, and three separate parades took place simultaneously in three sections: from Mexico to Germany, Germany to Morocco, and Morocco to the United Kingdom. That parade proved to be so popular that its run was extended until 2003, but since that year, no new parades have been added at that park.

These days, if you want to see a parade, you'll have to go to the Magic Kingdom, where Disney Festival of Fantasy (which replaced the Celebrate a Dream Come True parade in 2014) appears each day at 3 p.m. and the Move It! Shake It! Dance & Play It! Street Party shows up at several times each day. If you're at the park during the holidays, you can see special parades during Mickey's Not So Scary Halloween Party and Mickey's Very Merry Christmas Party.