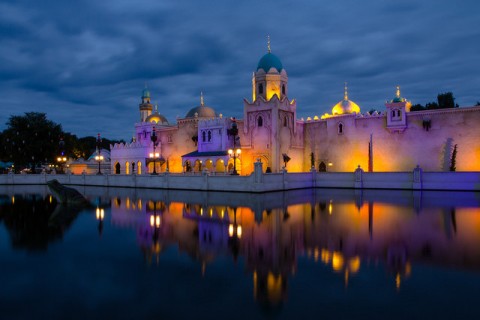 As Disney fans, we sometimes get a bit smug when it comes to themed attractions and shows. Walt Disney World and Disneyland both feature some of the most intricately designed and meticulously planned attractions in the world, and we feel as though our experiences with those attractions have given us a refined palate. We appreciate quality, and we know when something is shoddily done.

If you think I'm being ridiculous, think about the Fourth of July.

All around the country, cities and towns launch off fireworks to celebrate America's independence. But while most of the spectators are overawed by the sight, Disney fans are often nonplussed. “Sure,” we think. “These are OK. But, I mean, have these people seen Illuminations?!”

That skepticism defined the first two decades of the Walt Disney World and Universal Orlando rivalry – but now, after a lot of work, Universal has clearly proven it is capable of producing very high-end attractions.

But, Universal isn't the only non-Disney place that features such well-designed attractions. In fact, there are some scattered all across the globe – attractions that, frankly, would fit in perfectly well at any of the Disney Parks.

There are plenty spread all across the globe, but let's take a look at just five of these well-themed, Disney-esque attractions. And just to make things fun, we won't even include Universal.

In the late 1950s, Hurlbut partnered with Knott's Berry Farm proprietor Walter Knott in an attempt to transform his minor attraction into a leisure destination. His plan? Build themed attractions that guests would want to ride over and over again. In 1960, he opened his first hit: the Calico Mine Ride – a slow-moving train ride that took guests inside an artificial gold mine. It was one of the first dark rides built outside of Disneyland, and it was wildly successful, giving Hurlbut inspiration for a new attraction.

Having already explored the inner workings of a gold mine, Hurlbut wanted to design an attraction based on another iconic California industry: logging. While he originally envisioned the resulting attraction as a roller coaster, plans shifted, and it became the log flume we all know and love today.

Intricately themed to look like a 19th-century logging facility, complete with animatronic lumberjacks and taxidermied animals, the Timber Mountain Log Ride has been Knott's Berry Farm's most popular attraction since its debut. And, considering it inspired the Walt Disney Company to build Splash Mountain, it clearly has an unusually Disney-esque feel.

In 1992, the Walt Disney Company opened its now-infamous Euro Disneyland. While we all think of it as an initial flop due to Disney's lack of consideration for the cultural differences between the United States and France, at the time, it was actually quite a scary proposition for anyone running a theme park in Europe. Disney was the crown jewel in the industry, and the idea of that behemoth coming to the largest city in continental Europe had theme parks all across the region on edge. It wasn't just Disneyland Paris at the time, it was Euro Disneyland – a park for the entire continent.

In Amsterdam, Ton van de Ven had other plans.

Van de Ven was the creative director of Eftling at the time, one of the oldest theme parks in the world – predating Disneyland by three years. And while he and the Disney company actually were on good terms (Disney even consulted Eftling's management for advice in building their new park), he still wanted to make sure he had something special planned to open around the same time as Euro Disneyland.

What van de Ven came up with was nothing short of astonishing: Dreamflight.

Although it ultimately was delayed until 1993, Dreamflight opened and was unlike anything that came before it. Eschwing narrative and plot for mood and feeling, Dreamflight uses Peter Pan-esque flying cabins to take guests on a journey through a dreamscape featuring castles, faries, and all kinds of expressionistic images. It's so creative and so beautifully designed, you could put it in the middle of Walt Disney World's Fantasyland tomorrow, and no one would know the difference.

It is important to notice that Efteling is nowhere near Amsterdam, it's a 1,5 hour drive from there.

aybe Amsterdam is the only place you know in The Netherlands but the Efteling is located in Kaatsheuvel, a small town not to far from the border with Belgium and nowhere near Amsterdam.