This is What You're Missing at Shanghai Disneyland. And it's Pretty Freaking Amazing 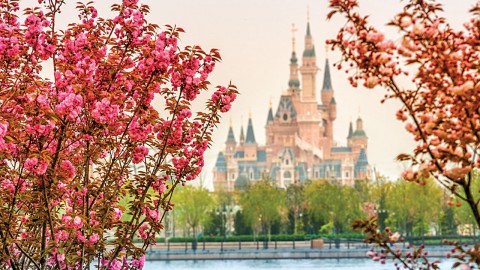 Adventureland, Frontierland, Fantasyland, Tomorrowland… You know the drill, right? Until now, there have been five Disneyland-style parks around the globe, based very closely on the original Disneyland in Anaheim, California. Now, more than 60 years later, for the first time in a very long time, a brand new Disneyland is here. And this one might change everything.

In just a few days, Shanghai Disneyland will have its Grand Opening celebration, bringing a Disney Park to the people of Mainland China for the first time ever. Like its home country, the secrets of Shanghai Disneyland were closely guarded. Now we know why. After the disappointing reveal of the miniature, budget-built Hong Kong Disneyland more than a decade ago, Imagineers went big on the Shanghai park, obliterating most of what we know about how “castle” parks are supposed to look and feel and the stories they’re supposed to tell.

Despite some odd news stories as the park struggled to adapt to Chinese customs and customers (and vice versa), one thing is for sure: Shanghai Disneyland could change everything about Disney Parks: New Lands; reimagined, reinvented versions of the rides you know and love that we’ll call New Classics, and completely original, Shanghai-exclusive New Adventures. Today, we’ll explore all three as we dive deep into Shanghai Disneyland and point out the incredible, unimaginable new concepts and stories that await within – some of the best rides Disney has ever designed. You might want to open Shanghai Disneyland's interactive park map to follow along with us.

As with any Disneyland-style park, it all begins in themed lands radiating out from a storybook castle in the park’s center. But before you go assuming you’ve seen this all before, take a look. We’ll begin by looking at the completely new lands that live here, all vastly different from what you’ve seen before. 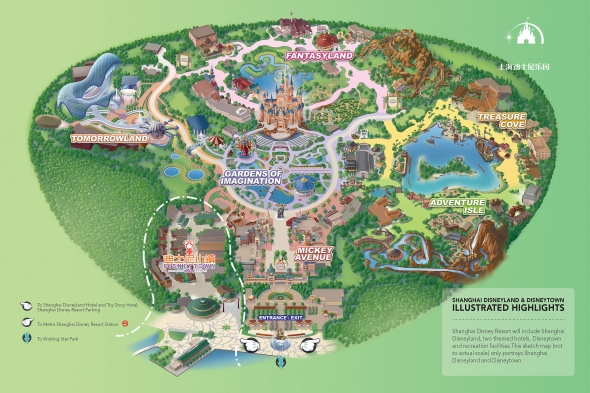 At every Disneyland-style park on Earth, your journey begins on Main Street, U.S.A., a charming turn-of-the-century Midwestern American town loosely based on Walt’s hometown of Marceline, Missouri. It’s a quaint and timeless look at a period of American history forever frozen by nostalgia and simplicity: a time when the electric light and the gas lamp co-existed; horse-drawn streetcars and “horseless carriages,” popcorn lights, markets, and more.

Turns out, though, that the Chinese don’t get the warm-and-fuzzies from vintage Americana. They don’t even have a sort of revered wonderment of it like Europeans or the Japanese. Main Street, U.S.A. would not do here, so instead you’ll find Mickey Avenue. Mickey Avenue fulfills the typical roles of an entry land (no rides; just food, shops, snacks, and meet-and-greets) while also providing a necessarily introduction for the Chinese to Disney characters they may have missed thanks to China’s longstanding icy freeze on anything too American (with Disney being high on the list). 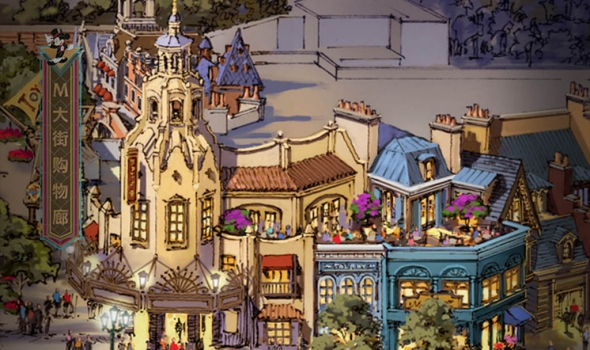 This short streetscape, then, is made up of “cartoon” shops that look like an architectural mix of Main Street and Micky’s Toontown, “operated” by Donald, Chip and Dale, Goofy, Daisy and the crew, plus Remy’s Patisserie, and the Carthay Circle Theater (its third Disney Park iteration after a souvenir shop at Hollywood Studios and its park-icon status at Disney California Adventure). While Shanghai Disneyland does not have a train that circumnavigates the park, entering guests still pass beneath a beautiful, elaborate train station – this one a mix of art nouveau with the DNA of the park’s Enchanted Storybook Castle. 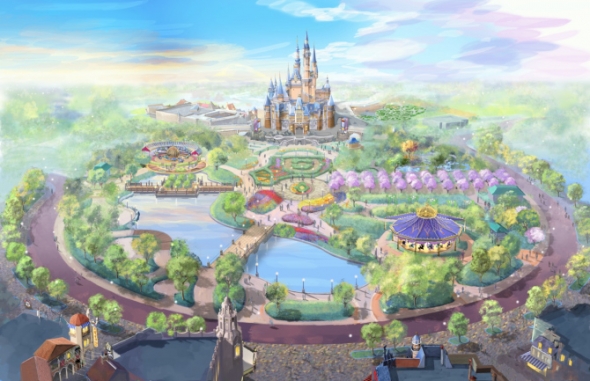 The second original land at Shanghai Disneyland is the Gardens of Imagination. A giant, forested circular hub before the castle, this garden is meant to be an elegant and peaceful area of bubbling pools, glittering trees, and colorful flowerbeds... and fulfill the Chinese government mandate that this park appeal to their elderly citizens.

(Most of Shanghai Disneyland’s park lands are much more consciencious of story and setting than the hodge-podge of mixed styles and stories at other Disneyland-style parks… think more along the lines of Islands of Adventure, Animal Kingdom, or Disney California Adventure, with each attraction in any given land part of the same time period, style, and overarching story… Since Fantasyland is united under one style and story and looks like a realistic storybook village, a dozen circling Dumbos attached to metallic arms simply wouldn’t do. Instead, these two outliers are at home here in the Gardens of Imagination.)

The Gardens of Imagination are also ‘distinctly Chinese,’ with a gorgeous spot called the Garden of the Twelve Friends. Therein, each animal of the zodiac is represented by a beautiful tile mosaic of a Disney character, set along a pink-tree-lined straightaway leading to the park’s central hub.

It should go without saying that the icon here is the Enchanted Storybook Castle, Disney’s largest castle ever and the first to not be associated with a particular princess. 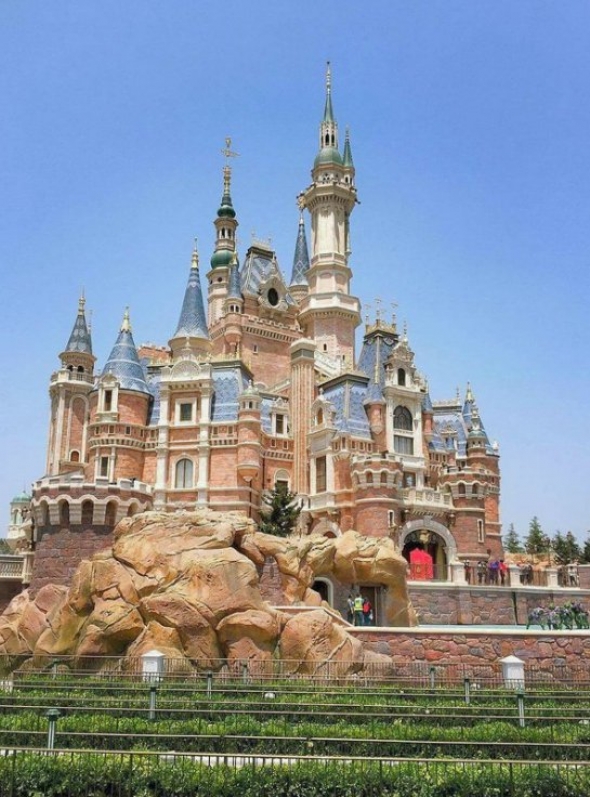 The 197-foot-tall castle (just two feet shorter than Disney World’s imposing Hollywood Tower Hotel, mind you) is beautiful and unlike any other Disney Parks castle: made of warm brick with towering royal blue sloped turrets like something out of Merlin’s realm. There are also a few hypnotic towers that are an oxidized green-copper, like the rusted domes of California’s Tower of Terror with echoes of the exotic shapes of Hong Kong’s Mystic Manor. The dusky castle is gorgeous, as evidenced by the photos posted here. 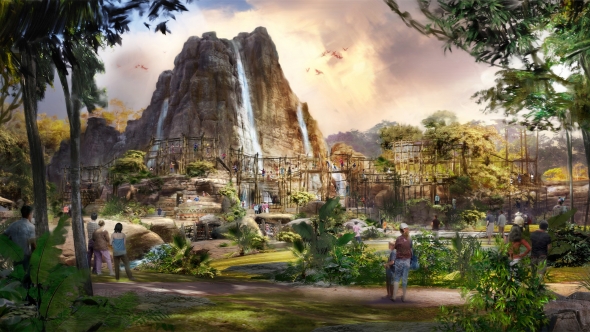 Dateline, 1935. The Leagues of Adventurers’ journey around the globe has been cut short thanks to a wayward wind blowing their ship off course. Deep within a lost tropic archipelago, they’ve discovered a place long believed to be only a myth: Adventure Isle. Home to the harmonious Arbori people, Adventure Isle is a lush island filled with wonder and intrigue, and the League of Adventurers now invites you to join them in exploring the mysterious island.

Certainly an evolution of Disney’s Adventureland, this new incarnation borrows in equal parts from the mythology of Indiana Jones while simultaneously echoing the global expeditions of the Society of Explorers and Adventurers (S.E.A), the cross-continental frame story that unites Disney Parks rides across the globe into one overarching story.  It also does away with all the Adventureland go-to attractions: there is no Jungle Cruise, no Indiana Jones Adventure, not even an Enchanted Tiki Room. Instead, it’s an original story and an original place, with all of the land’s attractions united in one time period and one exotic locale. 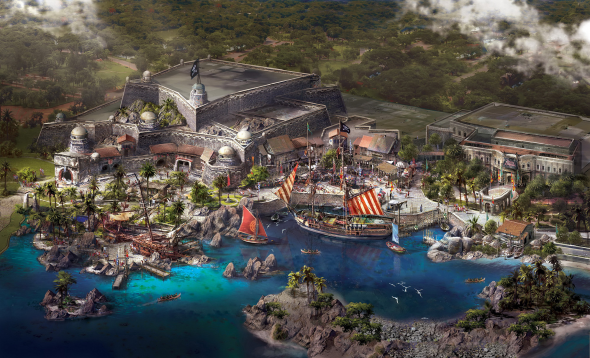 Since their debut at Disneyland in 1967, Disney's cast of rascals, scoundrels, villains, and knaves have been a mainstay of Disney Parks. When Magic Kingdom opened in 1971, visitors were so concerned with finding the "pirate ride," Disney cancelled plans for a cowboy-themed replacement and fast-tracked a miniature version of Pirates for the Florida park. Their popularity has only grown since the re-introduction of the cast in the Pirates of the Caribbean film franchise that debuted in 2003, with no signs of slowing today.

Finally, Shanghai Disneyland gives the Pirates of the Caribbean their own land, based on the settings, stories, and characters from the films. Modeled very picturesquely after an 18th century harbor town located on a Caribbean isle, this land is perhaps the most exploration-worthy of all of Shanghai's immensely detailed lands. It's packed with nooks and crannies that beg to be explored, with big payoffs for those willing to take their time. It seems downright certain that any Disney Park built from here out will have its own dedicated Pirate land, and in Shanghai, Disney knocked it out of the park on their first try. Click and expand the image above to see just how detailed this land really is, easily on par with DisneySea's best.

Even more impressive than the land itself are the attractions within, but we'll get to those in just a minute. 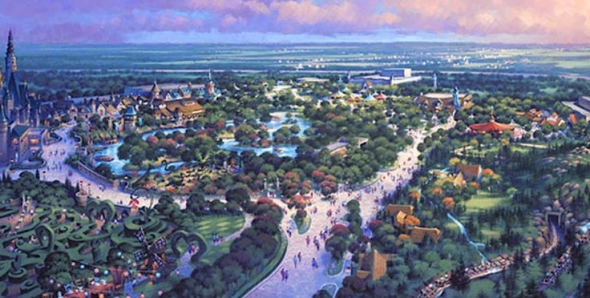 The fifth of Shanghai’s six themed lands, and we’ve finally arrived at a familiar face. Or so it seems. But Fantasyland here is quite a bit different than the one you know. While all the other Fantasylands at Disneyland-style parks are courtyards beyond the castle, often extending out to the east and west, this is a bit different. Walking through the Enchanted Storybook Castle, you emerge on a stone balcony, overlooking a forested lagoon. The path splits to the left and right. Fantasyland here is a loop that circles around this central forested waterway.

Moving clockwise around the land, you’ll pass through a “Storybook” village that’s a mix of European and fantasy architecture, then by the Tangled Tree Tavern, a Hundred Acre Wood mini-land, and then past the grassy slopes of the Seven Dwarfs Mine Train. Most every attraction here is either original or a stark re-invention of a classic. We’ll get to that in just a few minutes…

From 1955, Disney Imagineers have been trying to decide what the future will look like – not an easy task (even if they’ve gotten it surprisingly right more often than not)! In the 1990s, spurred by Disneyland Paris’ timeless, retro-futuristic Discoveryland, Disney set out to change Tomorrowland across the globe. No longer would they try to predict actual scientific advancement or real possibilities for the future. Instead, they’d be “timeless” visions of tomorrow rooted in the past. In Magic Kingdom, a sci-fi alien spaceport as envisioned by 20th century pop culture; at Disneyland, a fantasy future as envisioned by 19th century European visionaries. (By the way, even if they’re technically “timeless,” both have, to varying degrees, lost their luster just a few decades later.) 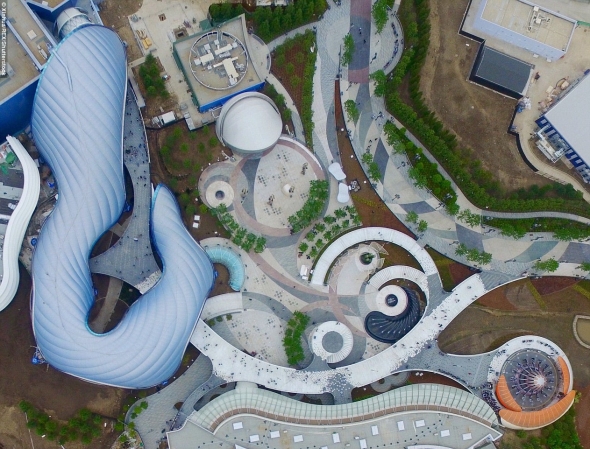 With Shanghai Disneyland, Imagineers really set out to make Tomorrowland timeless by abandoning place and time altogether. More akin to something you’d see in the Tomorrowland film, this Tomorrowland doesn’t try to be a “real” sci-fi city or to base itself from some concrete past viewpoint. It’s simply a modern marvel of glass canopies, curves, elevated pathways, manicured gardens, geometric water fountains, and silver supports. Whether or not this abstract version of tomorrow can last, we just don’t know. But at least it can’t be damaged by its own ambition (Florida), lose its concept thanks to intellectual property (France), or depressingly void of life and story (California).

But what about the rides?

So all six of Shanghai Disneyland’s themed lands are, to varying degrees, entirely original concepts, designs, and styles absolutely unlike anything else you can find in the US, Europe, Japan, or Hong Kong; new stories custom-built to provide new adventures. And as you might expect from such a brave change in layout and lands, Shanghai Disneyland follows through with entirely new versions of your favorites and brand new, never-before-seen rides. Read on…