Disney Fans Fought to Save This Wild Ride... And Lost. Here's Why it Was Shut Down Forever.

Mr. Toad’s Wild Ride may have been an outlier at Disneyland – themed to a lesser-known character from a 1940s package film. But that didn’t mean he wasn’t loved. Today, for example, Mr. Toad is an obscure figure from Disney's backlog, about as recognizable to children as Clarabelle Cow or Ortensia. Certainly most children have never heard of him by way of his movie. That gives his Fantasyland dark ride at Disneyland a sort of “original story” mystique, quite different from his neighbors, Peter Pan and Snow White. And given Disneyland's intensely local, generations-long guest makeup, that means he's something of a mascot for the park.

Of course, if the ride proved itself at Disneyland, then it certainly needed a place at Disney World, too. When the new Magic Kingdom opened in October 1971, it included Mr. Toad’s Wild Ride. But this expanded version of the classic dark ride had a few major changes. The most significant? Dual tracks. Two loading areas each dispatched jalopies into the ride, with each separate track experiencing entirely different ride scenes, meeting up at specific points through the ride!

The gargantuan dark ride was designed in an intentionally “cartoon” style that closely matched the multiplane camerawork of many early Disney animated films. 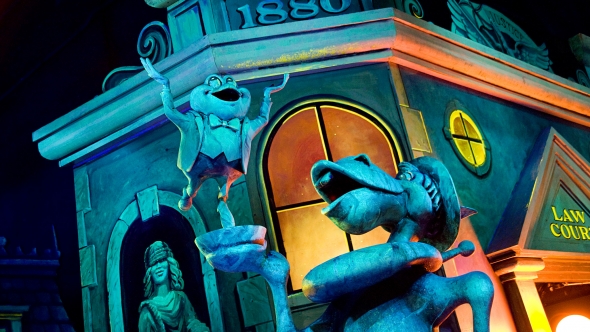 Boarding the ride via the “Right Track,” you'll need to hold on tight – once the car starts, the race is on! At once, the car whips around the corner into the stately cutout exterior of Toad Hall and passes through a grand, wallpapered Entrance Hall. Ahead is a proud stone bust of Mr. Toad himself. Of course, the mayhem has to start somewhere, so after a brief glimpse of Toad's ode to himself, the motorcar accelerates toward a flickering fireplace and bursts right through it into the manor’s stately Library!

As Toad's friends duck behind desks, suits of armor topple toward us. The car chugs ahead, driving headfirst into a towering bookshelf and breaking of the manor into a barnyard full of sheep, cows, and pigs. Seemingly with no path forward, we plunge into a pile of hay, bursting out to find ourselves nose-to-nose with a fuming bull standing guard over the farm's cows. We seem to have taken a farmer by surprise, as he falls backwards, yanking a rope that sends a haypale falling right toward us!

Here's a memorable moment: the car drive through the wooden doors of a barn only to unsettle a chicken coup. In the darkness, dozens of chicken circle around, clucking as they fly.

Racing out of the barnyard, neon glowing signs catch our eye... What do they say? "Danger." "Road Construction" Do Not Enter." "One Way." And what's that head? A car heading right towards us! (Cleverly, this oncoming car is from the “Left” track – our first encounter!) At the last second, the motorcar pulls off to the right and into the charming Central Plaza of a quaint English town. This large Central Plaza set is where the two tracks converge, circling around a central stone fountain, past police officers whistling frantically, and past spinning, lopsided directional signs pointing toward “Nowhere."

The car makes a quick turn out of the Central Plaza and into a courtroom, where an angry sheriff sentences us toward the jail with some no-good weasels locked away. Escaping from the jail cell, the car enters into a shootout between the policemen and the weasels. In a race to escape, riders burst through a railroad crossing gate and turn into a dark tunnel. What’s that up ahead? It can’t be! A train heading right for us! In one of the most classic dark ride maneuvers ever, an oncoming train light suspended by an overhead track produces the simple and effective sensation that we’re done for!

And, if you can believe it, you were right! There’s no last minute escape on this ride. The darkness gives way to reveal that you’re… well… in Hell. As painted flames illuminate gnarled, jagged red rocks, tiny red demons holding pitchforks laugh and bounce, their eyes shining green. Then, Satan himself rises from behind a molten rock, pitchfork in hand.

Ahead, doors swing open as the car makes a final advance back to the loading dock.

The “Right” track of Mr. Toad’s Wild Ride is a hoot, and has almost nothing in common with the Disneyland original. Even shared rooms like the library and the town square and the underworld look and feel completely different on this wild chase. And that’s only half of it! Before we move on, check out this spectacular on-ride video of this half of Mr. Toad's Wild Ride:

Imagineers must've doubled Mr. Toad's Wild Ride into two separate tracks at the Magic Kingdom to double the popular ride's capacity. What they didn't expect is that guests would catch on to how each side of the ride was almost entirely unique and opt to ride them both! Brilliantly, guests aboard the "Left Track" will encounter some of the same settings and even physically enter the same scenes, but all from a new perspective.

Aboard the left track, cars enter Toad Hall as before, chugging through the Entrance Hall to view that wonderful stone bust of Toad. Ahead, you may even spot riders from the other loading dock busting through the fireplace and into Library, but aboard the “Left” track, we pivot in front of the statue and head further into the manor: into an impressive Trophy Room full of exotic cartoon animals mounted between elegant tapestries, then into the Kitchen, causing quite a fuss and breaking more than a few plates.

Breaking out of the manor, we drive ahead into the woods and pass by a Gypsy camp with a dozen dancers and performers. Their ornate wooden wagon is dead ahead – but not for long. Our wild motorcars break right through their wagon only to find a one-way street beyond... with a car heading right toward us! At the last second, the car zooms left and enters into the beautiful Central Plaza of town, now mingling with riders from the "Right Track." They break off of the plaza and turn right into the courthouse, but we have a different destination in mind: Winky's Tavern, just ahead!.

As the car bursts through the door, the bartender ducks out of the way, leaving his mugs spinning in mid-air! The jalopy jolts into the storage room behind the bar, stacked high with shelves upon shelves of wooden barrels. Those dastardly weasels are hiding among the barrels waiting to give us what-for, so we rush out into the misty countryside passing by Ratty’s house. Up ahead? A railroad crossing.

Despite the flashing lights, the car breaks right through the crossing gate and turns left... right onto the railroad tracks! The car sputters into a dark tunnel when suddenly, the blinding headlight of a locomotive races forward! Before we know what hit us, doors split the darkness ahead and open into... you guessed it... Hell. Steaming rocks, laughing demons, and Satan himself. As before, a benevolent force shows us the exit as the motorcars press forward and back to the loading area.

So let’s get this straight – after the success of Disneyland’s Mr. Toad’s Wild Ride, Imagineers exported the idea to Florida where it was expanded into two very separate, very different dark rides, each as fun as the last and neither borrowing much of anything from Disneyland's. The frenzied fun of Mr. Toad’s Wild Ride sent guests zooming through elegant dark ride scenes straight from the animated stylings of the 1940s, included classic gags and large-scale scenes, interactions between two separate tracks, and sent guests to Hell (literally) for a face-to-face encounter with the Devil himself.

Even if Mr. Toad's Wild Ride was loosely based on the original Disneyland dark ride, this one was sincerely one-of-a-kind. And talk about character! 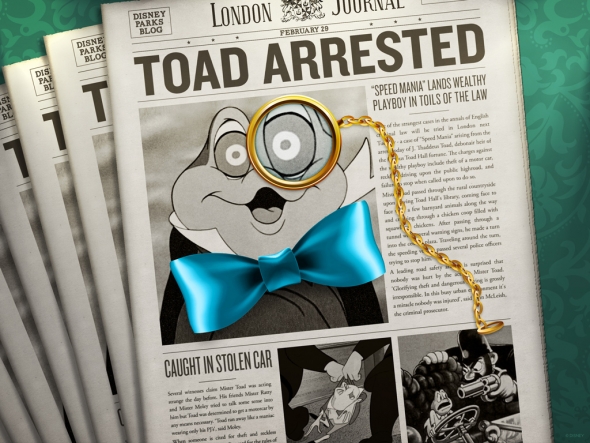 Worlds away from the fanciful elegance of Peter Pan’s Flight or the intensity and darkness of another Lost Legend: the original Snow White’s Adventures, Mr. Toad’s Wild Ride was a quirky, funny, and yes, wild ride that felt nonsequitor, zany, and a little bit mad, like Toad himself.

In the mid-1990s, Disney executives must’ve taken a second look at the showbuilding housing Mr. Toad's Wild Ride and caught something important: the double tracks meant that Mr. Toad took up more space than a typical dark ride. Put another way: Mr. Toad's showbuilding was large enough to contain a single, regular sized dark ride and a gift shop.

And luckily for them, a tubby little cubby all stuffed with fluff was just beginning to re-enter public consciousness after a brand revival... A character with some serious merchandising clout and an agreeable, storybook personality perfect for Fantasyland was making a big re-entrance into pop culture. Winnie the Pooh needed a dark ride and a gift shop.

Find out what happened and, most importantly, how, as we close Mr. Toad’s chapter on the next page…

We rode it in 1996, and it scared my 3 year old nearly to death! The rest of us (two adults and a 9 year old) loved it. For the 9 year old, riding it without being scared felt to him like a rite of passage. He was so hoping for the time when his younger brother could ride it without fear. *sigh*