You've Met These Characters Before. But Did You Know Their Dark and Dreadful History? 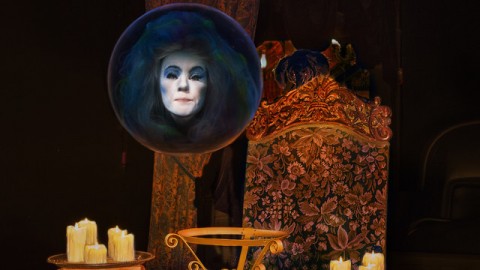 “Welcome, foolish mortals, to The Haunted Mansion. I am your host, your GHOST HOST. Kindly step all the way in, please, and make room for everyone. There's no turning back now.”

These are the words I utter each time you humans inhabit my playground for a time. You enter my Doom Buggies, and you watch the macabre proceedings. Then, you try to leave, ignoring me when I tell you that there’s always room for one more. I laugh mirthlessly for I know all and see all. I am the proprietor of your favorite establishment of any Disney theme park. And I can tell you that most of the stories in my home mirror my own. They didn’t have happy endings.

I’ve previously relayed details of the sordid history of The Haunted Mansion. I lamented the genesis of the park. Even I, a dweller of an unholy realm, regret that Walt Disney never lived to see the attraction he envisioned. In his absence, able-bodied Imagineers fell victim to the curse that felled me. For the body of a decade, they struggled to introduce outsiders to the horrors of my New Orleans Square plantation.

Eventually, Disney’s finest disciples succeeded but their house remained divided. After The Haunted Mansion opened at Disneyland, guests expressed the same confusion that had once caused a schism inside the Disney offices. No one could quite decide whether to laugh at the interior of my home or fear the residents inside. That’s understandable. My motley crew is a veritable rogues gallery of rapscallions along with a few innocents condemned to co-exist in a far from peaceful (but oddly musical) manor.

Since I’ve already told you how the pieces came together, I’ll stave off the boredom of the 1000th playing of Grim Grinning Ghosts today to fill you in on another part of my home. In this article, I’d like to introduce you to many of the unforgettable ghost and ghasts who dwell in this eternal place alongside me. Think of this article as supernatural social media. You’re about to receive 999 friend requests. Decline them at your peril.

Here then are the stories of the most notorious residents of Disney’s Haunted Mansion.

Not to be confused with Uma Thurman 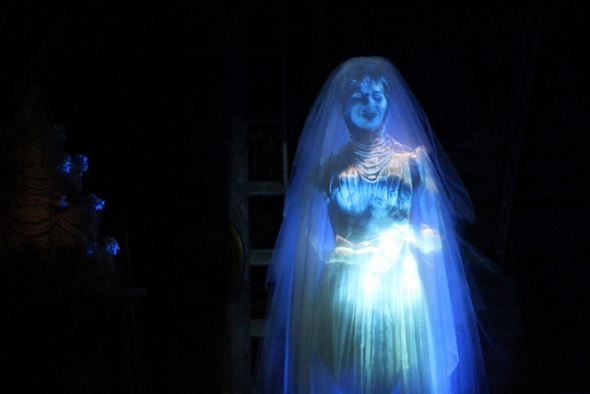 Some marriages last until the end of time, and some end in divorce. A secret option number three exists, and it’s the most popular one in my realm. A scorned (or merely malevolent) spouse can end their holy union in the unholiest of ways. And this sort of murder most foul leaves an indelible impression on strangers. That’s why everyone remembers The Bride, and I don’t mean the one who wanted to Kill Bill.

Originally, the Bride was a mysterious figure who lived in the Attic portion of The Haunted Mansion. Over time, she gained a name, but let’s focus at first on the early days when she was simply a mourning widow.

One of Imagineer Ken Anderson’s jobs at WED Enterprises involved the creation of concept art for The Haunted Mansion. He crafted the backstory for many of my cohabitants at our evil dwelling. The Bride was one of the most intriguing of these early offerings.

Anderson envisioned a tragic life for the woman he called Priscilla. She would regrettably marry a wayward gentleman known as Bartholomew Gore. The union was a happy one for a time. Then, Priscilla happened upon her husband’s darkest secret. He lived a pirate life indeed. Rather than explain his side of the story as well as how happy he’d become as a law-abiding citizen, Gore instead returned to his evildoing ways. He mercilessly murdered young bride Priscilla, leaving her in a final repose. Or so he thought. 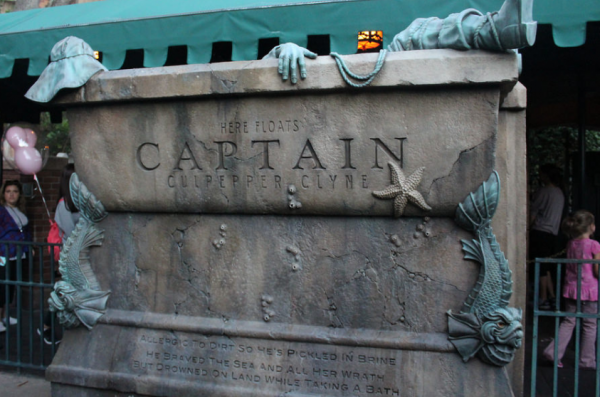 Instead, the horror of her fate caused the wife to linger in the earthly realm rather than abandoning her mortal coil. Priscilla haunted Bartholomew Gore ceaselessly. She allowed her killer no respite from the hauntings. Eventually, Gore felt he had no other choice. He ended his own life to escape the torment of his dead but omnipresent wife. The element of his death was later adopted…well, I’m getting ahead of myself as the Ghost Host. Let’s save that revelation until the end.

Anderson’s cohorts at WED Enterprises expressed conflict over the nature of Gore and Priscilla’s relationship. They felt it was a bit too dark for a theme park attraction that children would visit with their parents. Once again, the debate about humor vs. horror impeded the progress of The Haunted Mansion.

Undeterred, Anderson took another shot at the same character. Gore evolved from pirate to sea captain. His new profession still caused his death, albeit in a much different way. Rather than Priscilla, Gore was now married to the sea.  A shipwreck caused him to drown at sea. Anderson sketched out some ideas for Gore’s appearance that went unused as Disney never actually provided admittance to him in The Haunted Mansion. Instead, his history became that of Culpepper Clyne, the Mariner covered in seaweed and starfish. Gore went from pirate to murderer to suicide victim to sea captain to persona non grata. My home offers many cruel twists of fate, but banishing someone from existence is harsh even by our standards.

Still, haunted spirits are hard to keep away forever. Gore has started making a comeback in recent years. The 2011 update of The Haunted Mansion at Magic Kingdom included a new tombstone commemorating the life of Captain Gore. Similarly, the recent comic book version of The Haunted Mansion includes a nefarious fellow named The Captain as the main protagonist. He claims a similar heritage as Mr. Gore, and the comic goes so far as to recreate a scene based on Ken Anderson’s earliest rendering of the captain. One of the most important rules of my realm is that nothing stays dead forever here, even if it doesn’t necessarily exist at the moment. A second story similar to this one is included below. It involves a man, a hat, and a box. Let’s finish our discussion of Priscilla the Bride first, though.

Say yes to the dress 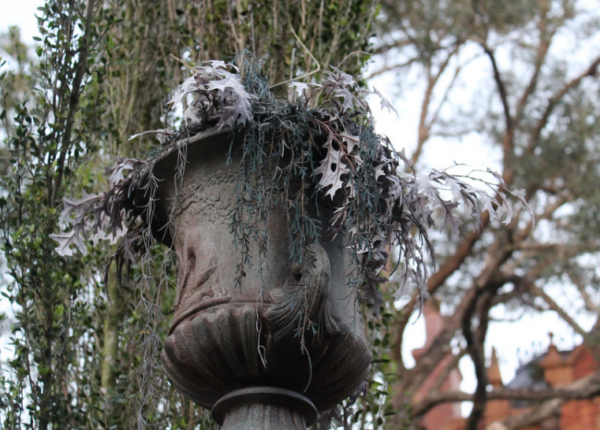 With her barbaric groom out of the picture, the Bride received a makeover. It would be the first of many across theme parks and other media outlets. Originally, she held a candle in one hand and a bouquet of wilted, long dead flowers in the other. Her most memorable feature was the beating heart clearly visible through her wedding dress. In fact, the blueprints for the ride referred to her not by name or by the Bride. Instead, they simply called her Beating Heart.

The popularity of the vengeful, scorned bride caused Disney designers to re-think her anonymous existence. Priscilla had morphed into the Bride, but Disney felt they could do better with the details. Enter Constance Hatchaway.

Flipping the switch on the original story of Priscilla, Hatchaway earned a reputation as predator rather than prey. Colloquially known as the Black Widow Bride, this woman wasn’t someone men should trust with their hearts. Anyone who made that mistake paid for the mistake with their life.

Oh, well done! This article from the Gjist Host himself is nothing short of exceptional! I hope you didn't use a ghost writer.