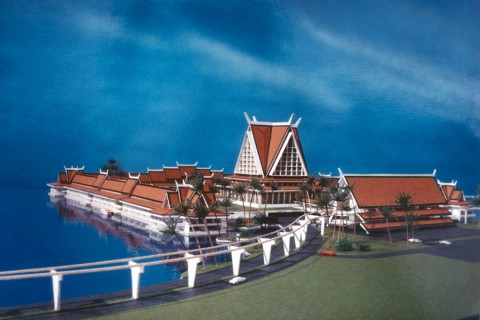 Currently, on the Walt Disney World property there are about 30 hotels and resorts, most of them owned and operated by Disney. These hotels vary in price, room size, and, most importantly, theme. Depending on which hotel you book, you can sleep in a Polynesian bungalow, an African safari lodge, and even a rustic cabin in the woods. But while there are many hotel options today, guests may have had a chance to stay at five other Disney hotels that were planned throughout the years. Let's take a look at these long-lost resorts that never made it past the drawing board. 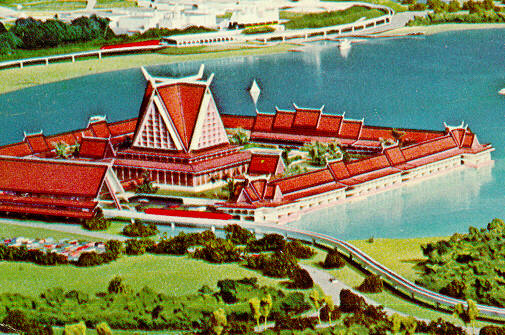 Disney's Asian Resort was one of the first Walt Disney World hotels to be designed back in the 1960's. Although it was called the "Asian Resort," it was mostly modeled after buildings and temples in Thailand. Like Disney's Polynesian Village Resort, the hotel was going to have a main building that included a restaurant and a lounge, with other buildings forming a square around the main building including about 600 guest rooms and a convention center. It was also going to be built around the Seven Seas Lagoon and have a monorail station. Sketches and drawings of the hotel showed that the entire resort features impressive Thai style architecture and furniture and would sit on a square piece of land that jetted out into the lagoon.

Many early documents included mentions of the Asian Resort. It was advertised in Walt Disney World literature before the resort opened and a plot of land was set aside for the hotel as construction on the man-made Seven Seas Lagoon started. In fact, old photographs of the lagoon show the square shaped land sitting empty next to the Magic Kingdom. An access road was once called Asian Way and a 1972 annual report mentioned that architectural designing was in progress. Construction was supposed to start in 1974, but Disney's Asian Resort was never built. Instead, the land sat empty until the project was replaced by Disney's Grand Floridian Resort and Spa in 1988. 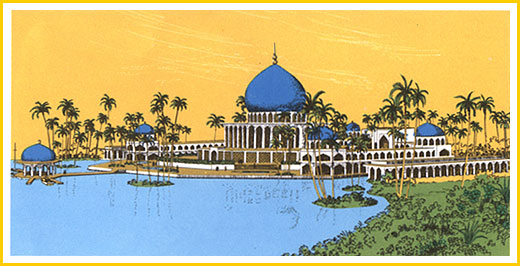 Disney's Persian Resort was another hotel planned early into Walt Disney World's history. This hotel would have actually been located on Bay Lake, just north of Disney's Contemporary Resort. Like Disney's Asian Resort, despite its name it would have been themed around one country, Iran. Early drawings and descriptions show that the buildings would have been made to look like ancient mosques with tall, white columns and large blue domes. The resort would have also been connected to the monorail system (although some plans had it connected to a separate loop that connected at Tomorrowland) and would have had a marina.  Like the Asian Resort, it would have also had a four story main building that included restaurants and shops while the guest rooms would be in separate buildings circling the main building.

Not much is else is known about the Persian Resort. It is believed that construction never stated after the 1973 oil embargo hurt the tourism industry. Rumor is that the Shah of Iran Mohammad Reza Shah Pahlavi offered to fund some of the project's construction and operation (similar to how some countries funded their pavilions as Epcot was being built) in 1978, but the 1979 Iranian Revolution caused the project to be shelved. Today, the land is still covered by natural Floridian flora as it was never cleared for construction.