5 Amazing Things You Didn't Know About These Classic Disney Entertainers 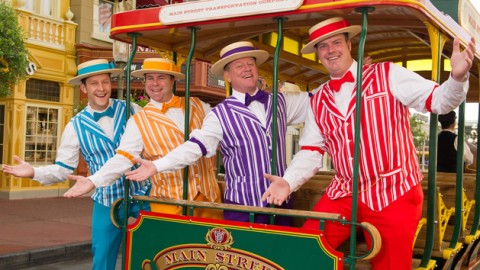 The Dapper Dans are a fascinating curiosity of theme park folklore. They debuted on television in 1961 on the counterintuitively named “The Bell Telephone Hour,” they appeared on “The Tonight Show” back when Johnny Carson was still the host, and a tertiary Modern Family character got to play one for an episode. They even provided the vocal accompaniment for Baby on Board, arguably the most famous song ever from The Simpsons.

If you’ve ever bumped into The Dapper Dans at a Disney theme park, you had to wonder about how these a cappella wunderkinds grew to become an iconic part of the experience. It’s a little weird, right? Even in a post-Pitch Perfect world, strangers don’t bike down the street as they bust out harmonies. At multiple Disney parks, however, it’s a perfectly normal part of the day. Here are several facts about The Dapper Dans you might not know.

1. A distraction with a personality 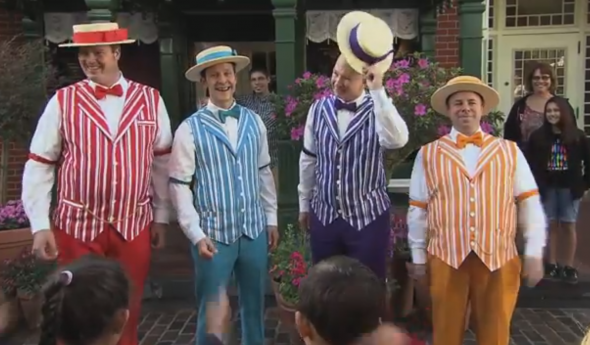 The introduction of The Dapper Dans happened by design rather than kismet. Chuck Corson held one of the most important jobs at Disneyland during its early days. He was the director of entertainment starting in 1959. Before that, he worked for Tommy Walker, who held the same position from the start of Disneyland until Corson replaced him. The two gentlemen are ultimately responsible for the legacy of The Dapper Dans.

During the first years of Disneyland, holding the position of entertainment director was a massive task with nebulous job duties. As Corson described it, Walt Disney requested that he spend some time unearthing  “atmosphere entertainment.” That’s a type of pageantry whose primary purpose is to distract park guests.

Think about atmosphere entertainment from the perspective of a park planner. They understand that the Happiest Place on Earth can feel like a misnomer for bored visitors, particularly when they’re standing in line or tired after walking all day. Intermittent performances function as pleasant distractions that will draw attention away from one’s boredom and aggravation. A live show is basically a quick hug from Disney.

In 1957, Walker and Corson decided that Main Street didn’t quite live up to its setting of the late 19th and early 20th century. They sought to add some local color to the festivities. Corson deduced that he could emphasize one of the staples of Disney animation. He could hire a barbershop quartet to perform a cappella versions of popular songs from Disney movies plus some classic turn of the century tunes for even more atmosphere. Compared to one of his other jobs, the hiring of beautiful women to act as mermaids, assembling a group of four talented singers wasn’t that difficult. It’s easier to find men who can carry a tune than to convince Miss Arizona that she won’t drown in a mermaid costume, after all.

The head of Disneyland entertainment didn’t even have a complicated strategy. He simply poached his first group of singers from a local company that wasn’t paying them as much. The Fred Waring Chorale’s loss is the theme park industry’s lasting gain.

One of the first four, T.J. Marker, proved the most important as he invented the name that stuck, The Dapper Dans. As Anderson later recounted, Marker and his team were an important addition since they do more than stand around and sing. They introduced a heightened level of showmanship thanks to their charisma and creativity. The Vaudevillian act proved much more engaging than basic singers, and the rest was history. Walt Disney himself delivered the ultimate seal of approval for the barbershop quartet. He purchased the four-seater bicycle that has become an integral part of The Dapper Dans act.

2. They’re purely American but they weren’t always that way 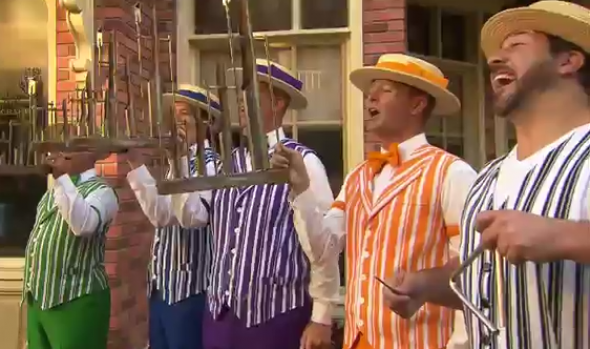 Theme park tourists fell in love with The Dapper Dans from the start. The thrill of handsome young men crooning classic Disney hits caused women to swoon and men to smile. The singers in the barbershop quartet learned over 100 songs, any of which they could add into their set on the fly. Plus, their stylish pinstriped vests and matching hats enhanced the overall experience of visiting a Disney theme park. Meeting a member of The Dapper Dans is an unforgettable moment.

When Walt Disney World debuted in 1971, park planners unanimously decided that The Dapper Dans would make their way east to Orlando, Florida. They would also stay behind in Anaheim, California, thereby creating two versions of the group. When Disney expanded across the ocean at Disneyland Paris in 1992, The Dapper Dans stamped their passports and headed across the Atlantic to their new home. There, they gained a new name, the Mainstreet Quartet. Alas, their popularity proved less appealing internationally. Only three years aft the Mainstreet Quartet harmonized for the first time, their Euro Disney act closed for good.

A similar situation unfolded at Hong Kong Disneyland. On opening day, the Dapper Dans dressed in their resplendent outfits and introduced Chinese citizens to their renditions of Disney musical standards. Yet again, the a cappella group failed to win the hearts of the locals, and only lasting three years before Disney pulled the plug. Today, The Dapper Dans are a decidedly American experience, something that only guests of Disneyland and Walt Disney World can enjoy. And if you’re wondering if Shanghai Disneyland will give them a three-year tryout, the answer is no.