This Roller Coaster was Only Open for Five Years. Here's What Went Wrong 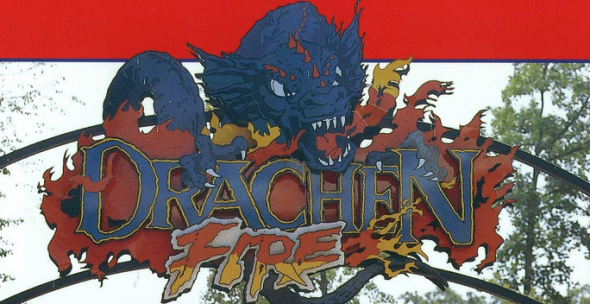 Your ride on Drachen Fire begins in the Oktoberfest section of Busch Gardens. The park is a loving and highly-detailed celebration of Europe; a place for older generations to feel like they’re back in “The Old Country” with authentic sights and sounds and smells and entertainment. The hamlet of Oktoberfest is perpetually decked out in the celebratory garments of the holiday with the smell of fresh pretzels and beer wafting through the village.

Passing alongside the park’s Festhaus, a path back into the woods leads in the direction of Drachen Fire, a distinctly thrilling steel roller coaster that offers what no other roller coaster on Earth does. And that’s not necessarily a good thing. 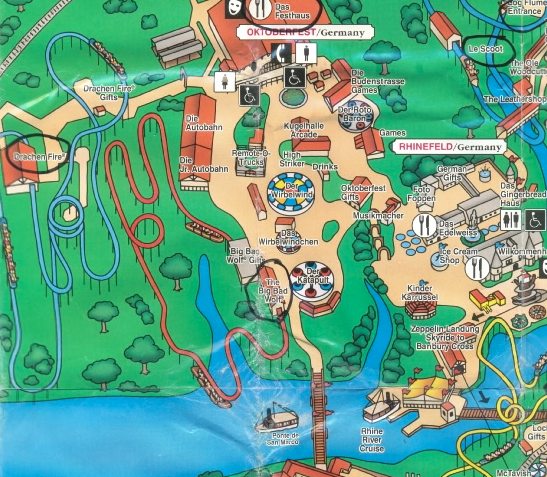 The track is vibrant sky blue, held up by off-white tubular steel supports. The queue line brings you to a blazing red train perched atop blue rails. This is it. Climbing aboard, the agonizing trip up the lift hill gives you the chance to survey the ride before you: it’s a monster, tangled and twisted and turning upside down six times. As the woods below grow further and further away, you near the top of the 150 foot tall lift hill and crest the top.

A sort of unintended signature of Arrow’s coasters (including Busch Gardens’ own Loch Ness Monster,) the first drop is a bit awkward. That’s because it’s straight as an arrow, not smoothly dipped or curved. The train levels out and accelerates down a straightaway drop. But Drachen Fire isn’t like a regular roller coaster. In fact, it’s not like any other roller coaster on Earth.

Just partway down that first drop, the train spirals up into a corkscrew. That’s right. The coaster’s first inversion is actually partway down the main drop. The train twists up into the corkscrew, sending riders upside down 120 feet over the ground. Then it spirals and curves down from there through the rest of the 145-foot drop. Just as it dips to ground level, it races back up a straightaway and over an airtime hill meant to send riders floating out of their seats.

As the train crests the hill, the next element comes into view. Arrow calls it a “batwing,” but this is the first and only Arrow coaster that features the element. It’s a staple of B&M, present on most of their Inverted coasters where it’s called a “cobra roll” – two half-loops connected by two half-corkscrews, the maneuver looks like a cobra rearing back to strike. Of course, given Arrow’s angular layout, the effect isn’t quite as sleek and serpentine as it is on your typical B&M coaster.

No matter. The train rockets out and banks to the left and up, into the ride’s mid-course brakes. From here on out, things get a little shifty.

Slowed briefly on the brakes, the train continues down a sharp hill and to the right, entering a corkscrew. Kumba has two corkscrews that interlock with each other (above). Drachen Fire attempts it, but Arrow’s bulkier, less-fluid layout means that the effect of interlocking is missing, as if someone playing Roller Coaster Tycoon couldn’t quite get the corkscrews to line-up in a convincing way.

As you rattle through this first corkscrew, the train snaps up awkwardly into an element called a cutback. Essentially an overbanked turn that’s banked enough to be considered an inversion, this rare element is only used in a handful of coasters, including Sky Rocket at Kennywood and Space Mountain: Mission 2 at Disneyland Paris.

The train exits through another few awkward transitions in the track before entering the second of the “interlocking” corkscrew pair. From there, the train helixes down through a trench and turns right before hopping up into the brakes. 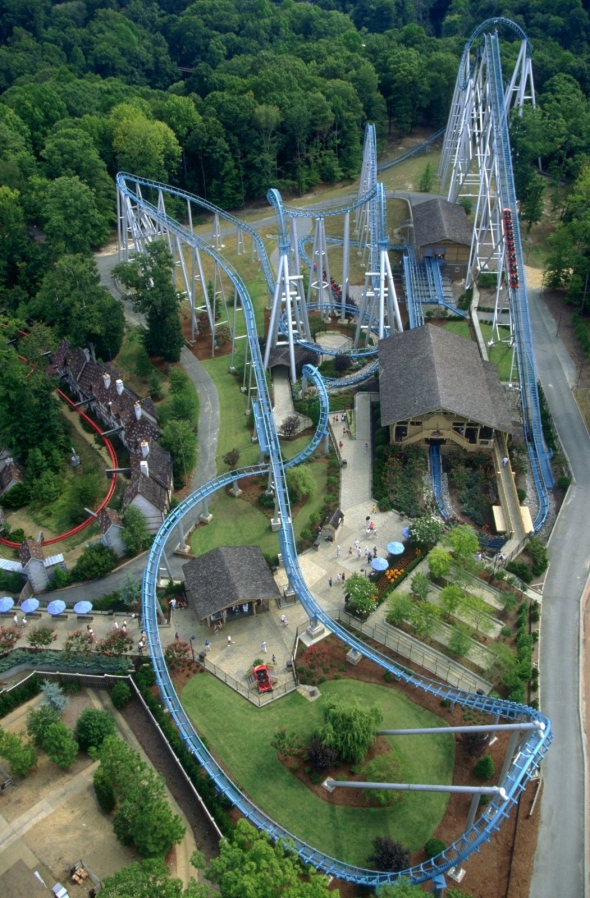 From the top of the lift hill to the final brakes, your ride on Drachen Fire is a quick one, just over a minute. But in that minute, you’ve probably lived through many things you never thought you would encounter. Drachen Fire is rough. Not in the way that a wooden roller coaster shuffles and shakes, but in the way that Arrow coasters navigate odd transitions, snapping along the track and passing too fast or too slow through different inversions. It’s strange and awkward, and not the kind of ride you’d likely be interested in riding again today. Maybe one is enough for the season. Maybe one ride is enough, period.

Don’t misunderstand: some people loved Drachen Fire. But during its short lifetime, it didn’t make too many fans. But why? Why was word-of-mouth about Drachen Fire so incredibly poor? Why did the ride gain such a reputation for roughness and discomfort? Why is it such an anomaly with such a short lifetime? To summarize it in one word:

Even if Arrow is closely associated with the dozens of Double Loops and Corkscrew roller coasters it built in the 1970s and 1980s, it was hard at work long after, too. In the late 1980s, Arrow was the force behind a multi-looping coaster model that sprang up across the United States in the form of rides like Kings Island’s Vortex (1987), Six Flags Great Adventure’s Great American Scream Machine (1989 – 2010), and Viper (1990, Six Flags Magic Mountain), Kennywood’s Steel Phantom (1991, a precursor to today’s Phantom’s Revenge) and Kings Dominion’s Anaconda (1991), averaging a half-dozen inversions as they race through double-loops, double-corkscrews, and batwing inversions.

But each of those rides has a very distinctive look and feel with Arrow’s signature crossbeam lattice support structures that look so very different from B&M’s tall, tubular supports.

With Drachen Fire, Arrow did not set out to create one of their own multi-loop roller coasters. Instead, they planned to create their best impression of B&M’s. They wanted a ride that was comparable to Kumba – a visual and spiritual sister. Using B&M’s concept, they designed a ride that, to the best of their abilities, looked like B&M’s. 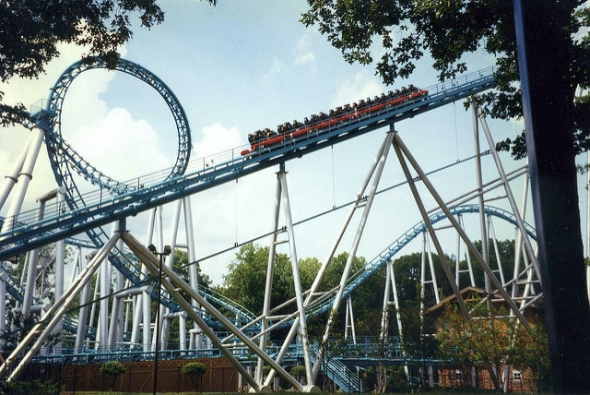 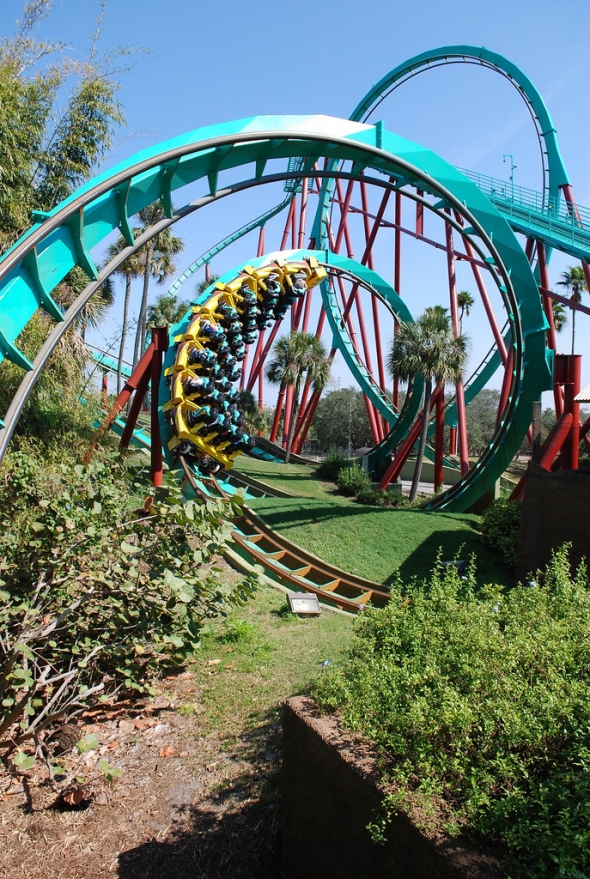 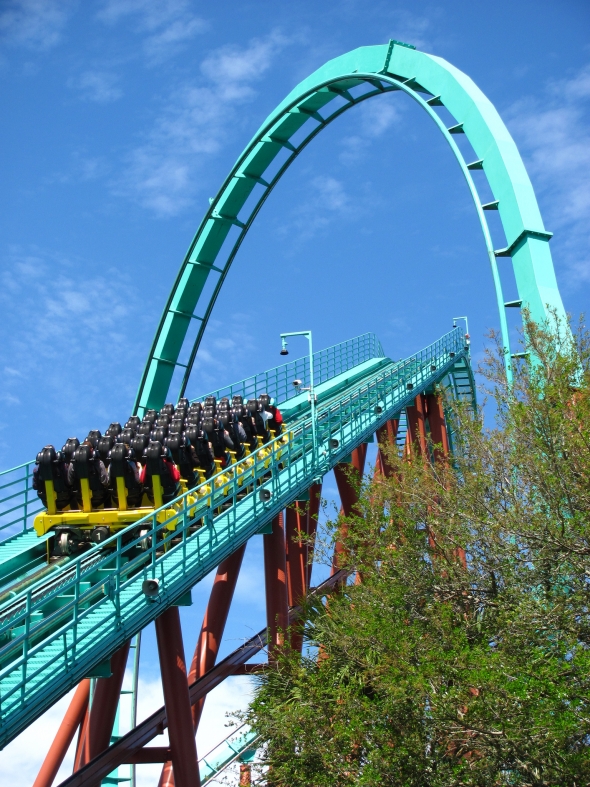 This article is awesome. I've been going to Busch Gardens Williamsburg since I was 3 and had never heard of this coaster. Too bad it was gone before I got a chance to try it out.