Disney's Animal Kingdom has always closed earlier than Walt Disney World's other parks, partly because of the need to protect its animal residents from excessive noise. However, that has all changed in 2016 with the introduction of a range of nighttime experiences - although the headline addition, the Rivers of Light show, has been pushed back to "Fall" at the earliest. 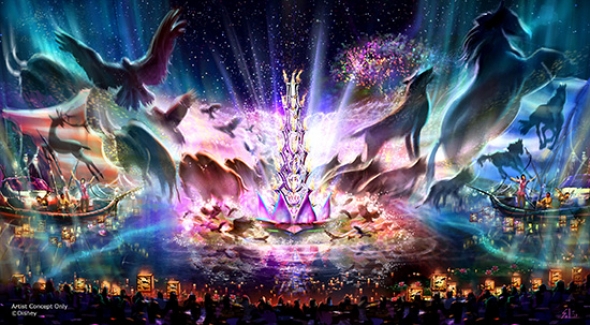 When it does finally make its debut, the show will be hosted around and above the Discovery River and promises to be spectacular. It will feature live music, floating lanterns, water screens and swirling animal imagery. 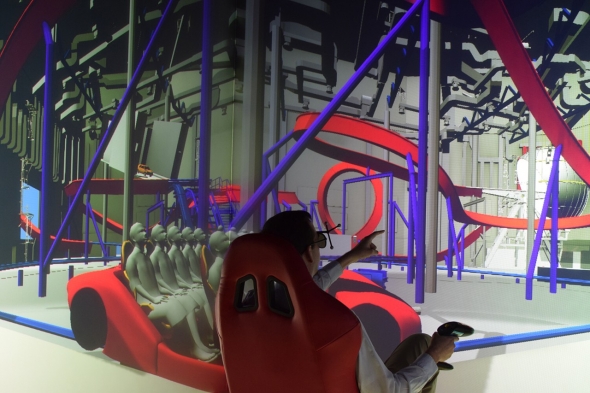 Perhaps the most intriguing of Ferrari World Abu Dhabi's THREE new roller coasters for 2016 is Mission Ferrari, an SFX Coaster manufactured by Dynamic Attractions. That's the same firm behind Harry Potter and the Escape from Gringotts at Universal Studios Florida, and this will be a similar construction, even if it may lack the astonishing level of theming of the Universal ride. 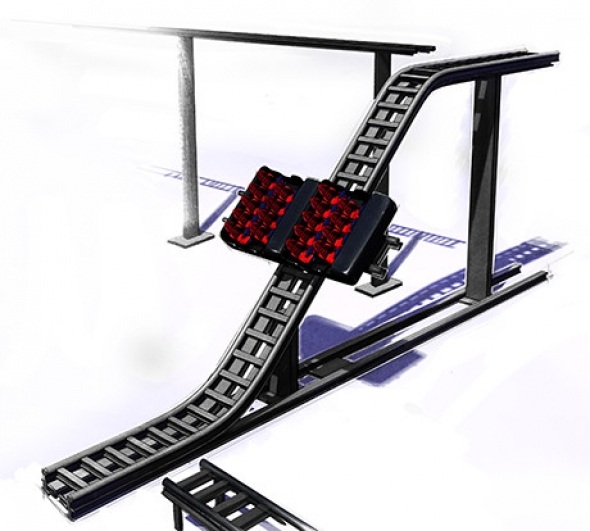 SFX Coasters are capable of a wide range of impressive maneuvers.Image: Dynamic Attractions

Relatively little has been confirmed about Mission Ferrari, but the few leaks and sneakily-captured construction photos so far suggest that it will feature at least two inversions, along with Gringotts-style elements such as a drop track, tilt track, 3D movie screens and a launch or two.

How impressive will the final product be? We'll have to wait until later in the year to find out.

Housed in Carowinds' renovated Action Theater and new for the 2016 season, Plants vs Zombies Garden Warfare: 3Z Arena is billed as the world's first "intra-active" 3-D attraction. The experience is based on the wildly popular video game series and has been created in a partnership with creators PopCap and EA.

The audience will be divided into two teams, each housed on 34 motion-based seats that are equipped with a hand-held laser gun. Each team will have a giant screen in front of them, witnessing a frenzied battle against the opposing team and attenpting to influence it using their own laser. Every guest will receive an individual score, which they can purchase as an "on-ride" photo on exiting. 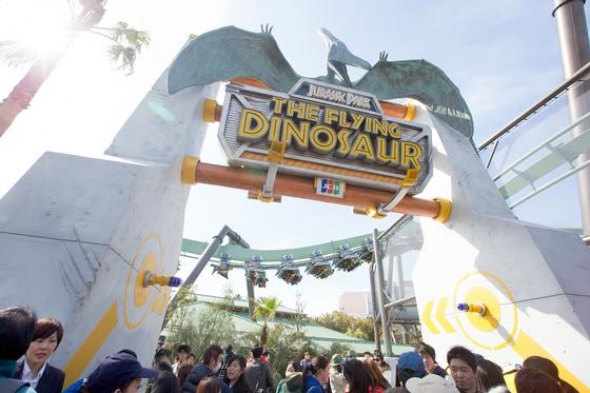 Universal Studios Japan's major new addition for 2016 is The Flying Dinosaur, rumored to have cost as much as $90 million to build. It made its debut in March, allowing the park to cash in on continuing interest in the Jurassic Park franchise following the box office success of Jurassic World last year. 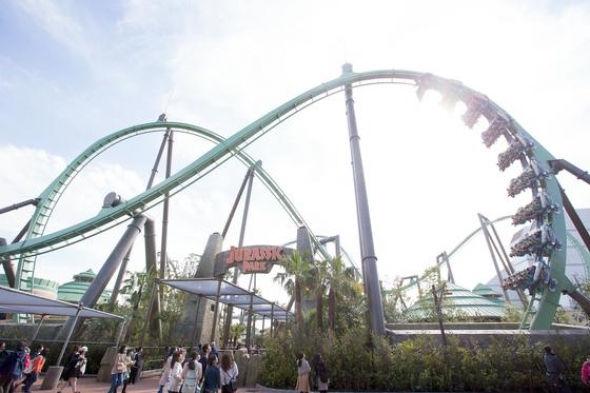 The storyline behind the attraction is that the owners of Jurassic Park have long dreamed of creating a ride that would allow guests to fly through the sky with wild pteranodons. Finally, they managed to train the pteranodons - but their behavior is still unpredictable.

In reality, guests board the longest Bolliger & Mabillard Flying Coaster in the world, featuring a 124-foot first drop and a 3,688 feet circuit. They then soar over much of the Jurassic Park area of Universal Studios Japan, making this a ride that's almost as fun to watch as it is to experience. 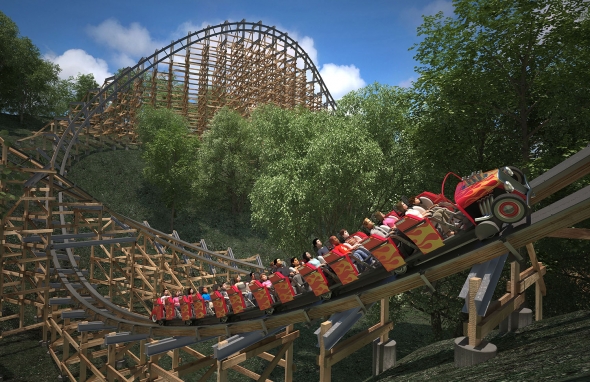 Dollywood has splurged an estimated $22 million on its new addition for 2016, and Lightning Rod is certainly an ambitious concept. Themed after a tricked-out 1950s-era hot rod, the ride is billed as the first wooden coaster in the world to use a launch system instead of a traditional lift hill. 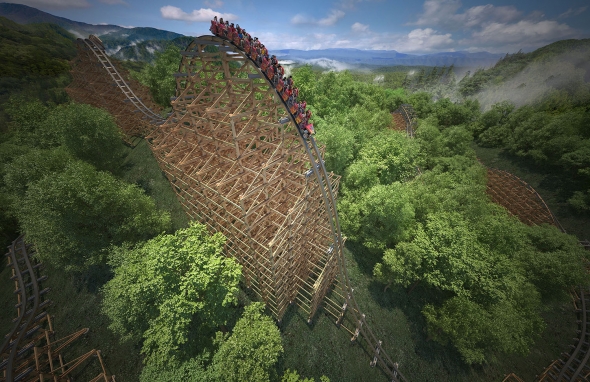 Riders will be launched from 0 to 45 miles per hour before racing around a 3,800 foot circuit that includes a 165 foot drop. At the foot of the hill, the trains will reach 73 miles per hour, making Lightning Rod the fastest wooden coaster in the world. 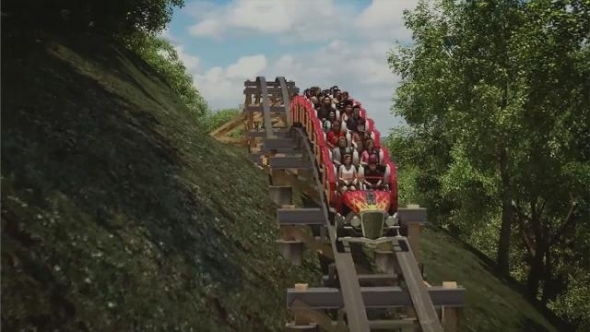 As is often the case with "world's first" coasters, Lightning Rod has encountered some teething issues. Originally due to open with the rest of the park in March, the ride's opening was delayed after manufacturer Rocky Mountain Construction found that the third-party launch system "would not be able to perform at the level required for proper operation." It is now expected to open some time in May. 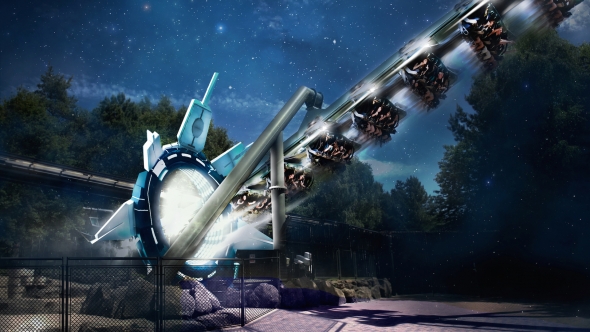 Technically speaking, Alton Towers' "new" attraction for the 2016 season is nothing of the sort. Instead, it is a major overhaul and retheme of the existing Air roller coaster, which has been at the park since 2002 when it debuted as the first ever Bolliger & Mabillard Flying Coaster. It sees riders rotate into a position facing the ground in what is a remarkably smooth simulation of "flying", but the original Air faced criticism for its general lack of theming after cost overruns forced the scenery to be scaled back. 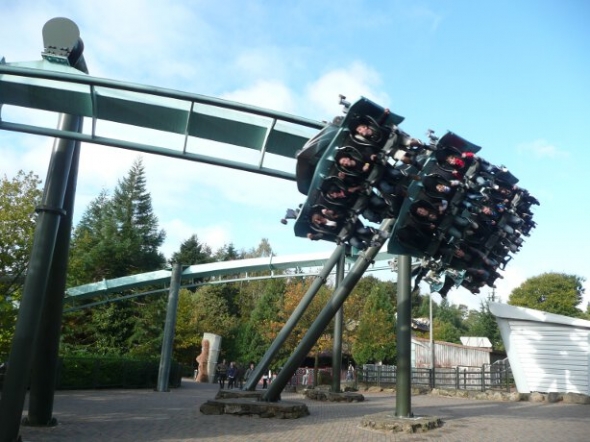 Air in its original form.

Galactica (as the coaster is now known) merits its inclusion in this list because of a fundamental change to its ride experience. Riders now have the option of wearing a virtual reality headset, which is attached to their seat. As the train travels around its circuit, they experience a "flight" into outer space, with the movements of the coaster being synchronized to what they see on screen. A number of different destinations are on offer, with guests able to choose which one to head to. 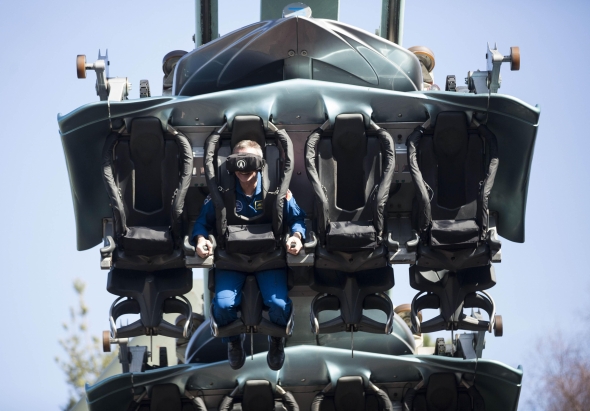 There are issues with the new system. Early reviews suggest that loading times (already pretty slow on the original Air) are now extremely lengthy, due to the need to wipe down the headsets after each use. And it seems there's still work to do to create a truly coherent simulation of a flight into space. But as a proof-of-concept, Galactica works. 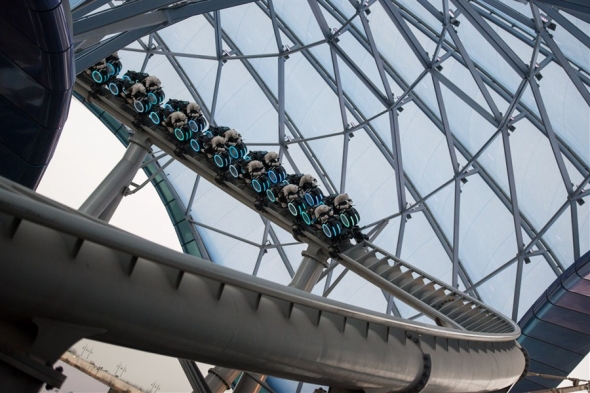 It's been a long, long road to get to this point, but Disney's first theme park in mainland China will finally open to guests in June 2016. TRON Lightcycle Power Run will dominate the Tomorrowland area of the park, offering an all-new experience different to anything found at an existing Disney park.

The ride will be housed inside an impressively huge color-shifting canopy, which will be the signature element of Shanghai Disneyland's Tomorrowland in the same way that Space Mountain dominates the area at several of Disney's other parks. The undulating canopy will be covered in a translucent material that reveals the pulsing glow of Lightcycle trains as they race around the interior. 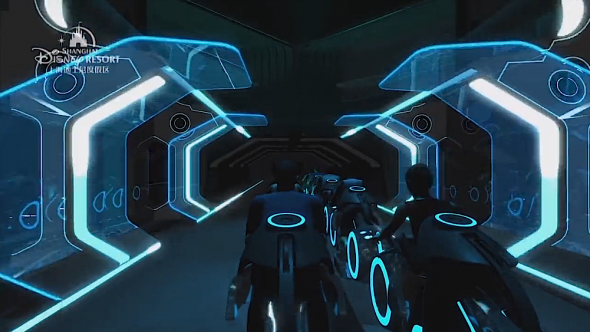 Inside, guests will board a motorbike-style coaster, boarding individual Lightcycles that are launched across the initial section of track (dubbed the Upload Conduit) before diving into the "game world", packed with light and sound effects. 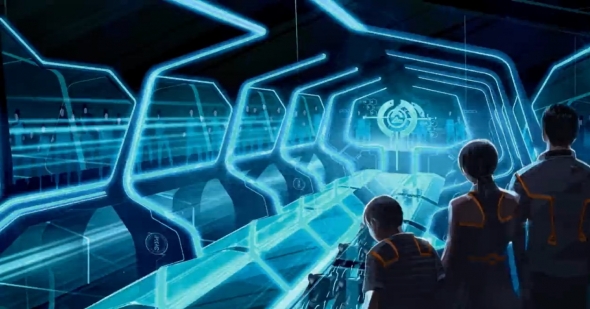 Even at this late stage, there are few hard statistics on the coaster itself, although it will be a customized variant of Vekoma's existing motorbike coasters (Vekoma has partnered with Disney on numerous coaster projects in the past). The ride won't be contained completely indoors, with the trains bursting outside in one section. 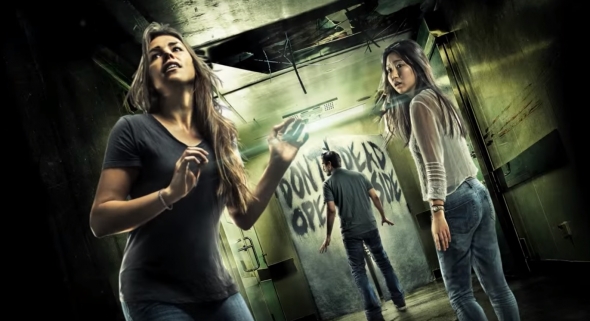 Universal Studios Hollywood and AMC have confirmed that a year-round experience based on The Walking Dead is coming to the park in summer 2016.

The walkthrough maze is set to feature much more impressive sets than the temporary ones that are usually seen at the park for Halloween Horror Nights, including a recreation of the infamous "Don't Open / Dead Inside" hospital doors. Scenes will include recognizable locations from every season of The Walking Dead, and will feature both live actors and animatronic figures built by K&B Effects, who provided the props for the show itself.

7. Pirates of the Caribbean: Battle for the Sunken Treasure (Shanghai Disneyland) 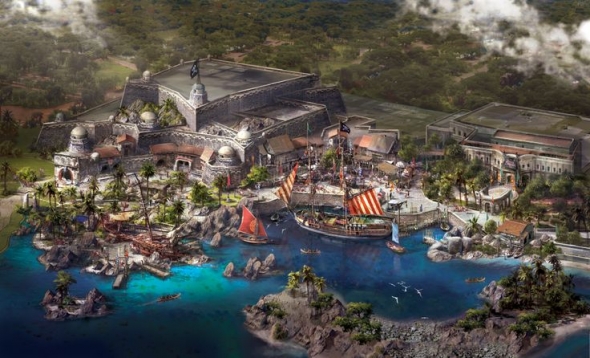 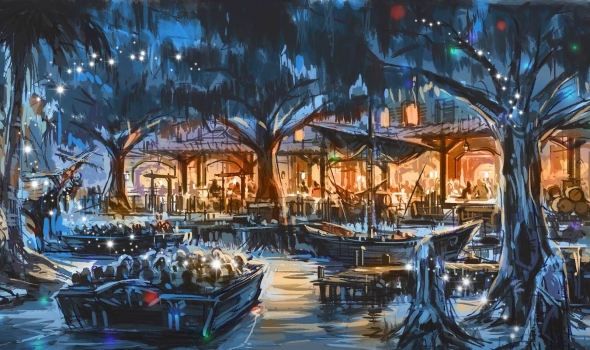 Guests will be taken down to the ocean depths, into the interior of pirate ships, and finally into the midst of a raging naval battle, with Disney promising that never-before-used technologies and effects will result in a stunning experience. 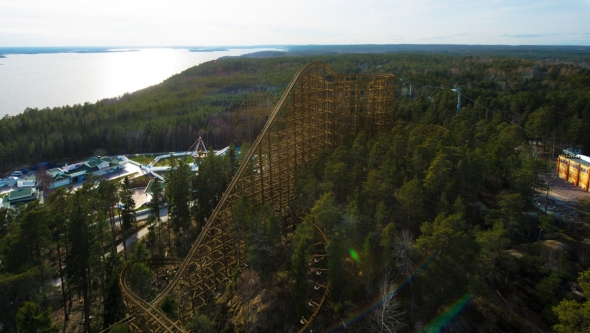 Wildfire will be the fastest wooden coaster in Europe at 70 miles per hour, and the second tallest in the world at 187 feet. Like many modern wooden coasters, it will include inversions - 3 of them - and a series of 12 airtime hills. 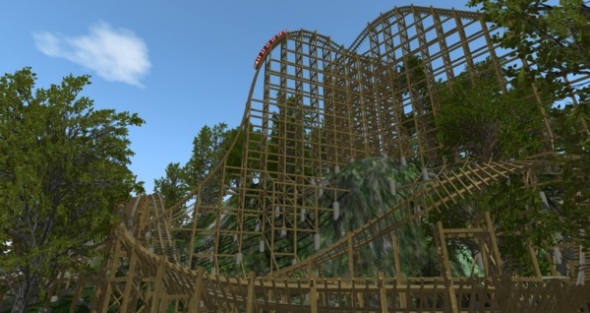 Due to open in June, Wildifre is a Rocky Mountain Construction creation - the firm's first in Europe. Vekoma will help out by manufacturing the power and control systems, with RMC producing the track and trains.

The Kolmården Wildlife Park is primarily a zoo, and riders on Wildfire are likely to feel close to nature as they race through a spectacular woodland setting.