Behind the Ride: 3 Mind-Bending Tricks Employed by Splash Mountain 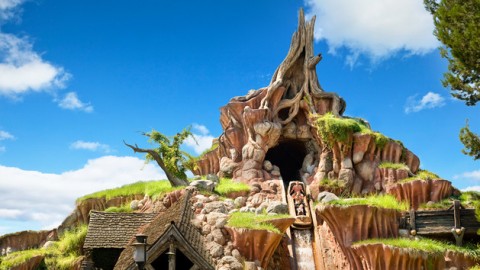 Song of the South is arguably the most controversial animated film ever produced by Walt Disney. It’s also one of the few that Uncle Walt chose not to release under his own umbrella, instead choosing RKO Radio Pictures as the distributor for his first movie to include live actors. You almost certainly know of the contentions about Song of the South’s shortcomings. That’s why the everlasting popularity of the Disney park attraction based on the film is so remarkable. It’s able to overcome a negative stigma, warming the hearts of generations of theme park tourists. How does this ride accomplish such an impressive feat? Let’s go behind the ride to learn many of the best tricks employed at Splash Mountain.

The Experience: Delayed gratification as an art form 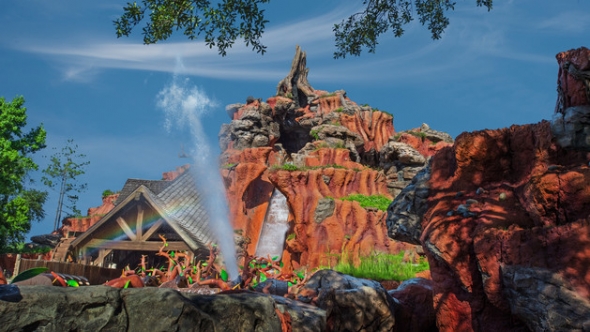 A lot of Disney visitors are under the impression that Splash Mountain is one of the oldest attractions at Disneyland and Walt Disney World. In truth, it only dates back to 1989 at Anaheim and 1992 at Orlando. When conceptualizing the idea of a ride with a watery landing, Disney’s Imagineering team understood that log flume rides with aquatic finishes weren’t unusual, even for the late ‘80s. In order to craft an attraction worthy of the Disney brand, they’d have to differentiate their experience. Even if they achieved that, however, they’d still need to put the splash in Splash Mountain. Otherwise, they’d disappoint and frustrate their guests.

Disney’s brilliant park planners deduced that they could enhance the ride simply through a strong visual display. You know the one I mean. The man-made structure of Splash Mountain chases away all the cowards who fear the thought of getting doused with water. Whereas most log flume attractions are fast and to-the-point, Disney went a different way with Splash Mountain. It uses several false finishes to confuse and delight park visitors. They see the giant drop at the end of the ride as they approach the attraction. Then, the line queue provides several more up-close perspectives of giddy guests suffering the wrath of a tsunami.

The idea is to keep the idea of the final splashdown in the rider’s head the entire time they wait in line. Then, theme park tourists used to a straight up then straight down log flume experience will fall for the twist at the first turn. They’ll think they’re about to receive a face full of water, only to recognize that they’ve been tricked. It’s devious at first, and then Splash Mountain stretches out the gag by doing it several more times. By the time the rider gets to the actual precipitous drop, they’re no longer sure what to believe, thereby feeling a different type of surprise when the water bombards them. It’s a masterful type of psychological manipulation that Disney employs to euphoric effect. Few first-time riders exit Splash Mountain without a smile on their faces.

The Trick: Emphasizing the joy via subtle manipulation 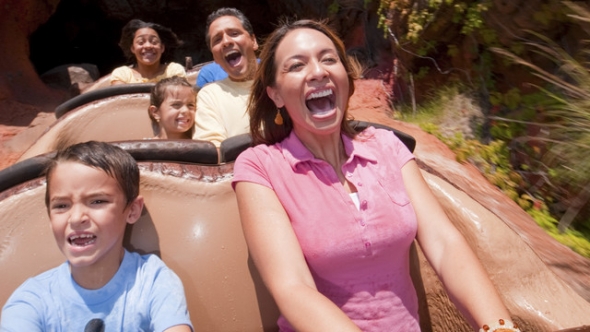 If you look for a video release of Song of the South, you won’t find it. Disney has wisely chosen never to distribute the film due to some…unfortunate aspects. What Disney’s programmers learned during the first 20 years of Disneyland surprised them. Some of the characters from Song of the South were among the most popular roaming mascots at the park. Whenever Brer Bear, Brer Fox, and Brer Rabbit walked around Disneyland, a crowd of kids mobbed them. Disney saw an opportunity to redeem them if not the film itself.

Let’s ignore the movie’s divisiveness for a moment, instead focusing on the Disneyland experience from a child’s perspective. They’re at the Happiest Place on Earth, the dream destination of anyone who still describes their age with the modifier, “X Years…and a half.” When they see a furry bear, fox, or rabbit, what’s their natural instinct? Children live in a hugger culture, and fuzzy animals are the cuddliest. You could start an animated series tomorrow with a bear, fox, and rabbit, and you’d immediately have the attention of merchandisers across the land. In other words, Disney boldly chose not to throw the baby out with the bath water when it came to the characters of Song of the South.

How could they emphasize the good while glossing over the bad? I would imagine that was the subject of many tense staff meetings during the 1980s. As always, Disney found the answer through anthropomorphic animals. They chose to re-tell the exciting adventures of Brer Rabbit using standard Disney staples: splashy colors and child-friendly set designs. The emphasis of the entire attraction is silliness for the sake of joy. 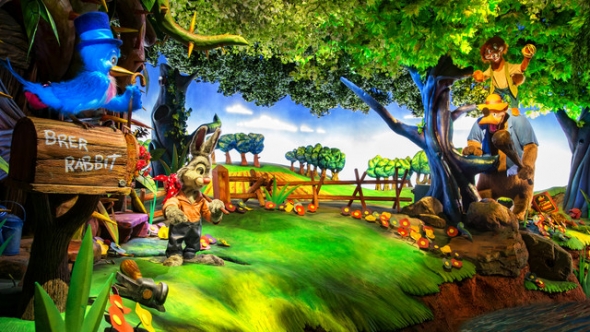 After the initial swerve of a fake splashdown, the first set piece introduces the rider to Brer Frog. His primary purpose is to warn of the conflict between Brer Rabbit and Brer Fox.This tactic proved to be a brilliant way to place the focus on the attraction and its goofy characters rather than an unfortunate cinematic blemish on Walt Disney’s resume. Still, when the time came to recreate the climactic events of the Brer Rabbit story, Disney chose a beehive full of honey rather than…the other thing.